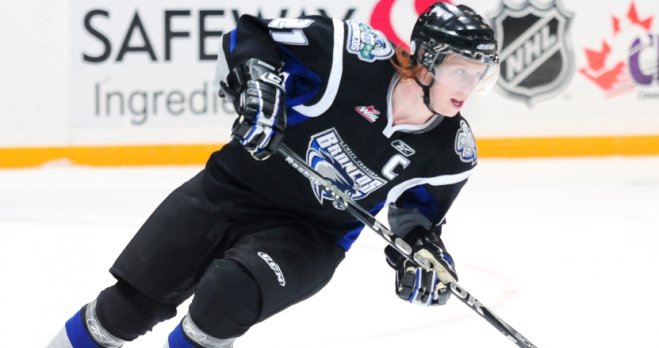 Swift Current, SK – Swift Current Broncos’ General Manager and Head Coach Mark Lamb has announced today that that the club has traded Broncos forward Cody Eakin for Kootenay Ice forward Christian Magnus, listed players Ryan Bloom, Jarett Zentner, Colby Cave and Steven Myland along with a 1st and 2nd round pick in 2011 and a 3rd round pick in 2012.

Magnus, the 5’11”, 174 pound forward from Saskatoon, SK is currently in his fourth WHL season.  In 42 games played with the Ice this season, he has accumulated 17 points through five goals and 12 assists.  Magnus is returning to the Broncos after originally being drafted by them in the 1st round, 9th overall in the 2007 WHL Bantam Draft.

Bloom, the 5’10”, 171 pound forward from Calgary, AB has collected 21 points through seven goals and 14 assists in 20 games played this season with the Drumheller Dragons of the Alberta Junior Hockey League (AJHL).  In the six games he has played with the Ice, he recorded one point through one goal.  Bloom was drafted by the Ice in the 2nd round, 37th overall in the 2008 WHL Bantam Draft.

Zentner, the 6’2”, 190 pound forward from Red Deer, AB started the 2010/11 season with the Okotoks Oilers before joining the Calgary Mustangs of the AJHL. In 20 games played with the Oilers this season he has collected four points through two goals and two assists.  In the seven games he has played with the Ice he has recorded one assist.  Zentner was drafted by the Ice in the 4th round, 81st overall in the 2008 WHL Bantam Draft.

Cave, the 6’0”, 170 pound forward from Battleford, SK is currently playing with the Battlefords Stars of the Saskatchewan Midget AAA Hockey League (SMAAAHL).  In 30 games played this season, he has 10 goals and 10 assists for 20 points.  Cave was drafted by the Ice in the 1st round, 13th overall in the 2009 WHL Bantam Draft.

Myland, the 6’0”, 210 pound goalie from Cloverdale, BC is currently playing with the Valley West Hawks of the British Columbia Major Midget Hockey League.  This season, he currently holds a1.64 goals against average and save percentage of 0.934.  Myland was drafted by the Ice in the 10th round, 211th overall in the 2009 WHL Bantam Draft.

“Both Magnus and Bloom will bring depth to our team,” says Broncos Assistant General Manager Jamie Porter.  “Zentner, Cave and Myland have all been playing strong for their respective teams and will be great additions to our organization as well.”

Eakin leaves Swift Current after four seasons with the Broncos.  He was acquired in the 2006 WHL Bantam Draft in the 1st round, 6th overall.  In the last four seasons, Eakin has recorded 100 goals and 95 assists for 195 points in 212 games played.

“Eakin has been the best player to come to this team since Joe Sakic,” says Broncos General Manager and Head Coach Mark Lamb.  “It’s a trade we didn’t want to do, but it’s the best thing for our hockey club in the long run.”

Both Magnus and Bloom will be joining the Broncos for Friday’s game against the Saskatoon Blades.  Zentner, Cave and Myland will remain with their respective clubs.

The Swift Current Broncos Hockey Club would like to wish Cody Eakin all the best in his future endeavours.

“This was not an overnight decision and as an organization we have had ongoing discussions on how to improve our Hockey Club to challenge for a WHL Championship this season.  We have acquired one of the WHL’s premier offensive players which will add offense to an already balanced team.  To get a player the caliber of Cody Eakin you have to give up a lot and we feel we definitely stepped up to the plate and parted with very good players and  very high draft picks.  We appreciate the quality of the people and players going to Swift Current and we wish them all the best in the future,” added Chynoweth.

Cody Eakin suffered a minor hand injury playing for Team Canada at the 2011 World Junior Hockey Championships in Buffalo, NY and is expected to be out of action one to two weeks.