Broncos’ Heponiemi named WHL On the Run Player of the Week 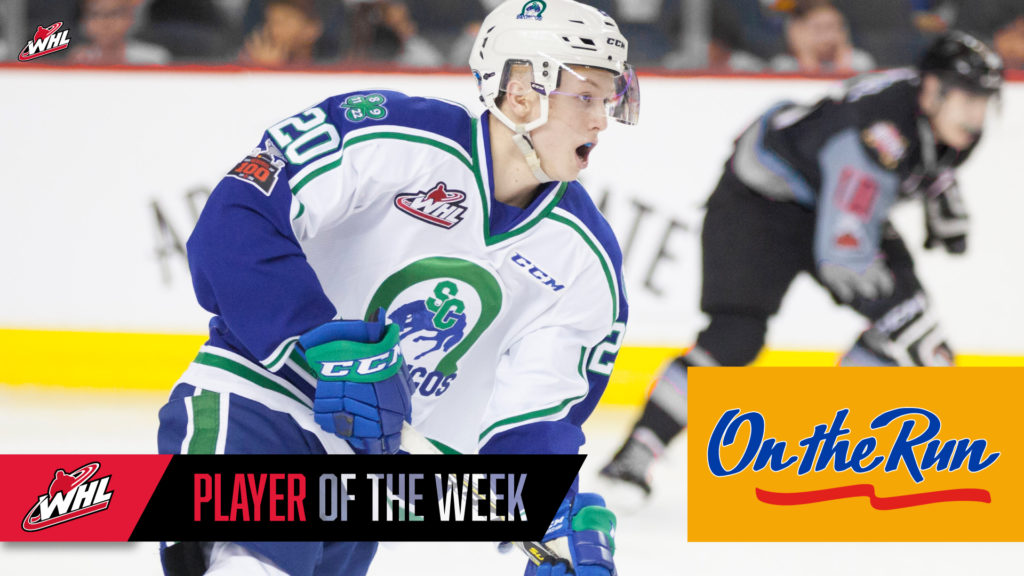 Calgary, Alta. – The Western Hockey League announced today that Swift Current Broncos forward Aleksi Heponiemi has been named the WHL On the Run Player of the Week for the week ending April 22, 2018.

Heponiemi, who was selected by the Florida Panthers in the second round, 40th overall, of the 2017 NHL Draft, recorded six points (2G-4A) and a plus-six rating as the as the Broncos advanced to the Eastern Conference Championship for the first time since 2001 and moved up 2-0 in the series against the Lethbridge Hurricanes.

In Monday’s Game Seven against the Moose Jaw Warriors, Heponiemi recorded a pair of primary assists in his team’s 6-0 win to advance to the conference championship. Heponiemi’s assists came on Swift Current’s second and fifth goals in the game.

In the series-opening game against the Hurricanes Friday, Heponiemi tallied the game-winning goal and an assist for multi-point effort in a 3-2 victory. Heponiemi collected a primary assist on Swift Current’s second goal, then scored the decisive goal in the third period against Hurricanes’ goaltender Logan Flodell. For his efforts, Heponiemi earned first star honours in the game and second star honours for the night across the WHL.

In the second game of the series Saturday, Heponiemi contributed another goal and an assist in his team’s 4-3 overtime victory. Heponiemi once again scored in the third period, serving as the game-tying goal before the Broncos won in overtime. Heponiemi also collected an assist on Swift Current’s first goal of the game. He was named the second star of the game.

In the 2016-17 season, Heponiemi has named the recipient of the Jim Piggott Memorial Trophy as the WHL’s Rookie of the Year. This season, he was named to the Eastern Conference First All-Star Team.

Skinner and the Broncos will be looking to take a 3-0 series advantage against the Hurricanes Tuesday, April 24 (7:00 p.m. MT) when the Eastern Conference Championship shifts to the Enmax Centre in Lethbridge, Alta. for Game Three of the best-of-seven series.