Broncos’ Heponiemi named WHL on the Run Player of the Week 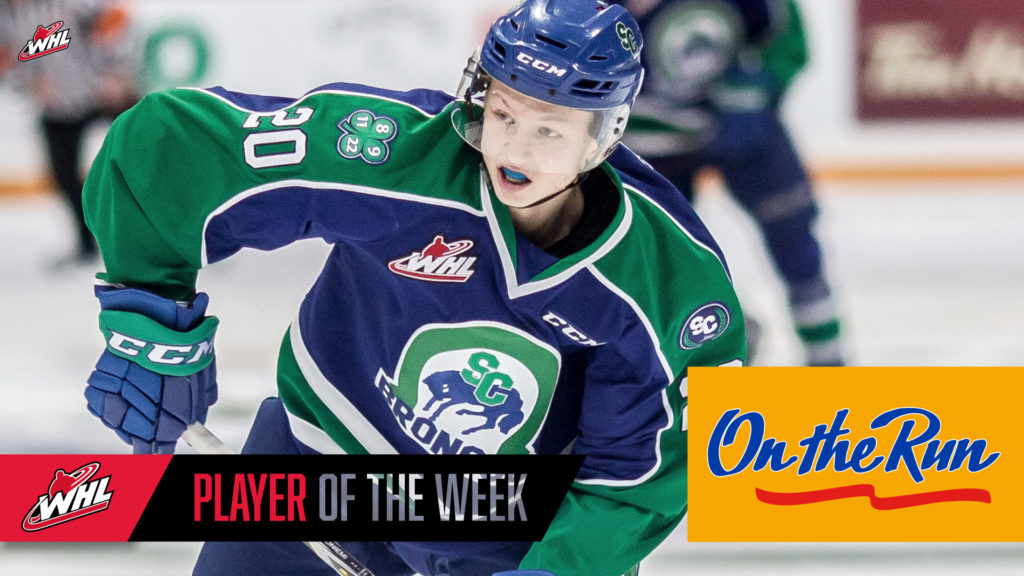 Calgary, Alta. – The Western Hockey League announced today Swift Current Broncos forward Aleksi Heponiemi has been named the WHL On the Run Player of the Week for the week ending November 12, 2017.

A second-round selection, 40th overall, of the Florida Panthers in the 2017 NHL Draft, Heponiemi recorded nine points (2G-7A) in two games to help the Broncos to a pair of victories, allowing them to stay in the thick of a tight East Division race.

Friday in Saskatoon, Heponiemi recorded a goal and five points. He picked up primary assists on two of the Broncos’ first three goals and scored the team’s fourth goal of the game on the power play in the first period.

Saturday at home against the Lethbridge Hurricanes, Heponiemi had one goal and four points in a 6-0 victory over their Central Division opponents. The 5-foot-10, 141-pound product of Tampere, Finland scored the game-winning goal 12 seconds into the contest and also earned a pair of primary assists.

In 89 career WHL games with the Broncos, Heponiemi has recorded 132 points (42G-90A), including 10 power play goals and seven game-winners.

Originally selected in the first round, 10th overall, by the Broncos in the 2016 CHL Import Draft, Heponiemi’s offensive surge has put him into a tie with teammate Tyler Steenbergen for the league lead with 46 points. Heponiemi’s 46 points (14G-32A) have seen him record points in 15 games this season, including an active nine-game point streak. He has 13 multi-point games, including three five-point efforts this season.

Heponiemi and the Broncos are back at home Tuesday, November 14 (6:00 p.m. MST) to host the Moose Jaw Warriors.