Broncos’ Gennaro named WHL On the Run Player of the Week 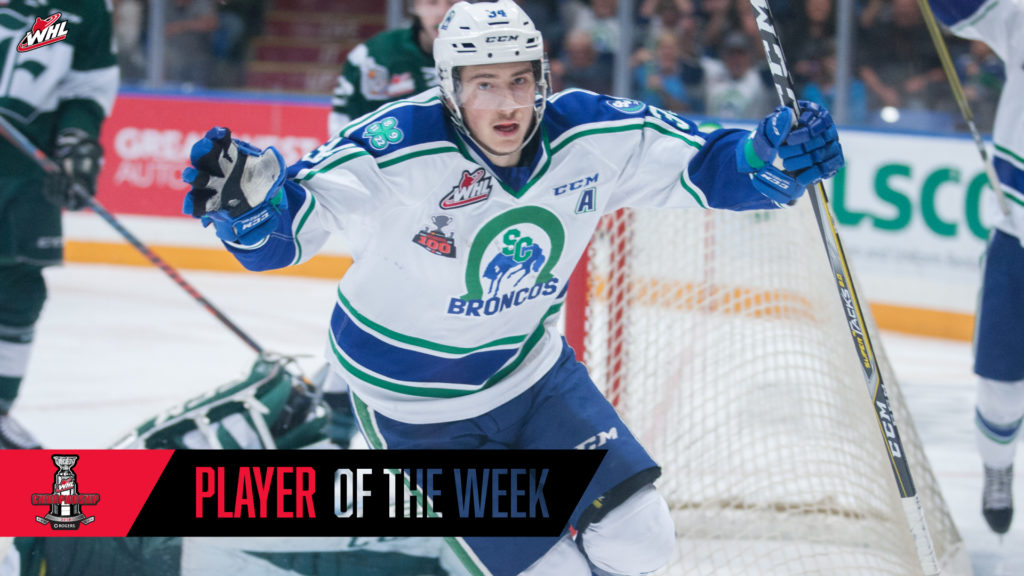 Everett, Wash. – The Western Hockey League announced today that Swift Current Broncos forward Matteo Gennaro has been named the WHL On the Run Player of the Week for the week ending May 6, 2018.

Gennaro recorded six points (2G-4A) and a plus-six rating in three games as the Broncos advanced from the Eastern Conference Championship to the 2018 Rogers WHL Championship Series and split the first two games of that best-of-seven series against the Everett Silvertips.

Monday, Gennaro tallied a goal and an assist as the Broncos won the Eastern Conference Championship with a 5-1 result over the Lethbridge Hurricanes. Gennaro scored the Broncos’ first of three goals in 96 seconds as they took over control of the game and the series. Gennaro also earned an assist on Swift Current’s fifth goal of the contest to seal the victory.

In Game One of the WHL Championship Friday, Gennaro earned a primary assist on Swift Current’s lone goal in a 2-1 loss to the Silvertips.

Gennaro and the Broncos struck back with a 4-3 overtime win in Game Two, with the St. Albert, Alta. product scoring a goal and adding a pair of assists. Gennaro’s goal was Swift Current’s first of the game and helped spark a comeback by the home side that ended with him also collecting primary assists on the Broncos’ third and fourth goals of the game.

All six of Gennaro’s points came at even strength. Through 22 games in the 2018 WHL Playoffs, Gennaro has 16 points (9G-7A). He’s had six goals on the power play and one game-winning goal. This week marks the second time during the 2017-18 WHL season Gennaro has earned WHL On the Run Player of the Week honours.

Originally selected in the second round, 41st overall, by the Prince Albert Raiders in the 2012 WHL Bantam Draft, the 6-foot-3, 198-pound Gennaro capped off the regular season portion of his WHL career in March. In 338 games between the Raiders, Calgary Hitmen and Broncos, Gennaro had 248 points (124G-124A), including 34 power-play goals, five short-handed goals and 16 game-winning goals.

With the 2018 Rogers WHL Championship Series tied 1-1, the series has now shifted to Everett, Wash. for the next three contests, beginning with Game Three at Angel of the Winds Arena on Tuesday, May 8, 2018 (7:05 p.m. PST).