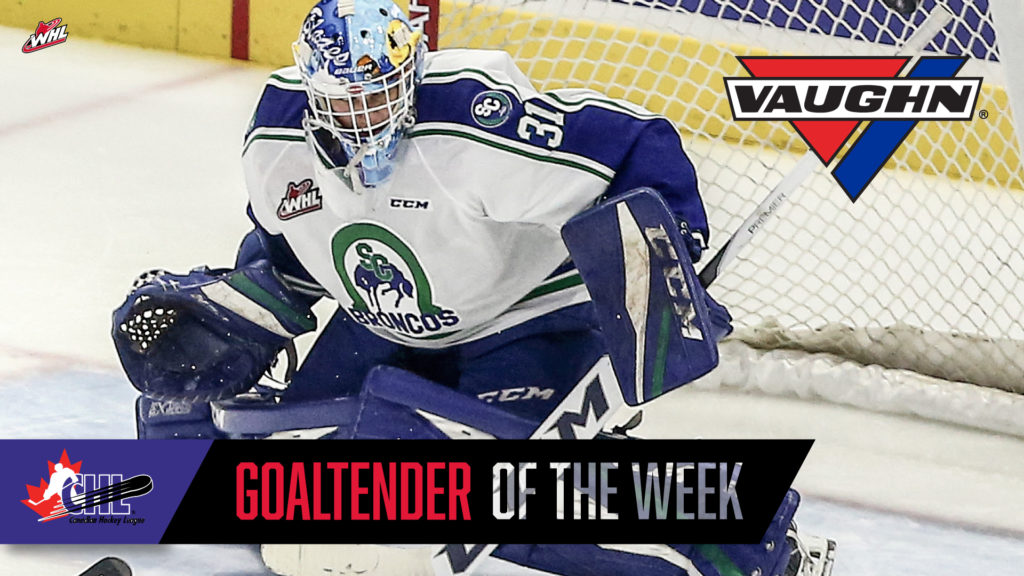 Toronto, ON – The Canadian Hockey League today announced that Logan Flodell of the Swift Current Broncos is the Vaughn CHL Goaltender of the Week for the week ending October 15 after posting a 2-0-0-0 record including a shutout victory with a goals-against-average of 1.00 and save percentage of .976.

Flodell turned aside 83 shots in a pair of victories last week that helped the Broncos extend their winning-streak to eight games to open the 2017-18 campaign.  On Tuesday night he made a career-high 45 saves and earned third star honours in a 6-2 win over the Lethbridge Hurricanes, then picked up his first shutout of the season on Friday in a 1-0 triumph over the Vancouver Giants earning first star honours following his 38-save performance.

A 20-year-old from Regina, Sask., Flodell is playing in his fourth WHL season and first with the Broncos after being acquired from the Saskatoon Blades where he played in 48 games during the 2016-17 campaign.  Originally a third round pick of the Seattle Thunderbirds in the 2012 WHL Bantam Draft, Flodell leads the league with a 7-0-0-0 record and is tops in both goals-against-average and save percentage with marks of 2.00 and .940 respectively.