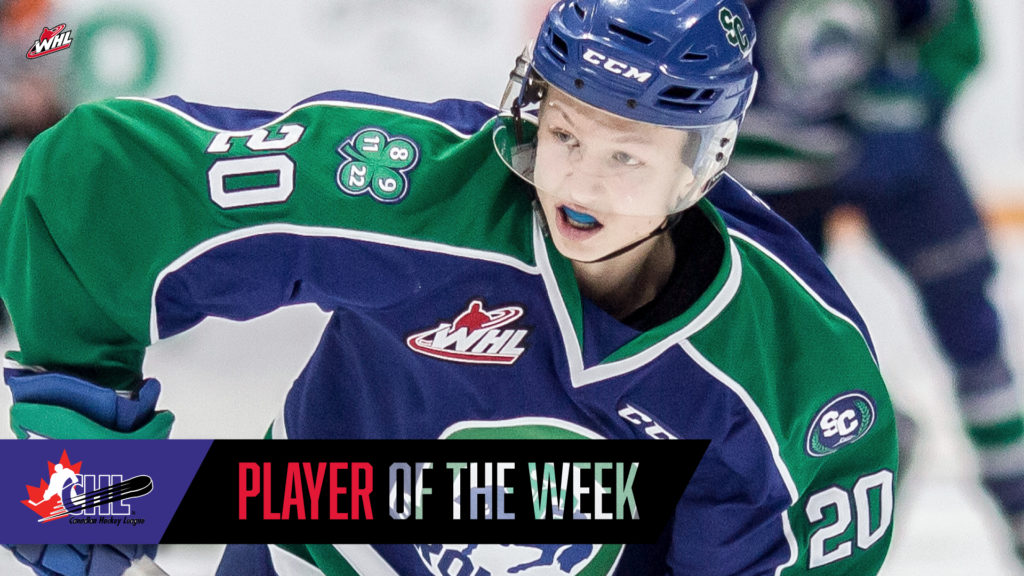 Toronto, ON – The Canadian Hockey League today announced that Florida Panthers prospect Aleksi Heponiemi of the Swift Current Broncos is the CHL Player of the Week for the week ending November 12 after recording nine points in two games including two goals and seven assists.

Heponiemi produced a pair of multi-point performances last week for the Broncos who picked up two wins to keep pace in the competitive WHL East Division where they rank second with a 13-3-1-0 record.  On Friday night he collected his third five-point effort of the season with a goal and four assists as part of a 6-4 road win against the Saskatoon Blades, then scored once with three assists on Saturday earning third star honours in a 6-0 win against the Lethbridge Hurricanes.

The 18-year-old, 5-foot-10, 141-pound product from Tampere, Finland, Heponiemi is playing in his second WHL season after being selected by the Broncos tenth overall in the 2016 CHL Import Draft.  The second round pick by the Panthers in the 2017 NHL Draft is now tied atop the WHL’s scoring race with teammate Tyler Steenbergen with 46 points including 14 goals and a league-high 32 assists in 17 games.

Originally selected in the first round, 10th overall, by the Broncos in the 2016 CHL Import Draft, Heponiemi has recorded 132 points (42G-90A), including 10 power play goals and seven game-winners in 89 regular season games with the Broncos.

The award marks the fifth time this season that a WHL player has won the award, including Heponiemi’s teammate Steenbergen, who won the award in the second week of the season.