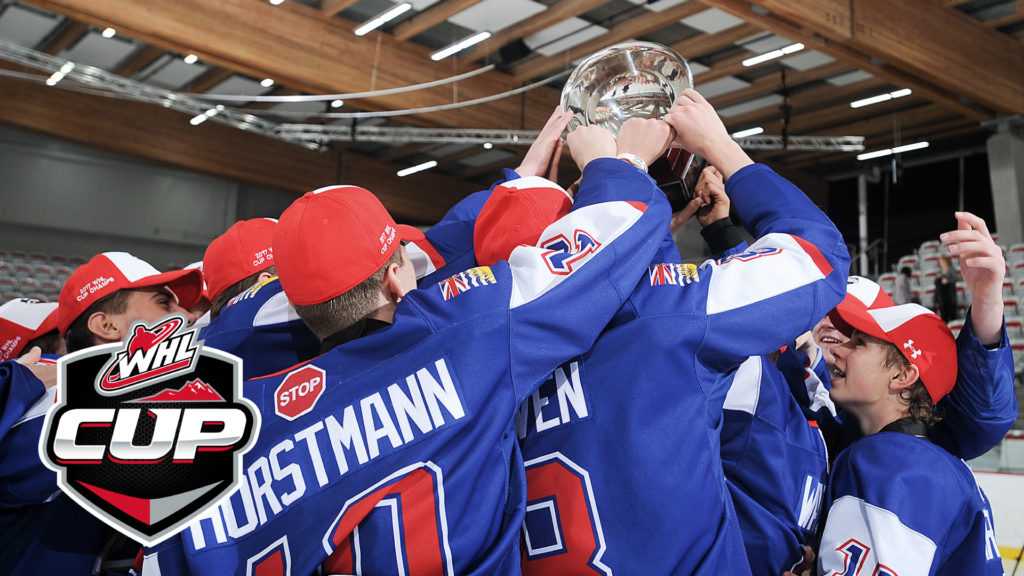 In one way it was an atonement for last year’s overtime loss. In another sense, it was the ending of a different chapter by a different 20-man roster, one that didn’t start out the tournament on the right foot, but eventually prevailed as the strongest team in the five-day event.

“[Cole Shepard] (Vancouver Giants) moved it up to the point and I just tried to get a screen,” King said while describing his overtime-winner. [Defenceman Ryan Watson] (Medicine Hat Tigers) took a shot and I tried to get a stick on it.

“I tipped it and looked and it went post and in and everyone went crazy. It was a good feeling.”

Undefeated in their last 16 games at the tournament dating back to Nov. 4, 2012, Alberta gave their neighbours to the west all they could handle in the best game of the tournament.

The first-overall pick from the 2017 WHL Bantam Draft, defenceman Kaiden Guhle (Prince Albert Raiders) opened the scoring on a shot from the left side on the power play 8:34 in after Kyle Crnkovic (Saskatoon Blades) and Ronan Seeley (Everett Silvertips) worked the puck around up top.

Meanwhile, Sebastian Cossa (Edmonton Oil Kings) made the start over Garin Bjorklund (Medicine Hat Tigers) and was sensational in the first period, stopping all 12 first period shots to keep the 2016 silver medal winners at bay.

B.C. continued to pressure in the second period though, breaking out on a two-on-one that was broken up on a beautifully-timed dive by Ronan Seeley (Everett Silvertips) to deny his opponents a quality scoring chance.

Just after Alberta came off the man-advantage, they doubled their lead thanks to Connor McClennon (Kootenay ICE). Crnkovic passed it from the slot to McClennon in front of the net, who caught Dylan Garand (Kamloops Blazers) in an awkward position, eventually forcing the puck across the goal line.

Despite giving up three goals, Garand never lost his focus, finishing with 24 saves in the biggest game of the tournament.

“We started tough, but I think we realized that you have to come together as a team to win this thing and that’s what we did,” Garand commented.

That goal seemed to spark a turning point in the game as British Columbia came roaring back. Less than three minutes later, Justin Sourdif (Vancouver Giants) put his province on the board. With fellow Giants prospect Krz Plummer in the box for interference, B.C. went to work on the power play. With a shot on net bouncing back into the slot, Sourdif was the first to get his stick calmly on the puck, firing it over a sprawled Cossa for B.C.’s first goal.

That wasn’t the end of B.C.’s scoring in the period either. With 19 seconds to go, Ethan Bowen (Kelowna Rockets) found the puck on his stick behind the net and put it out front to Tyson Phare, who quickly deposited it into the net to tie things up after 40 minutes.

That set the stage for an exciting third, which didn’t have to wait long for its first goal.

Off a face-off in Alberta’s end 20 seconds into the final period, Watson threw the puck on net from the blue line, with the puck beating Cossa high after appearing to change direction through traffic.

That put Alberta behind for the first time all tournament, a situation players like Seeley said his team was perfectly okay with in a temporary sense.

“The guys were super positive,” Seeley noted. “At first it sucked, but we just kept going.”

Chances for the host province came and went throughout the majority of the period. It wasn’t until the dying minutes of the third when Alberta equalized things. A Guhle point shot came to McClennon, who quickly adjusted and backhanded the puck over the right pad of Garand to tie up the game with 1:44 to go, sending the Alberta bench into a frenzy.

After scoring to put his team up by a goal in the early part of the third, Watson played a key role in the golden goal in overtime. Watson got the puck at the blue line and put the puck on net. As Cossa moved to the point where Watson’s shot should’ve gone, Ben King had enough time in the lane to tip the shot, changing its direction at the last moment and breaking through for the tournament-winner.

The win, while surprising, wasn’t completely unexpected. Players like Payton Mount (Seattle Thunderbirds) and Jack Finley (Spokane Chiefs) had steadily picked up their play to lead British Columbia’s squad throughout the five-day tournament. A opening-game shootout loss to Manitoba was less than favourable, but the team remained on a forward progression throughout the five days.

Still, to beat an Alberta squad that had dominated the majority of the round-robin, won by a large margin in the meeting between the two teams Thursday and had 11 first-round draft picks from the 2017 WHL Bantam Draft on their roster, is an accomplishment that will be etched in the history books of the WHL Cup for years to come.

While Alberta has nothing to be sad about, there was a clear sense that the team wanted a different colour medal, especially after the pandemonium of McClennon’s late goal to force overtime.

“I think we played our hearts out and did everything we could,” Alberta captain Jake Neighbours (Edmonton Oil Kings) said. “If you just take this, remember this feeling and hopefully it doesn’t happen to any of us ever again.

“[WHL Cup] is an amazing experience. It’s something I’ll cherish for the rest of my life and though it’s not the outcome I wanted, I’ll look back at the memories, not the results.”

For how quickly a team like British Columbia bonded, it’s unlikely that they’ll all played as a same group of 20 in another tournament ever again. Pockets of players will show up together as leaders in future years however, battling for the Ed Chynoweth Cup, playing in Mastercard Memorial Cups and one day competing to win the Stanley Cup itself.

Champions this time around, British Columbia can hold their head high with the work just starting on 20 budding hockey resumes that now include a WHL Cup title to what will soon be a lengthy list. Regardless of what they win in their lifetimes, this tournament will hold a special place in the hearts of the 20 players who can officially lay claim to B.C.’s second title at the tournament.