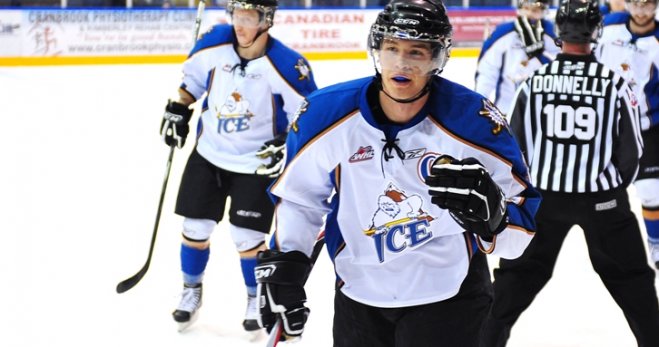 McNabb picked up six points, scoring one goal and five assists to go with a +2 rating in two games over the last week, helping the Ice to a 4-0 series win over the Saskatoon Blades to advance to the Husky WHL Eastern Conference Championship Series.

On Tuesday, April 12th, the Kootenay Ice hosted the Saskatoon Blades for game three of their second round series at the Cranbrook Rec Plex.  McNabb scored one goal, added two assists and was named the games 1st Star as the Ice downed the Blades 3-0 to take a 3-0 series lead.  The following night, Wednesday, April 13th, the Ice had the opportunity to upset the top seed in the 2011 WHL Playoffs in front of a home crowd in Cranbrook.  McNabb collected three assists as the Ice defeated the Blades 5-2 to advance to the next round.

McNabb, a 20 year old (born 1991) from Davidson, SK, is playing his fourth season with the Kootenay Ice.  The Ice made him their 2nd round (37th overall) selection at the 2006 WHL Bantam Draft and was selected in the 3rd round (66th overall) in the 2009 NHL Draft by the Buffalo Sabres.  McNabb set career highs in all offensive categories this season and finished 3rd among WHL defenceman in scoring gathering 72 points (21 goals, 51 assists) in just 59 games.  He is currently 6th among all WHL Scorers in the post-season with 15 points (3 goals, 12 assists) in 10 games.

The WHL has also nominated Nathan Lieuwen of the Kootenay Ice for the CHL Goaltender of the Week Award.  Lieuwen posted a 2-0-0-0 record this past week, stopping 55 of 57 shots faced for a 1.00 goals-against average and 0.965 save percentage.  Lieuwen, a native of Abbotsford, BC, helped the Ice emerge with a 4-0 series win over the Saskatoon Blades in the Husky WHL Eastern Conference Semi-Final.