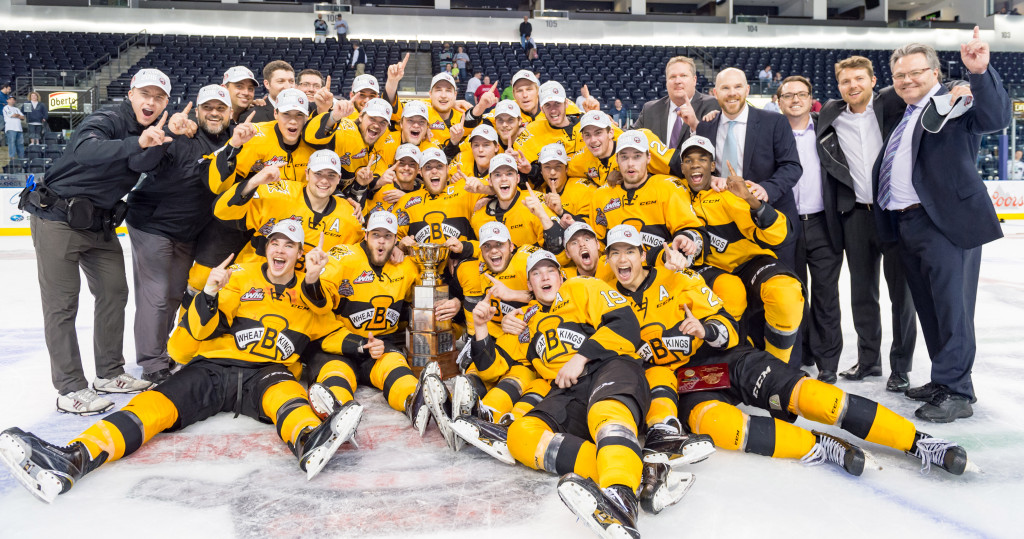 Seattle, WA – The Brandon Wheat Kings claimed the Ed Chynoweth Cup on Friday night in Kent, Washington to become the 50th WHL Champions after earning an 8-4 victory over the Seattle Thunderbirds.

The win marks the third time in franchise history that Brandon has won the Ed Chynoweth Cup (1979, 1996, 2016) in its eighth appearance. All three championship-clinching victories have come on American soil (1979 at Portland, 1996 at Spokane). The Wheat Kings were runners-up to the Kelowna Rockets one season ago, falling in four games in the 2015 WHL Championship Series.

Nolan Patrick (Winnipeg, MB) was named the 2016 WHL Playoffs Most Valuable Player following the game after leading all players in the post-season with 30 points (13g-17a) in 21 games to go along with a plus-19 rating. Patrick, a 1998-born forward eligible for the 2017 NHL Draft, recorded the game-winning goal and two assists on Friday night. Throughout the 2016 WHL Playoffs, Patrick notched four game-winners.

The Wheat Kings will begin play at the 2016 MasterCard Memorial Cup on Saturday, May 21st as they face off against the Quebec Major Junior Hockey League Champions, the Rouyn-Noranda Huskies. The host Red Deer Rebels will kick off the event one night earlier when they welcome the London Knights of the Ontario Hockey League.