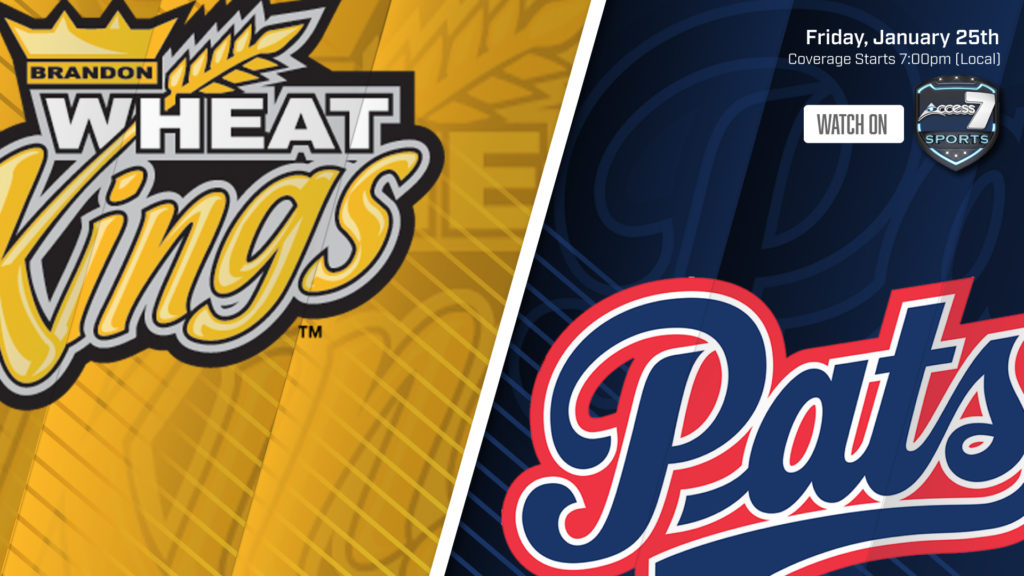 The Brandon Wheat Kings will make their first WHL on Access appearance of the season against the Regina Pats on Friday at 7:00 p.m. (CT) to kick-off a home-and-home series in the Queen City.

While both teams have stuck around East Division for the majority of the last few games, their records in their past 10 games are somewhat similar in experience, leaving both sitting on the outside of the playoff picture. With a 4-6-0-0 record in their last ten games, Brandon continues to hold steady in fourth place in the East Division with 44 points. The Regina Pats linger in fifth place with 26 points and a 0-9-1-0 record in the past ten games leading them to look for a positive change.

With 21 games left in their season, the Regina Pats may be running out of time to insert themselves in a playoff position, but a rally at home from Pats supporters, in their next four of eight games could be what the team needs to turn their luck around. Two bright spots on their roster for the game against Brandon include veteran Austin Pratt and rookie Riley Krane, who have 36 points (17G-19A) and 19 points (10G-9A) respectively as they work to aid the Pats hopeful improvement to their record in the last few months of the season.

A recent Highlight of the Night honour for Pats player Duncan Pierce, which showcased his slick hands on a penalty shot against the Saskatoon Blades also illuminated the individual talents on the Pats team that can shine from time to time. Also adding to the Pats’ roster going forward, the team will welcome back goaltender Max Paddock to the lineup after a brief injury has kept him out of action since January 5, though it hasn’t been confirmed if he’ll make the start Friday night or not.

While Brandon has held fourth place in East Division for the majority of the season, their recent track record could indicate a warmer trend, splitting their last four games 3-1-0-0. Coupled with captain Stelio Mattheos’ (Carolina Hurricanes) eighth place overall in points for the WHL with 61 points (30G-31A) and 2019 NHL Draft prospect Luka Burzan’s 17th place position with 51 points (26G-25A), the Brandon Wheat Kings could easily generate success against the Pats.

Tune in to catch all the action at the Brandt Centre live on AccessTV as the Pats defend home territory against the Wheat Kings.

The #BWK are on the road to Regina to kick-off a weekend doubleheader against the Pats tonight. Brandon returns to Westoba Place tomorrow for the final home game in January! #bdnmb

Check out the Regina Pats Game Day Magazine ahead of tonight's game against the Brandon Wheat Kings! https://t.co/tHCHupCpWU#JoinTheRegiment pic.twitter.com/FLeOO4TlAR