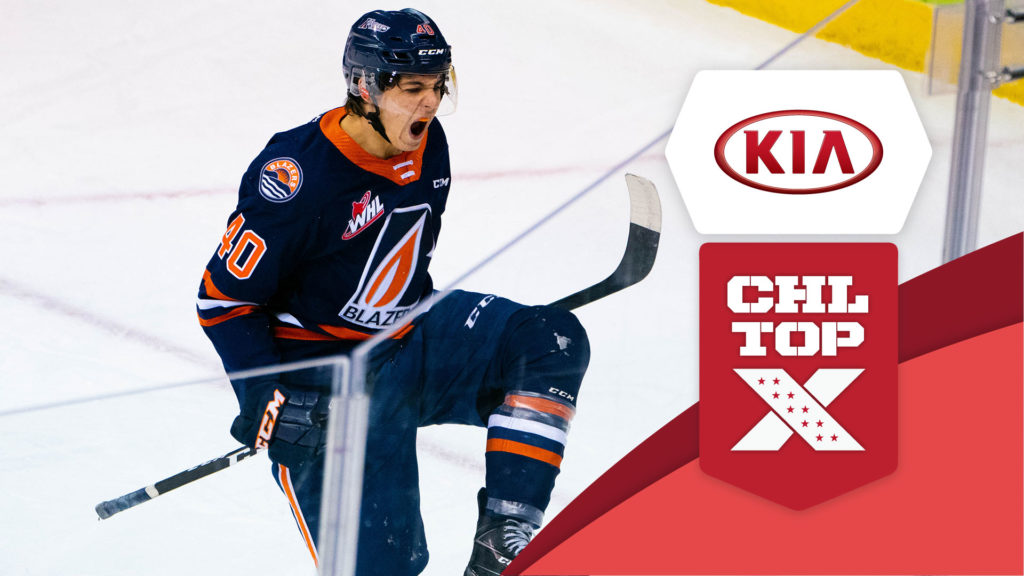 Toronto, Ont. – The Canadian Hockey League today announced the week 17 edition of the Kia CHL Top-10 Rankings for the 2019-20 season. The weekly rankings of the CHL’s Top-10 teams are selected by a panel of National Hockey League scouts. The standings are reflective of before Wednesday’s Western Hockey League action.

Holding onto the third spot for another week, the Portland Winterhawks remained the WHL’s top-ranked team in the weekly rankings. Portland extended their undefeated-in-regulation streak to 14-0-1-1 with a weekend split of a pair of overtime contests on Vancouver Island against the Victoria Royals and a 9-4 win against the Regina Pats Tuesday at home. 2020 NHL Draft prospect Seth Jarvis recorded a career-high five-point performance in Saturday’s 6-5 overtime win against the Royals, earning him WHL On the Run Player of the Week honours. On Thursday, January 16 (5:00 p.m. MT) in Hamilton, Ont., he will be one of 14 WHL players competing at the 2020 Kubota CHL/NHL Top Prospects Game.

Staying within two spots of the Winterhawks this week were the league-leading Edmonton Oil Kings, who still hold the top spot in the WHL by a single point over the Winterhawks. The Oil Kings collected five of a possible six points from a three-game road trip through Saskatchewan, beating the Moose Jaw Warriors 7-4, dropping a narrow 2-1 game in the shootout to the Saskatoon Blades, and earning a 3-2 shootout win against the Prince Albert Raiders. Rookie forward Dylan Guenther has taken over the team scoring lead in the new year with eight points (4G-4A) through his team’s previous six games. The Oil Kings will host the Raiders on Friday, January 17 (7:00 p.m. MT) at Rogers Place for the first of 17 RE/MAX Presents: WHL Suits Up to Promote Organ Donation games.

The Kamloops Blazers made the biggest jump up the rankings, charging into the seventh spot this week after previously being unranked. A five-game winning streak and 8-2-0-0 stretch in their previous 10 games was furthered by a home-and-home sweep of the Kelowna Rockets as well as a 6-3 win against the Spokane Chiefs Tuesday. Leading by example, captain Zane Franklin has produced 11 points (4G-7A) in five games during the new year to lead the Blazers. Kamloops will prepare to host the Tri-City Americans for a pair of contests beginning Friday, January 17 (7:00 p.m. PT) at the Sandman Centre.

Dropping a single spot this week were the U.S. Division’s Everett Silvertips. Dropping contests to the Seattle Thunderbirds and Pats over the weekend, the Silvertips still rank in a tie for fourth in the league for the fewest goals allowed, having conceded just 105 through their first 41 games. Their 0.688 winning percentage also ranks as the fifth-best in the entire WHL. Continuing a three-game home stand, the Silvertips will host the Kelowna Rockets on Friday, January 17 (7:35 p.m. PT) at Angel of the Winds Arena.

Earning an honourable mention this week were the Central Division’s Medicine Hat Tigers. An impressive 4-1 win over the Winnipeg ICE as well as a home-and-home sweep of the Moose Jaw Warriors established a three-game winning streak for the Tabbies, who are also 6-3-0-1 in their last 10 games. Now sitting second in the division, the Tigers have put themselves firmly among the conference’s best teams and will look for more success down the stretch. They’ll get a good test this coming weekend, playing host to the Lethbridge Hurricanes on Saturday, January 18 (7:30 p.m. MT) at the Canalta Centre before taking to the road against the Oil Kings on Sunday, January 19 (4:00 p.m. MT) at Rogers Place in the provincial capital.