Blazers send Smith south of the border to Chiefs in exchange for Faith, picks 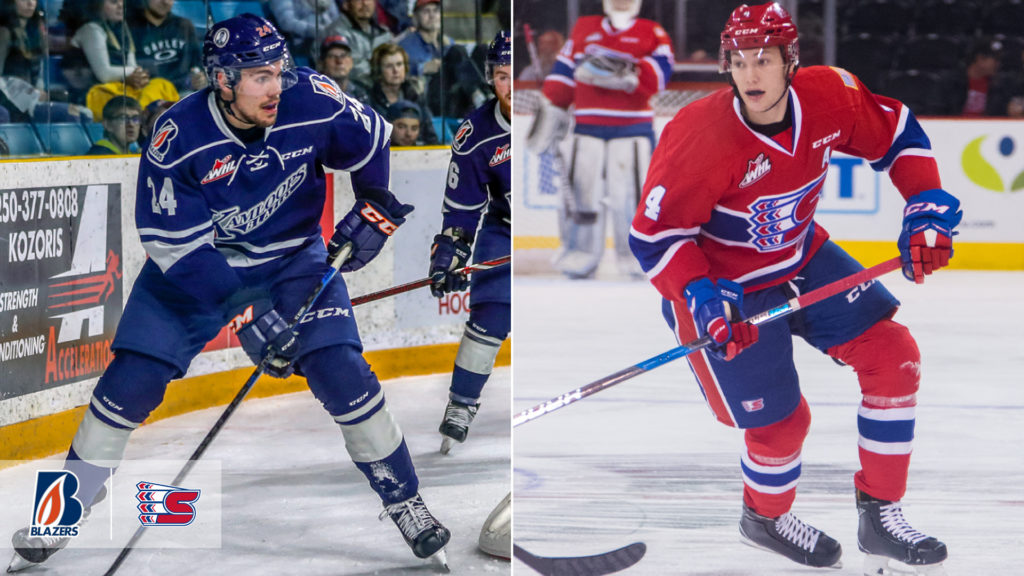 The Kamloops Blazers made their second trade of the day a big one, dealing overage forward Luc Smith to the Spokane Chiefs.

In exchange, the Blazers acquired fellow overage forward Jeff Faith as well as third and sixth round selections in the 2020 Western Hockey League Bantam Draft.

The 20-year-old Smith is a 6-foot-4, 210-pound product of Stony Plain, Alta. In 22 games this season, Smith has been one of the Blazers’ top offensive threats, recording 19 points (8G-11A), including four power-play goals. Those totals had him tied for second on the Blazers in goals and fourth in scoring.

Smith’s WHL career began when he was selected in the third round, 60th overall, by the Regina Pats in the 2013 WHL Bantam Draft. He’d go on to appear in 154 WHL regular season games for the Pats, recording 26 points (12G-14A) along the way. After a trade sent him to the Blazers midway through the 2016-17 WHL Regular Season, Smith saw his offensive production rise. In 116 WHL regular season games with the Blazers, Smith has recorded 74 points (35G-39A), including a career-high 44 points (21G-23A) last season in 62 games with Kamloops.

“We are very excited to add Luc to our roster,” said Chiefs’ general manager Scott Carter. “He has a unique combination of size, scoring ability and toughness that will help us win games.”

Smith recently recorded the 100th point of his WHL career Friday as part of a three-assist performance against the Tri-City Americans. Smith has recorded a career-high three points in a single game on four occasions.

Headed to the Blazers in return is Faith, a 20-year-old product of Wilcox, Sask. In 24 games with the Chiefs this season, Faith had a single goal, which served as the game-winning goal in a 6-3 win against the Kootenay ICE on September 29.

Faith was originally selected 16th overall, by the Chiefs in the 2013 WHL Bantam Draft. Since then, Faith has appeared in 191 WHL regular season games, posting 26 points (8G-18A), including the one game-winning goal.

“Jeff Faith will bring a strong presence along with a type of game where it is difficult to play against,” commented General Manager Matt Bardsley.

The Blazers are back in action Friday, November 30 (7:00 p.m. PT) against the Saskatoon Blades. The Chiefs will play host to the Prince George Cougars on Wednesday, November 28 (7:05 p.m. PT).