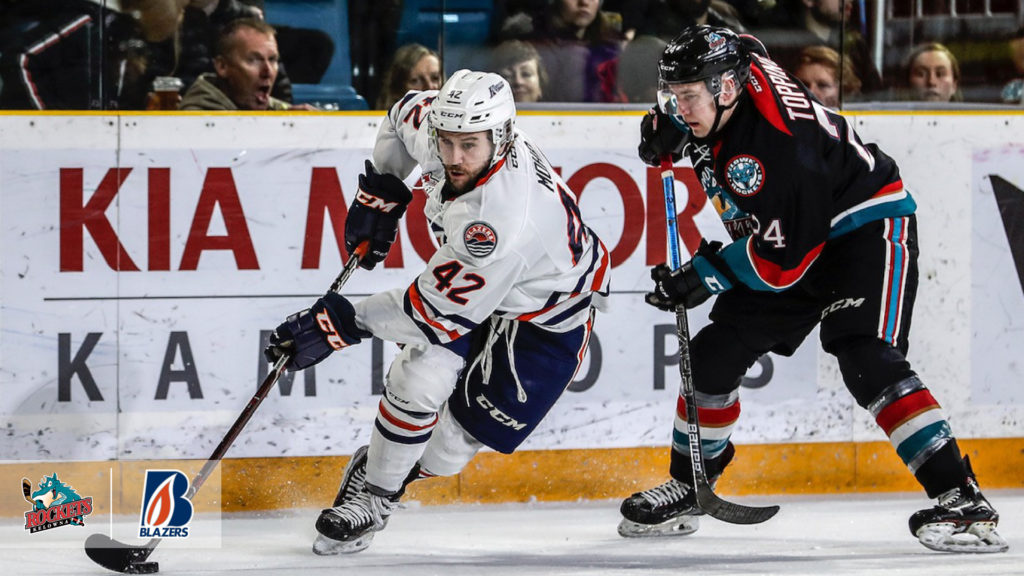 Calgary, Alta. – The Western Hockey League announced today the Kamloops Blazers and Kelowna Rockets will meet Tuesday, March 19 (7 p.m. PT) at the Sandman Centre in Kamloops for a tiebreaker game to determine the final playoff berth in the WHL’s B.C. Division and Western Conference.

The winner of Tuesday’s WHL Tiebreaker Game will advance to the 2019 WHL Playoffs and a best-of-seven, first-round series against the Victoria Royals, who finished the 2018-19 WHL Regular Season second in the B.C. Division.

WHL fans can watch the tiebreaker game for FREE on WHL Live as a special offering before the 2019 WHL Playoffs begin Friday, March 22. WHL Live Playoff Packages will be made available for purchase Monday, March 18.

The Blazers and Rockets finished the 2018-19 WHL Regular Season tied for third place in the WHL’s B.C. Division and the final playoff spot in the WHL’s Western Conference with identical records of 28-32-6-2 (64 points). The Blazers are awarded home-ice advantage in the single-game tiebreaker, having finished with more points in the regular season head-to-head series with the Rockets. In 10 meetings between the two B.C. Interior rivals, the Blazers finished 6-3-1-0 (13 points), while the Rockets finished 4-4-1-1 (10 points).

A dramatic Saturday night provided more than enough nail-biting moments for even the most battle-tested of fans as both the Blazers and Rockets scored theatrical victories to set up for Tuesday’s tiebreaker.

In Prince George, the Blazers trailed the Cougars by a 2-1 margin with just over five minutes remaining in the third period before scoring three unanswered goals to secure a 4-2 win. Captain Jermaine Loewen evened the affair with his 27th goal of the season before Connor Zary converted on a shorthanded breakaway opportunity to give Kamloops a 3-2 lead with 2:45 to go. Loewen added some insurance with an empty-netter moments later.

Meanwhile in Kelowna, the Vancouver Giants forced overtime with the Rockets after Jadon Joseph scored to make it a 2-2 game with only 33 seconds to go in regulation. With 1:20 remaining in the extra period and the Blazers having just finished off the Cougars, it was Mark Liwiski registering his 11th goal of the season to give the Rockets a season-extending 3-2 triumph.

All of this caps a quite improbable stretch, as the Blazers erased a seven-point deficit, going 5-0-1-0 to close the regular season in order to catch the Rockets and set the stage for Tuesday’s tiebreaker.

Loewen – a prospect of the NHL’s Dallas Stars – and the Blazers will welcome 2019 NHL Draft prospect Nolan Foote and the Rockets to Kamloops for the first WHL Tiebreaker Game since 2016.

In addition to Loewen, the Blazers are led by two energetic forwards enjoying career seasons – Zane Franklin and Zary. Franklin, a 20-year-old product of Marwayne, Alta., leads Kamloops in scoring with 68 points (28G-40A) in 68 games this season. Zary, a 17-year-old product of Saskatoon, Sask., sits second in scoring on the Blazers, having collected 67 points (24G-43A) in 63 games this season.

Tuesday’s tiebreaker game serves as the seventh in WHL history and the first since 2015-16 when the Edmonton Oil Kings knocked off the Medicine Hat Tigers by a 6-4 margin to advance to the 2016 WHL Playoffs.