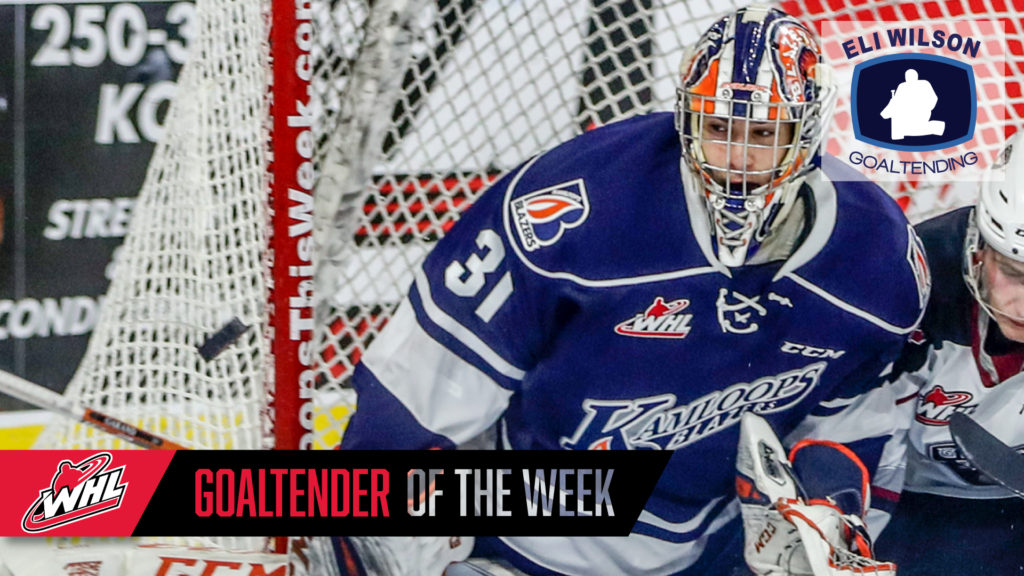 Calgary, Alta. – The Western Hockey League announced today that 2020 NHL Draft prospect Dylan Garand of the Kamloops Blazers has been named the WHL Eli Wilson Goaltending Goaltender of the Week for the week ending October 20, 2019.

Garand won both of his games this week against divisional rivals, sporting a 0.50 goals-against average, stopping 48 of 49 shots for a .980 save percentage, and recording one shutout. The performances helped vault the Blazers into first place in the B.C. Division.

Friday, Garand recorded the second shutout of his WHL career, stopping all 23 shots in a 6-0 win over the Vancouver Giants. Garand stopped five shots in the first, seven in the second, and 11 in the third. He was subsequently named the WHL’s third star of the game and third star of the night in the WHL.

He followed up Friday’s shutout with a 25-save performance against the Kelowna Rockets in a 2-1 win Saturday. Garand stopped all 15 shots through 40 minutes, then made 10 saves on 11 shots in the third period. He earned second-star honours for the game.

The 6-foot-1, 172-pound product of Victoria, B.C. has played a strong role in the Blazers’ success to date, posting a 7-3-0-0 record, 2.01 GAA, .930 SV%, and one shutout in 10 games. He leads the league with seven wins and ranks in a tie for seventh among WHL goaltenders to play more than one game this season. He ranks ninth in GAA and is one of 14 WHL goaltenders to record a shutout this season.

Garand was one of five WHL goaltenders identified by NHL Central Scouting on their ‘Players to Watch’ List earlier this month ahead of the 2020 NHL Draft.

Up next, the Blazers will return to Garand’s hometown for a pair of games against the Royals. The first meeting of the weekend takes place on Friday, October 25 (7:05 p.m. PT).