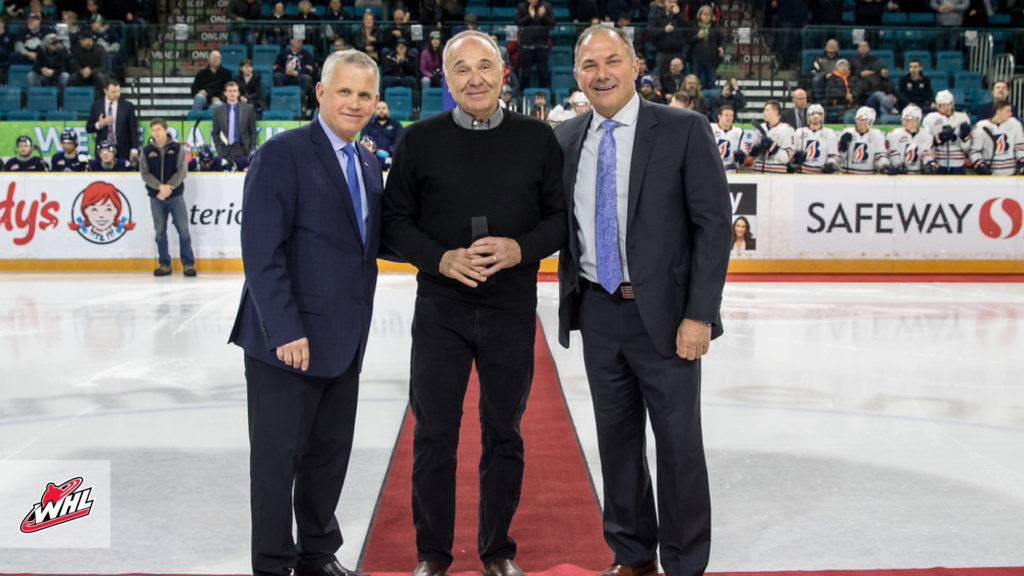 Kamloops, B.C. – Western Hockey League Commissioner Ron Robison announced today, on behalf of the WHL Board of Governors, that Dr. Bob Smillie, Executive Director of the Kamloops Blazers Sports Legacy Fund, has been named a recipient of the WHL Distinguished Service Award for the 2018-19 WHL season.

Dr. Smillie was honoured by Commissioner Robison in Kamloops during a special ceremony prior to Friday’s game between the Kamloops Blazers and Seattle Thunderbirds.

“Having served in a volunteer capacity with the Kamloops Blazers organization for over 40 years, Bob Smillie exemplifies what the WHL Distinguished Service Award is all about,” commented WHL Commissioner Ron Robison. “From his role as a longtime board member with the Blazers, to serving as the Team Doctor and Education Advisor and now in his current role as head of the Blazers Sports Legacy Fund, Bob has played an integral role in the Blazers franchise and it is only fitting he is a recipient of this prestigious award.”

“I cannot think of a more deserving recipient of the WHL Distinguished Service Award than Bob Smillie,” said Don Moores, President and Chief Operating Officer for the Kamloops Blazers. “Bob has been a tremendous ambassador of the Kamloops Blazers Hockey Club in so many different capacities over the years. He exemplifies what ‘extraordinary contributions’ are when it comes to the amount of time and effort he has spent to help better our hockey club and the WHL.”