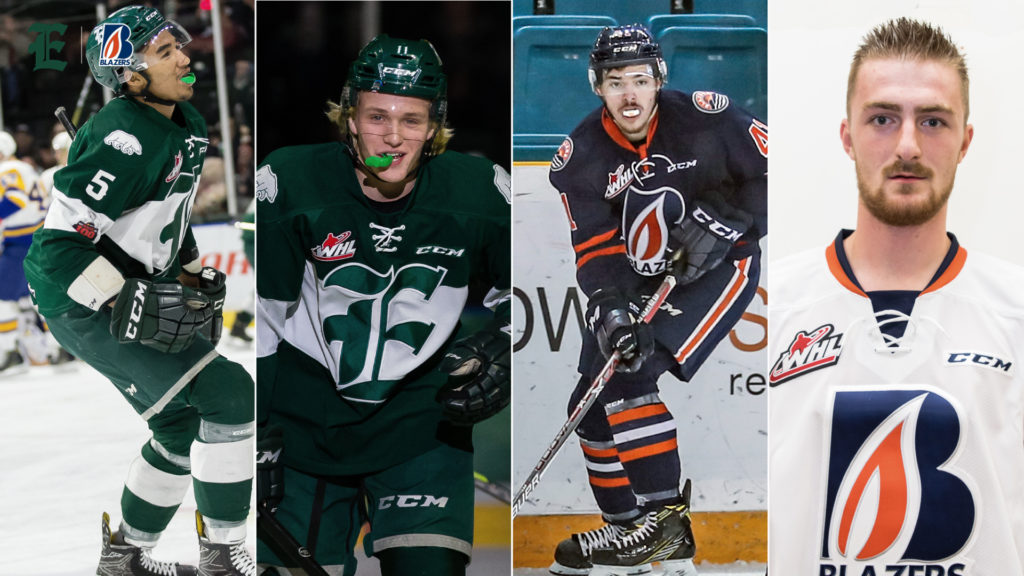 In return, the Blazers will receive forward Orrin Centazzo (2000), Montana Onyebuchi (2000) as well as prospects Kalen Ukrainetz (2002) and Nathanael Hinds (2002). The Blazers also received first and fourth round picks in the 2019 Western Hockey League Bantam Draft.

Pilon and Vala are two big gets for the Silvertips, who have been duking it out with the Portland Winterhawks and Tri-City Americans for the division lead over the course of the season.

Pilon, a 5-foot-11, 188-pound product of Saskatoon, Sask. was drafted by the Capitals in the third round, 87th overall, of the 2016 NHL Draft. In 39 games this season, Pilon has 44 points (18G-26A), including four power play goals, two short-handed goals and one game-winner. Over the course of 177 WHL games, Pilon has 156 points (53G-103A), including eight power play goals, four short-handed goals and 12 game-winners. Pilon was originally drafted by the Blazers in the seventh round,133rd overall, of the 2013 WHL Bantam Draft.

Also headed to the Silvertips is Vala, a signed prospect of the Stars. Vala, who recently represented the Czech Republic at the 2018 IIHF World Junior Championship, has 66 points (21G-45A) in 163 WHL games. In 31 games this season, the 6-foot-4, 211-pound product of Kolin, Czech Republic has 20 points (7G-13A). Vala was originally drafted by the Blazers in the first round, 11th overall, of the 2015 CHL Import Draft.

“First off, we’d like to thank Ondrej and Garrett for their contributions to our program. They are leaders on and off the ice and will always be Blazers in our eyes,” Blazers general manager Stu MacGregor said. “This was a difficult decision as we are losing two quality hockey players and people. We wish them all the best in Everett and with their professional careers moving forward.”

Everett paid a steep price to acquire the pair, but didn’t have to sacrifice any of their current core, making them legitimate contenders going forward for the rest of the season.

“Today we addressed needs on our blueline and for our scoring depth which welcome individuals to the Silvertips family who carry elite abilities and outstanding credentials,” Silvertips general manager Garry Davidson. “Ondrej has leadership experience on an international level and combines his size with a very physical approach as a left shot on the back end.

“Garrett has evolved into a dependable and versatile 200-foot forward who is a threatening offensive presence, makes plays on a consistent basis, and plays the game with energy.”

Centazzo, a 5-foot-8, 160-pound product of Marwayne, Alta. should get more opportunity to play with the Blazers as he looks to develop his WHL further in his first year of NHL Draft eligibility. Selected in the fifth round, 107th overall, by the Silvertips in the 2015 WHL Bantam Draft, Centazzo has 20 points (10G-10A) in 81 career WHL games. He also has a power play goal and two game-winners.

Onyebuchi, a 6-foot-3, 210-pound right-shot defenceman from Dugald, Man., is another younger piece the Blazers can use to build towards the future. Selected by the Silvertips in the third round, 63rd overall, of the 2015 WHL Bantam Draft, Onyebuchi has 16 points (4G-12A) in 85 career WHL games.

Both the Silvertips and Blazers are in action Sunday, January 7, hosting the Victoria Royals and Tri-City Americans respectively.