Blazers deal Kneen to Blades in swap of 19-year-olds 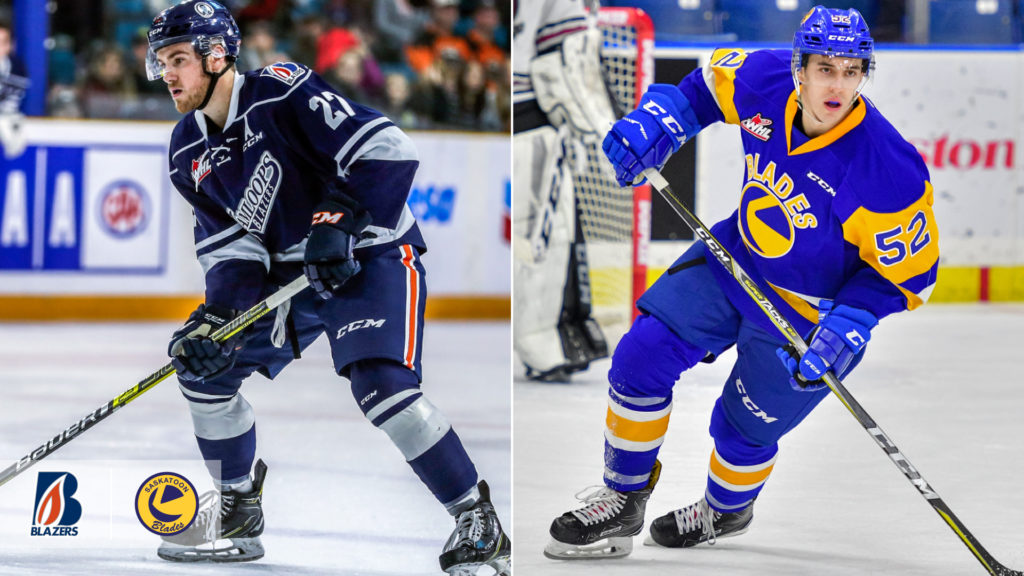 A swap of 19-year-old defencemen took place between the Kamloops Blazers and Saskatoon Blades Monday.

Heading to the Blades is Nolan Kneen while Jackson Caller was sent the other way, heading to his hometown Blazers.

In the deal, the the Blazers also received a second and third round selection in the 2020 Western Hockey League Bantam Draft. The second-round pick originally belonged to the Regina Pats while the third-round choice was originally property of the Kelowna Rockets.

“Jackson Caller is a steady two way defenceman who provided good offence last year, and with this new opportunity I believe he can achieve the same success,” commented Blazers General Manager Matt Bardsley.

Kneen was originally selected third overall by the Blazers in the 2014 WHL Bantam Draft. He scored his first career WHL goal on October 2, 2015 against the Victoria Royals. Kneen has recorded a career-high three points in a single game on two occasions. He earned one of those three-point efforts Sunday, November 18 against the Prince George Cougars. He has 14 multi-point games to his name in his WHL career.

Headed the other way in the deal is the Kamloops, B.C. product Caller. Through 20 games this season, Caller had a pair of goals. Originally selected by the Portland Winterhawks in the seventh round, 133rd overall, at the 2014 WHL Bantam Draft, the 6-foot-2, 189-pound rear guard has played in 165 WHL regular season games with the Winterhawks and Blades, posting 33 points (5G-28A).

“Nolan is a top flight, right shot defenceman who combines skill and toughness. Since last year’s (trade) deadline Nolan has been a top 10 point producer in the league among all defenceman and we feel he adds a lot to our group both this year and next,” stated Saskatoon Blades general manager Colin Priestner.