Blazers’ Centazzo named WHL On the Run Player of the Week 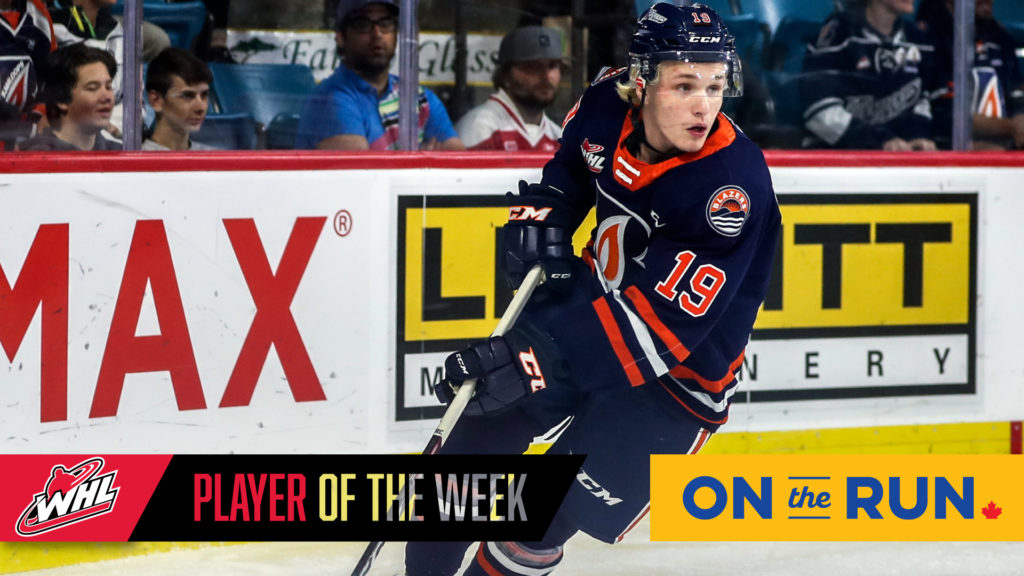 Calgary, Alta. – The Western Hockey League announced today that Kamloops Blazers forward Orrin Centazzo has been named the WHL On the Run Player of the Week for the week ending December 29, 2019.

Centazzo recorded seven points (3G-4A) in two games in a weekend split for the Blazers as WHL action resumed from the holiday break. With the victory, the Blazers still control the best record in the B.C. Division, sitting at 22-10-2-1 through 35 games.

In Friday’s 4-0 road win against the Kelowna Rockets, Centazzo factored into all four Kamloops goals, registering a goal and three assists. He scored the Blazers’ third goal of the game while drawing secondary assists on their first two goals and a primary helper on the team’s fourth goal. Centazzo’s efforts earned him first-star honours for the game.

Back on home ice Saturday, Centazzo recorded a pair of goals as part of a three-point night in a 7-5 loss to the Everett Silvertips. The 19-year-old forward scored the first and third goals for Kamloops, assisting on their fourth goal as well. He was named the third star of the game.

A 5-foot-8, 162-pound product of Marwayne, Alta., Centazzo has surged offensively this season, posting 50 points (24G-26A) in 35 games with Kamloops. Those figures include seven power-play goals, one short-handed goal, and four game-winning goals. He’s already established a new career-high total in goals and is currently one point away from matching his career-best total for last season. He currently ranks second on his team in scoring, fourth in overall WHL scoring, and third in goals among WHL skaters.

Centazzo has recorded 136 points (57G-79A) in 216 WHL regular season games, including 15 power-play goals, one short-handed goal, and 13 game-winning goals. The forward was originally selected by the Everett Silvertips in the fifth round, 107th overall, of the 2015 WHL Bantam Draft.

The Blazers are back in action on Monday, December 30 (7:00 p.m. PT) when they play host to the Victoria Royals at the Sandman Centre.