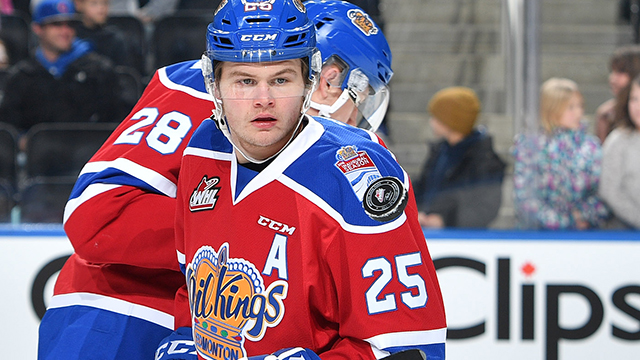 For the second day in a row, the Edmonton Oil Kings have unloaded a valuable 20-year-old.

“Lane is an impact player that will be a significant addition to our hockey club as we enter the second half of the season,” said Stu MacGregor, general manager of the Blazers, in a team release. “He is a leader, and a Memorial Cup champion with the Oil Kings in 2014.

“We believe Lane will add another offensive threat to our hockey club. He will be a great addition to our power play and will also be counted on to win faceoffs.”

Bauer, a product of Anchorage, Alaska, is enjoying an outstanding season, having collected 40 points (25G-15A) in 40 games to date. The 5-foot-11, 191-pound centre adds additional offensive flair to a Blazers lineup that already includes the likes of Collin Shirley, Rudolfs Balcers and Deven Sideroff.

The Blazers had room for an additional 20-year-old after Matt Revel was knocked out of the lineup for an estimated eight weeks with an upper-body injury. In addition to Revel and Bauer, the Blazers carry overagers Shirley and defenceman Dallas Valentine. The Blazers have until Jan. 10 to get down to three overage players.

As it stands, the Blazers sit second in the BC Division with a record of 24-15-1-1 (50 points) trailing the first place Prince George Cougars (27-10-2-0) by six points, while holding a slight cushion on the third place Kelowna Rockets (23-14-3-0, 49) and fourth place Victoria Royals ((21-15-4-0, 46). The addition of Bauer provides additional veteran leadership and offensive punch to the lineup for a team that faces an all-out war down the stretch in what could be the most competitive division in the WHL.

With 230 career WHL regular seasons under his belt, Bauer has amassed 176 points (86G-90A) after being listed by the Oil Kings in 2011. He also brings valuable playoff experience to the Blazers, having skated in 15 career post-season contests as a member of the 2014 Ed Chynoweth Cup-champion Oil Kings. Though he didn’t get into any outings, he was also with the club for its 2014 Memorial Cup championship.

“Lane represented us well and we were very pleased to have watched his growth and development as an Oil King.”

On the Oil Kings’ side of the equation, this deal marks the second consecutive haul in exchange for an expiring asset.

Wednesday, the Oil Kings shipped 20-year-old captain Aaron Irving to the Everett Silvertips in exchange for 16-year-old Brett Kemp, 20-year-old Graham Miller and a first round pick in the 2018 WHL Bantam Draft.

“This gives us the opportunity to acquire a young right-shot defenceman that’s starting to mature his game in the league,” said Randy Hansch, general manager of the Oil Kings, in a team release. “We look forward to him transitioning into our system.”

With the departure of Irving, there are plenty of minutes to be had on the Oil Kings blueline. McDonald will vie for his share of those alongside a relatively young crew that features a headful of 1998s – Kyle Yewchuk, Jordan Dawson and import Anatolii Elizarov – along with 1999s Brayden Gorda and Will Warm. The Edmonton blueline is rounded out by 2000s Wyatt McLeod and Ethan Cap.

After moving out both Bauer and Irving, the Oil Kings are now carrying only two overage players – Millar and forward Tyler Robertson – leaving room for flexibility as the WHL Trade Deadline draws near on Tuesday, Jan. 10.

“Obviously we would like to thank Lane, his parents and his aunt and uncle for being a part of our organization,” Hansch said. “Lane represented us well and we were very pleased to have watched his growth and development as an Oil King. We wish him all the best.”

Having moved two expiring assets over the past two days, the general consensus is the Oil Kings have down very well in looking to the future. In total, the Oil Kings’ return looks like this:

The fifth round pick acquired by the Oil Kings originally belonged to the Kootenay ICE.

The Blazers return to action Friday when they host the Kelowna Rockets, while the Oil Kings will visit the Lethbridge Hurricanes. McDonald is expected to make his Oil Kings debut on Friday, wearing sweater No. 37.

In a separate move, the Blazers have recalled 17-year-old defenceman Tylor Ludwar from the Regina Pat Canadians of the Saskatchewan Midget AAA Hockey League for the remainder of the season.