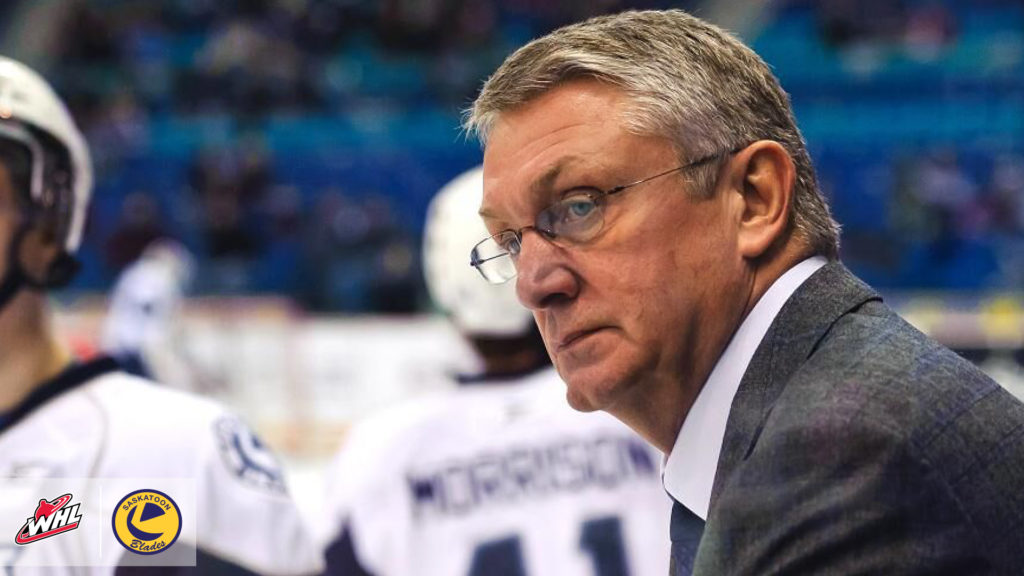 The Saskatoon Blades are proud to announce former general manager and head coach Lorne Molleken will have his name added to the Builders Banner and raised to the SaskTel Centre rafters on Saturday, March 21st ahead of puck-drop against the Prince Albert Raiders at 7:00 p.m. (CT).  Lorne will forever be immortalized in Blades lore, honouring his 13 seasons, split over three decades, behind the Blades bench.

“This is going to be a very special night for Lorne and his family as we honour a true living legend who gave so much of himself to this team and the city of Saskatoon for so many years,” said Blades general manager Colin Priestner. “I learned so much from Lorne in our time working together and consider him one of my biggest mentors. To have his name going up the rafters is going to be incredible to see, and it is so well deserved as one of the greatest coaches and managers in Blades history.”

“It is truly an honour and I’m very proud to be inducted into the Builders category,” said Molleken. “It was a privilege to be a part of the Saskatoon Blade organization for many years. The owners, the players, and staff have given me a lifetime of memories. I look forward to March 21st.”

Lorne will be on hand for a special pre-game ceremony at ice-level, and will reflect on some of the great memories and moments from his time in Saskatoon. He will be joined by his family, former staff members and players, and friends.

“Knowing Mooner, his speech is going to likely be one for the ages,” continued Priestner. “I’ve never heard someone tell stories like he can and even though half of them seem like can’t possibly be true, he swears they are. I am sure our fans are going to be howling in the aisles at some of his wildest tales are retold as only Lorne can.”

Born and raised in Regina, Sask., Lorne’s esteemed coaching career with the Blades began in the 1991-92 season. He served as head coach for four campaigns before venturing into the American Hockey League (AHL) in 1995-96, and eventually landing the head coaching role with the Chicago Blackhawks in 1999-00. Following brief stints with the Regina Pats, San Jose Sharks, and Pittsburgh Penguins in the early 2000s, Lorne returned to the Blades bench to start the 2004-05 campaign and also took over general manager duties. That was the beginning of an eight-year tenure with the team as head coach. In 2013-14, with the hiring of Dave Struch as head coach, Lorne remained as general manager for one season.

Arguably the most impressive feat achieved by Lorne came on January 26, 2011. The Blades legend became the fifth head coach in WHL history to achieve 500 career victories with a 4-3 win over the Edmonton Oil Kings.

To date, Lorne is one of the most successful coaches in junior hockey history, donning a 539-325-58 record with 23 ties over his career with the Blades.