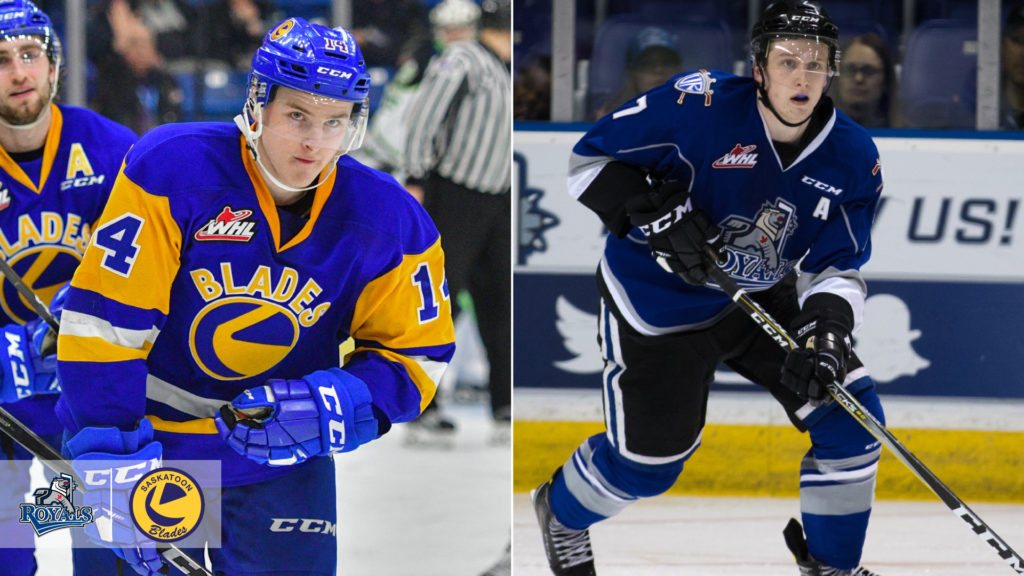 Gary Haden and Scott Walford will don different shades of blue this coming season after a massive trade Wednesday between the Saskatoon Blades and Victoria Royals.

The deal provides an immediate offensive boost to the blue line of the Blades. The need was present following the aging out of defenceman Dawson Davidson, who finished tied for the league’s defensive scoring lead last season with 75 points (13G-62A) in 68 games.

Walford, a third-round selection of the Montreal Canadiens from the 2017 NHL Draft, posted 47 points (9G-38A) in 62 games last season, including two power-play goals. He ranked behind only Vancouver Giants defenceman Bowen Byram in defensive scoring by B.C. Division players. Walford also contributed seven assists in 10 games during the 2019 WHL Playoffs.

“Deals like this are never easy to make, especially in the summer, but the chance to acquire one of the very best defenceman in the WHL was too good to pass up given we felt defence was the biggest single area we needed to address for the upcoming season,” said Blades’ General Manager Colin Priestner.

Heading to Vancouver Island, Haden is a serious add for the Royals and provided an offensive boost up front. The 5-foot-10, 176-pound product of Airdrie, Alta. had a standout offensive season, recording 65 points (31G-34A) in 64 games, including seven power-play goals, one short-handed goal, and eight game-winning goals between the Blades and Medicine Hat Tigers.

“With the strong group of defencemen coming to camp this year, it is the offensive side of our game that we felt needed addressing,” President and General Manager Cameron Hope said. “Gary will bolster our forward group. He is a dynamic forward who will certainly add a dimension to a well-rounded group.”

An early-season trade brought Haden to the Blades after he recorded three points (1G-2A) in nine games with Medicine Hat. In 55 games with the Blades, he proceeded to post 62 points (30G-32A), helping the Blades secure the second-best record in the WHL’s Eastern Conference. He added a pair of assists in 10 games during the 2019 WHL Playoffs.

Haden’s season included a pair of four-goal games, one on December 11, 2018 against the Edmonton Oil Kings and another on January 25, 2019 against the the Swift Current Broncos.

Also headed to the Royals in the deal is Gannon, a 16-year-old from Nanaimo, B.C. Playing for the Nanaimo Buccaneers of the Vancouver Island Junior Hockey League last season, he recorded 50 points (21G-29A) in 46 games, adding three points (2G-1A) in seven playoff games. He was named the VIJHL’s Rookie of the Year in 2018-19. He also appeared in a pair of games for the Alberni Valley Bulldogs of the British Columbia Hockey League.