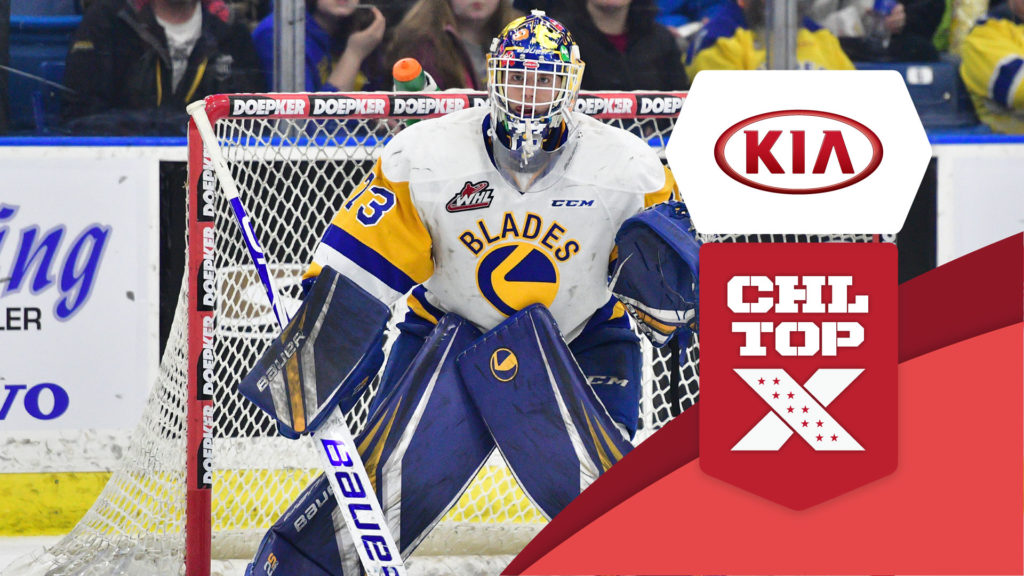 Toronto, Ont. – The Canadian Hockey League today announced the pre-season edition of the CHL Top-10 Rankings for the 2019-20 season. The weekly rankings of the CHL’s Top-10 teams are selected by a panel of National Hockey League scouts.

With promising talent on their roster, the Saskatoon Blades earned the third spot in the pre-season rankings. The Blades posted a 4-0-1-0 record in five pre-season contests leading the East Division and sat fifth overall in the 2019 Western Hockey League Pre-season with nine points. While Kirby Dach, the third-overall selection from the 2019 NHL Draft by the Chicago Blackhawks, was not in attendance, he will look to guide the Blades offensively if he returns. Younger players on the roster including 2020 NHL Draft prospect Kyle Crnkovic and rookie Colton Dach, who showed promise during the pre-season in terms of offensive production, generating nine points (3G-6A) and six points (4G-2A), respectively. The Blades begin their season on the road, visiting their division rivals, the Prince Albert Raiders, on Friday, September 20 (7:00 p.m. MT) at the Art Hauser Centre.

The Kamloops Blazers were the next WHL team featured in the Kia CHL Top 10 this week, earning spot number five on the list. The Blazers led the way in pre-season scoring and standings with seven straight wins. Rookie and 2021 NHL Draft prospect Logan Stankoven totaled 15 points (8G-7A) with Zane Franklin and Orrin Centazzo following in the second and third place, respectively. The Blazers will open their 2019-20 WHL Regular Season at home when they host the Spokane Chiefs on Friday, September 20 (7:00 p.m. PT) at the Sandman Centre.

Occupying the eighth spot on the list were the Edmonton Oil Kings. Much like the Blazers, the Oil Kings also achieved a perfect record, going 5-0-0-0 in the pre-season. With young stars, in 2020 NHL Draft prospect Jake Neighbours and Dylan Guenther, the first overall selection from the 2018 WHL Bantam Draft, the Oil Kings could be a top contender in the tough Central Division. On defence, New York Rangers prospect Matthew Robertson will also look to guide the team and improve on his 33-point (7G-26A) performance from last year. The Oil Kings’ opening game of the season will see them play the role of visitor against the Red Deer Rebels on Friday, September 20 (7:00 p.m. MT) at the Westerner Park Centrium in Red Deer, Alta.

The Vancouver Giants were placed 10th on the CHL’s Top-10 Rankings. Bowen Byram, the fourth-overall selection at the 2019 NHL Draft by the Colorado Avalanche, could return to lead the Giants. In net, the combination of Arizona Coyotes prospect David Tendeck and Avalanche prospect Trent Miner, the back half of the Giants looks strong. Justin Sourdif, a highly-ranked 2020 NHL Draft prospect, will also look to step up his performance next season for the Giants and take on more responsibility as an offensive leader. Hitting the road to start their season, the Giants will face off against the Prince George Cougars (7:00 p.m. PT) at the CN Centre in Prince George, B.C.

Earning an honourable mention this week was the Calgary Hitmen. Although they went 2-2-0-0 in the pre-season play, expect the Hitmen to bring a strong performance to every game this season with their carefully-crafted roster. Building around captain and Ottawa Senators prospect Mark Kastelic for his 20-year-old season, the Hitmen have a talented group of forwards to lead them to the top. Combine that with the addition of Vancouver Canucks prospect Jett Woo, Philadelphia Flyers prospect Egor Zamula, and overage stalwart Dakota Krebs and Calgary looks ready to contend this season. Breakout star Jack McNaughton will also play a key role in Calgary’s success between the pipes. The Hitmen will open their season against the Swift Current Broncos, on Saturday, September 21 (7:30 p.m. MT) in Swift Current, Sask.

About the Western Hockey League
Regarded as the world’s finest development league for junior hockey players, the Western Hockey League (WHL) head office is based in Calgary, Alberta.  The WHL consists of 22 member Clubs with 17 located in Western Canada and five in the U.S. Pacific Northwest.  A member of the Canadian Hockey League, the WHL has been a leading supplier of talent for the National Hockey League for over 50 years.  The WHL is also the leading provider of hockey scholarships with over 350 graduates each year receiving WHL Scholarships to pursue a post-secondary education of their choice.  Each season, WHL players also form the nucleus of Canada’s National Junior Hockey Team.