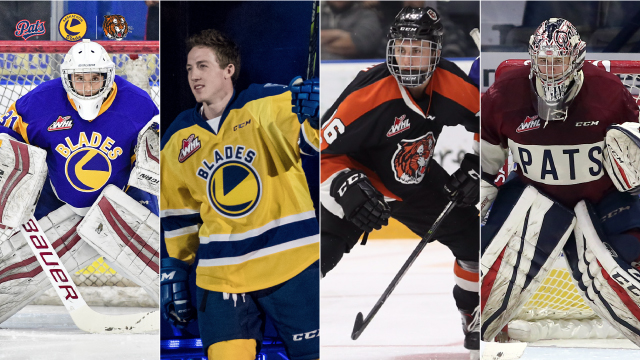 Go big or go home, that’s what they say.

And that’s exactly what the Saskatoon Blades and Regina Pats did to kick start Wednesday morning of the 2018 WHL Trade Deadline, striking a three-way deal involving the Medicine Hat Tigers.

Headed to the Queen City to join the Pats for their Mastercard Memorial Cup run is overage forward Cameron Hebig and 1998-born goaltender Ryan Kubic, both courtesy the Blades.

Rounding out this relatively complex transaction, the Tigers receive 2000-born forward Bryan Lockner from the Regina Pats and two draft picks from the Blades – a first-round pick in 2020 and a second-round pick in 2021.

For the Mastercard Memorial Cup-host Pats, they add a bona fide top-line scorer in the form of the recently-signed Edmonton Oilers prospect Hebig, along with a veteran netminder in Ryan Kubic, who stands likely to be in the fold for his overage season in 2018-19.

“Cameron is one of the best overage players in the league this year,” said John Paddock, general manager and head coach of the Pats, in a team release. “We are really excited to add his scoring and playmaking ability to our team.”

“Kubic brings three years of experience to our team,” Paddock said. “We believe he can give us the goaltending we need down the stretch.”

“Cameron was a fantastic player for us since he was 16 and it is tough to move a player of his quality,” said Colin Priestner, general manager of the Blades, in a team release. “But we feel this deal gives us pivotal assets for the future with another projected lottery pick from a rival team, and we knew with some of the assets recovered in this deal [with Regina] we could go out and get a player of Max Gerlach’s ability.

“Max is a pure sniper who sees the game at a high level and is one of the top goal-scoring wingers in the WHL over the last three years. He will be a major two-year player for us and gives us the scoring threat we were looking for for our young franchise centremen. Players like [Gerlach] do not come available very often and the fact he can play for this year and next year as an overage made this decision easy for us.”

Originally selected by the Tigers in the sixth round (120th) of the 2013 WHL Bantam Draft, Gerlach has 142 points (80G-62A) to his name through 179 career WHL regular season contests.

While Gerlach departs Medicine Hat, the Tigers recoup a young forward with great potential in the form of Lockner.

“We would like to thank Max for all his hard work in his three seasons with the Tigers,” said Shaun Clouson, general manager and head coach of the Tigers, in a team release. “We wish him all the luck in Saskatoon.

“We’d also like to welcome Bryan to the Tigers family.”

The 6-foot-1, 209-pound product of Windsor, Col., is in his second WHL campaign after playing an energy role in the Pats bottom six during a playoff run that saw Regina fall in six games to the Seattle Thunderbirds during the 2017 WHL Championship Series.

“Lockner is a really good young player,” Paddock said. “He is going to be an impact guy in our league in the next three years, but to get good players you have to give up good players.”

In addition to moving Lockner out, the Pats also send the 20-year-old Brown to the Bridge City to complete a wild start to the 2018 WHL Trade Deadline.

“It’s really hard saying goodbye to Tyler [Brown],” Paddock said. “He has been a mainstay on our team for the last three years and we wish him all the best for the rest of the season and going forward in life and his career.”

“Tyler has 35 games of playoff experience as a starter,” Priestner said. “He will make an excellent tandem with our young goaltender [Nolan Maier].”

That playoff experience could very well go a long way for a hot Blades squad that is 8-2-0-0 in its previous 10 outings and sitting in the first wildcard position in the Eastern Conference with 45 points to their credit.

Meanwhile, the Pats are looking to keep within the playoff picture as well. As it stands, Regina has gone 5-4-1-0 in their previous 10 contests and own 45 points to sit just behind the Blades in the second wildcard position in the Eastern Conference.

The Medicine Hat Tigers remain comfortably out front in the WHL’s Central Division with an eight-point lead on both the Lethbridge Hurricanes and Kootenay ICE.

The Blades host the Tigers Wednesday night (7:05 p.m. ST) while the Pats welcome the Edmonton Oil Kings on Wednesday as well.

The WHL Trade Deadline is set for 3 p.m. MT on Wednesday afternoon.