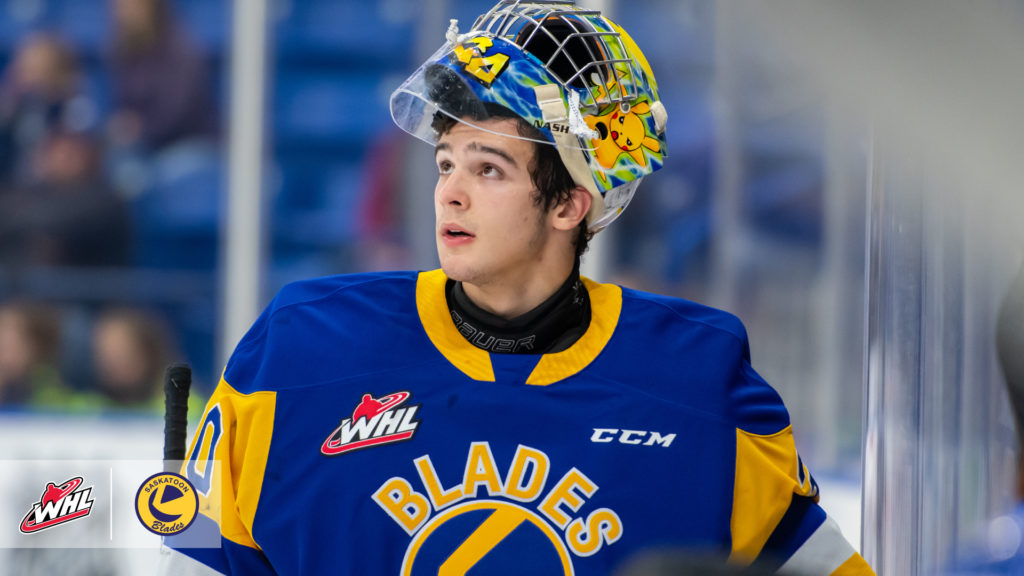 He’s calm and collected on the outside. Unfazed to anyone looking from outside the crease.

In reality, Koen MacInnes pushed himself to the absolute brink physically as a rookie goaltender for the Saskatoon Blades last season, and it helped him become one of the WHL’s top rising netminders.

“When I first heard I was going to get in a stint of nine-straight games, I was filled with excitement and joy for the opportunity,” said the 18-year-old. “However once I got into it I started to realize how physically taxing it is to play that much hockey in such a short period of time.”

This stretch lasted from January 8th-28th, with veteran workhorse Nolan Maier nursing a lower-body injury. That’s nine games over 20 days — a heavy workload for even the most experienced WHL goaltenders, let alone a freshman to the league.

But rather than capsizing under pressure, the Burnaby, BC product used the opportunity to his benefit and learned the ropes of what becoming a starter truly demands.

“I think that stint helped me understand what it takes to be a starter,” said MacInnes. “It was the most physically challenging stretch I have ever experienced. Looking back I realize how blessed I am to have gotten a chance to play that stretch of hockey because I now better understand how to conserve energy and repair my body.”

MacInnes says he worked closely with Brenden Hope, the Blades athletic therapist, every day to ensure he was recovering the best way possible. This included frequent leg massages and ice-baths, on top of added stretching at home well after practices and games.

Digging into specifics, MacInnes looks back on a stint of five starts in seven days, which demanded more mental and physical energy he’s ever experienced. It was a true test of his will-power, grit, and ability to cope under extreme circumstances.

“It ended with a home game against Victoria, where I honestly thought I was coming to my breaking point physically,” he continued. “But I knew more was needed and I was able to push through and break so many personal barriers.”

This was a monumental growth period for MacInnes. The team went 6-2-1-0 through that stretch, putting them comfortably inside a playoff spot.

Although he’s learned plenty ‘tricks of the trade’ from Maier, he credits that stretch through January for helping him become one of the most trusted back-up netminders in the league.

“I learned so much from that stretch that I can use in the future,” added MacInnes. “I became way more confident with my playing style and felt more relaxed in net. I think that stint is where I really started to play my game and settle into what it takes to be a WHL goaltender.”

The 2nd-round draft pick from 2017 signed off one a well-decorated rookie season with a 14-5-1-0 record – one of the best winning percentages among WHL rookie goalies. His .901 save percentage and 2.84 goals-against-average was complimented with three shutouts.

“Getting drafted into the NHL is something I’ve been dreaming of my whole life,” he continued. “I’ve been working towards it since I stepped on the ice as a kid. It would feel amazing knowing my efforts have been recognized.”

His end-of-season rank is also a major bump from mid-season, prior to his stint of nine-straight starts. The 6-foot-3, 183-pound ‘tender shot up nine spots — a substantial climb for a goaltender in North America.

Eying up this hot cup of Koko ☕

Becoming a starter for the Saskatoon Blades likely won’t come for another year or two, barring any unforeseen circumstances. Maier is expected to return this fall for his fourth season in blue and gold as a 19-year-old.

But regardless of how much playing time MacInnes gets, he’s certainly proven his worth in the WHL, on top of the pro attention he’s received. If/when he gets called into action, whether it’s backing up Maier in pre-season play, or as a fresh draft pick at an NHL rookie camp, he’ll be ready.

“I feel like I learned and developed a lot throughout the year, and became more of a complete goaltender,” MacInnes said. “I showed my best in the second half of the season, and overall I think I had a good year, but I’m looking forward to improving next season.”