Blades’ Dach named WHL On the Run Player of the Week

whl player of the week 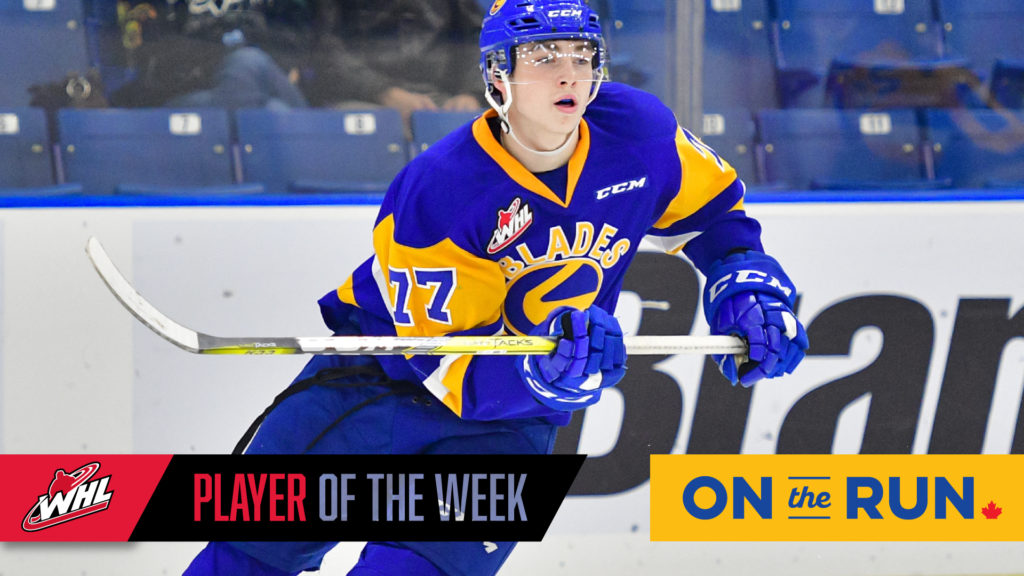 Calgary, Alta. – The Western Hockey League announced today that Saskatoon Blades forward Kirby Dach has been named the WHL On the Run Player of the Week for the week ending September 23, 2018.

Dach, a top-ranked prospect for the 2019 NHL Draft, recorded seven points (3G-4A) in two games as the Blades began the 2018-19 WHL Regular Season with a pair of wins over the Swift Current Broncos.

Friday, Dach recorded a pair of assists in a 2-1 win for the Blades on the road against the Broncos. Dach picked up a primary assist on Saskatoon’s first goal, then added a secondary assist on his team’s game-winning goal.

The 6-foot-4, 195-pound product of Fort Saskatchewan, Alta. saved his best performance of the weekend for the Blades’ home-opening contest Saturday, recording his first career WHL hat trick and five points in an 8-0 rout of the visiting Broncos.

Dach scored Saskatoon’s first, fifth, and seventh goals in the contest. He also collected a primary assist on Saskatoon’s fourth goal and a secondary assist on the Blades’ second goal. For his efforts, Dach was named the First Star of the game at the SaskTel Centre and First Star of the night across the WHL. The single-game performance was a personal best for the forward, topping a pair of four-point efforts from his rookie season.

Selected second overall by the Blades in the 2016 WHL Bantam Draft, Dach has continually impressed on the ice since making his WHL debut in November 2016. In 73 career WHL regular season games, Dach has recorded 63 points (16G-47A), including five power-play goals and three game-winning goals.

After starting 2-0 for the first time since the 2011-12 WHL Regular Season, the Blades will look to continue their strong early play when they play host to the Medicine Hat Tigers on Saturday, September 29 (7:00 p.m. MT).