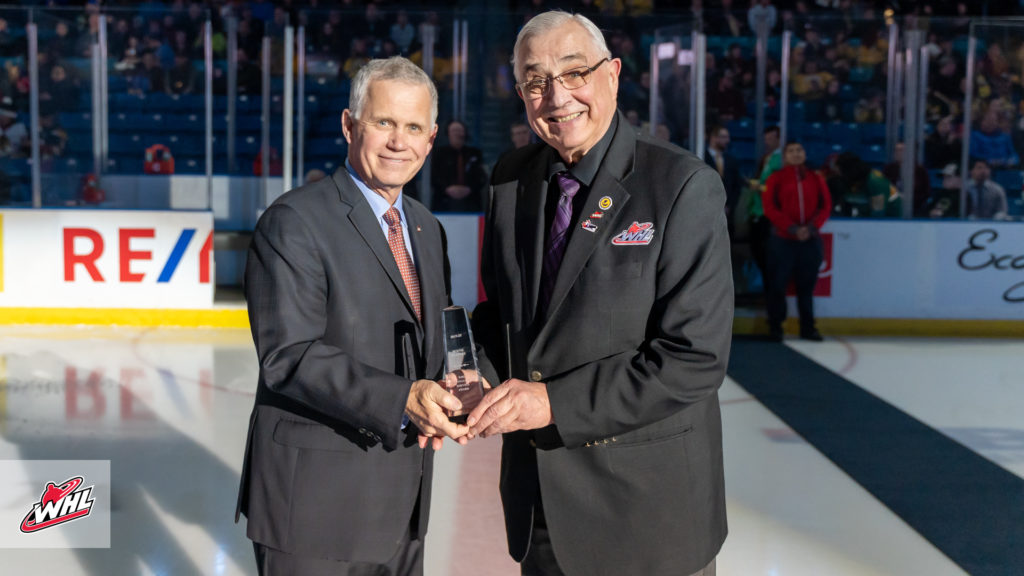 Saskatoon, Sask. – Western Hockey League Commissioner Ron Robison announced today, on behalf of the WHL Board of Governors, that Bernie Burtney, the off-ice officials supervisor for the Saskatoon Blades, has been named a recipient of the WHL Distinguished Service Award for the 2019-20 WHL season.

Burtney was honoured by WHL Commissioner Ron Robison in Saskatoon during a special ceremony prior to Friday’s game between the Blades and Regina Pats.

“Off-ice officials play an integral role in the staging of WHL games and it is the leadership from individuals like Bernie Burtney that make it all happen,” commented WHL Commissioner Ron Robison. “All of us at the WHL would like to thank Bernie for the extraordinary contributions he has made to the Saskatoon Blades organization in his role as an off-ice official over the past 30 seasons.”

Dating back to the 1990s, Burtney has become a key figure in the team’s off-ice game operations for the past 30 seasons. Responsible for the scheduling, interviewing, hiring, and management of all off-ice officials at Blades home games, Burtney has conducted himself in a professional manner, going above and beyond the normal requirements for the voluntary role. His commitment to the role remains steadfast in his third decade, rarely missing a game as well as showing up to the rink well in advance to prepare.

“Bernie has always taken his role very seriously,” said Jerome Engele, Assistant Coach and builder for the Blades. “Over the years, he’s adapted to all the changes, done various different jobs, and always strives for perfection.

“He’s well respected by his peers and is dedicated to our organization. He’s very astute when it comes to stat tracking.”

Burtney has consistently provided a welcoming atmosphere for off-ice officials, making sure all are briefed and ready to perform their duties upon arrival. Even through undergoing knee surgery and suffering personal losses in his family, Burtney has made the role a priority.