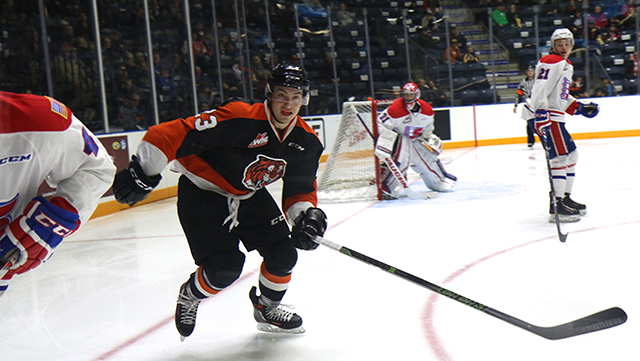 The Saskatoon Blades added some depth to their forward group Thursday afternoon, acquiring 18-year-old forward Caleb Fantillo from the Medicine Hat Tigers in exchange for a sixth round pick in the 2019 WHL Bantam Draft.

“We’ve been looking to add to our 1998 group and we’re excited to add Caleb,” said Colin Priestner, general manager of the Blades, in a team release. “He brings grit and intensity to our lineup and we feel there is some untapped offensive upside to his game based on his history of scoring prior to the WHL.”

Since then 5-foot-10, 165-pound product of Coquitlam, B.C., has skated in 70 WHL regular season contests, accumulating six goals and 15 points.

“We would like to thank Caleb for his contributions to the Tigers on and off the ice,” said Shaun Clouston, head coach and general manager of the Tigers, in a team release. “We wish himm the bests with his new team in Saskatoon.”

In five games this season, Fantillo has tallied two assists and 12 penalty minutes. He is expected to join the Blades on their B.C. Division road trip.

Saskatoon heads to Kelowna to take on the Rockets Friday night before continuing on to Victoria for a date with the Royals on Oct. 18. The Blades visit Vancouver, Kamloops and Prince George before returning home to host the Spokane Chiefs on Oct. 26.

I'd like to thank @tigershockey for everything they've done for me in the past couple years. To my billets , teammates and coaches thank you

Really excited to be joining @BladesHockey ! Can't wait to get things going and see what the future holds!