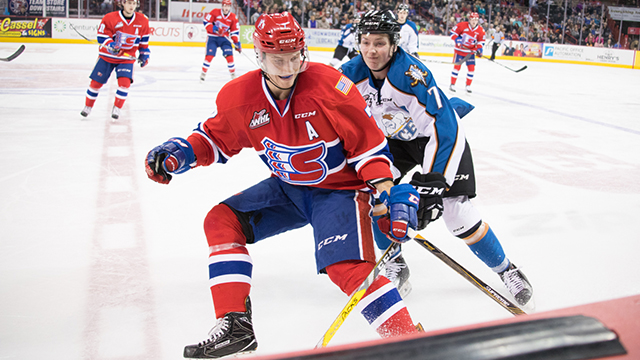 The Saskatoon Blades and Spokane Chiefs came together for a sizeable deal involving a handful of veteran players late Wednesday evening.

Taking their talents south of the border are 19-year-old forward Wyatt Sloboshan and 18-year-old defenceman Nolan Reid, along with a third round pick in the 2017 WHL Bantam Draft.

“This is a significant move for our hockey club,” said Colin Priestner, general manager of the Blades, in a team release. “In order to achieve our goals, we felt we needed a top-end centre who can play against other teams’ best players, and a big, physical defenceman. That’s what we got, and both of these players provide playoff experience and leadership to our group.”

Sloboshan was serving as the Blades captain this season, spending his entire WHL career in the Bridge City since breaking in at the start of the 2014-15 campaign.

Reid was also a career Blade, breaking into the WHL the same year that Sloboshan did.

“With this trade, we hope to fill a few areas that we need to improve in to give us a playoff push,” said Scott Carter, general manager of the Chiefs, in a team release. “Those include more back-end mobility, penalty killing and offensive production on the left wing.

“Getting a third round pick was also key for us as our third had previously been traded away. I felt it was important to get out scouts that pick for this year’s draft.”

“Sloboshan is a good, two-way forward we feel will not only contribute on offense from the left side, but will also help improve our penalty kill,” Carter said. “Wyatt was [Saskatoon’s] team captain and we feel he will bring some leadership to our group.

“Reid is a mobile, skilled defenceman who we feel will help our defensive zone transition and supplement our power play from the back end. He will complement our current group of defencemen with his skill set.”

Leaving Spokane is Bechtold, a 6-foot-1, 190-pound product of Strathmore, Alta., with 211 games of WHL experience, including 93 points (35G-58A). Joining him on the road to Saskatoon is Fiala, a hulking 6-foot-4, 205-pound product of Clavet, Sask., located approximately 30km southeast of the Bridge City.

“Markson is a mature player we’ve coveted for a long time,” Priestner said. “He’s a strong, two-way centre and we feel he’ll be able to help us in all situations whether that’s even strength, killing penalties or the power play.

“Evan brings exceptional leadership skills and he’s a top-end defender who plays night in, night out against the oppositions best players. He plays a tough brand of hockey and he’s definitely going to help us going into the back half of the season, which is always the hardest stretch.”

Like Sloboshan and Reid were to the Blades, Bechtold and Fiala were lifelong Chiefs prior to Wednesday’s transaction.

“Wyatt and Nolan were great ambassadors for the Blades and it’s tough to send out quality kids like them, but at the end of the day, we feel this improves our club,” Priestner said. “We are thankful for their contributions over the past 2.5 years and wish them all the best moving forward.”

“We appreciate the hard work and commitment both Markson and Evan have given to our organization,” Carter said. “The cost to do this trade was high and Saskatoon is getting two quality players that will help them make a playoff push also. We’d like to thank them for their time here and wish them nothing but the best with the Blades.”

The acquisition of Bechtold bumped the Blades past the overage limit of three players, meaning one 20-year-old veteran could be left out in the cold.

Kolten Olynek, picked up by the Blades off waivers from the Prince Albert Raiders earlier this season, was waived as a result of the transaction.

With the addition of Bechtold and subtraction of Olynek, the Blades have three overage players, including centre Jesse Shynkaruk and defenceman Bryton Sayers.

Fiala and Bechtold are expected to join the Blades in time for Friday’s road contest at Westman Place against the Brandon Wheat Kings, before debuting at home against the Wheat Kings on Saturday evening.

Sloboshan and Reid are expected to join the Chiefs in time for Saturday’s home date with the Prince George Cougars.