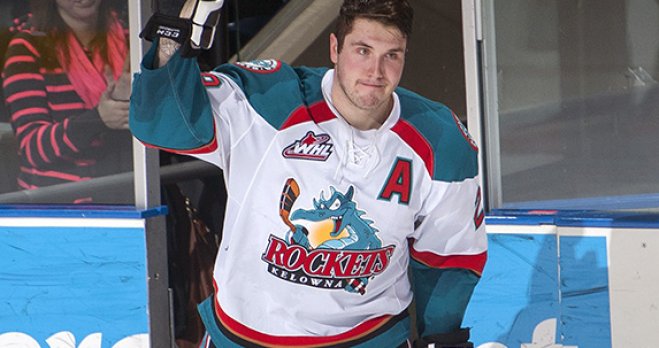 Bell scored six goals and three assists for nine points along with a +2 rating in three games over the past week, leading the Rockets to a 2-0-0-1 record in that span.

On Friday, January 31st, Bell scored twice and added an assist for a three-point effort in a 4-2 victory over the Blazers in Kamloops, B.C.  On Saturday, February 1st, Bell scored four goals, including the game winner, and added two assists for a career-best six-point outing while earning 1st Star honors in a 7-3 victory over the visiting Blazers.  He was held pointless in a 6-5 shootout loss to the visiting Spokane Chiefs on Wednesday, January 29th.

Bell, a 20-year-old product of Calgary, AB, is in his fifth season in the WHL and third campaign with the Rockets.  He currently leads the Rockets with 35 goals and 61 points in 50 games while helping the Club to first place in the overall WHL standings.  Drafted in the first round, 17th overall, by the Regina Pats in the 2008 WHL Bantam Draft, Bell has amassed 106 goals and 259 points in 308 career WHL contests.  Bell was selected by the New Jersey Devils in the sixth round, 160th overall, in the 2012 NHL Draft.

The WHL has also nominated Brendan Burke of the Portland Winterhawks for the Vaughn CHL Goaltender of the Week award.  An 18-year-old from Scottsdale, AZ, Burke posted back-to-back shutouts in two starts over the past week, stopping all 48 shots he faced in that span while helping the Winterhawks extend their winning streak to 10 games.  On Friday, January 31st, Burke stopped 32 shots and was named the game’s 1st Star in a 6-0 win over the visiting Spokane Chiefs.  On Saturday, Burke stopped 16 shots for his second consecutive shutout while earning 3rd Star honors in a 3-0 win over the Seattle Thunderbirds.  Burke is in his third WHL campaign with the Winterhawks, posting a 29-10-2-2 record with three shutouts in 43 appearances.  Selected by Portland in the 3rd round, 49th overall, in the 2010 WHL Bantam Draft, Burke has appeared in 94 career regular-season games for the Winterhawks.  He was chosen in the 6th round, 163rd overall, by the Phoenix Coyotes in the 2013 NHL Draft.