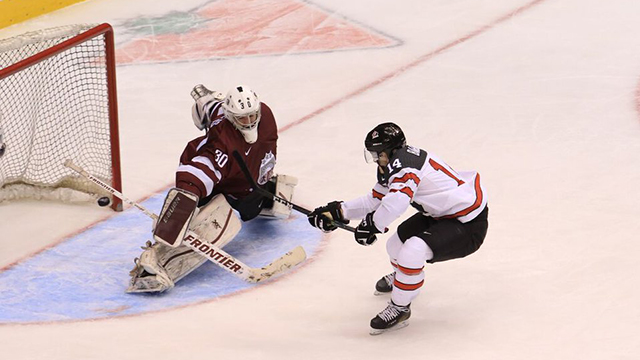 Mathew Barzal and Carter Hart were once again key contributors, with Kale Clague helping out as Team Canada secured a berth into the quarter-finals with a resounding 10-2 victory over Latvia at the 2017 IIHF World Junior Championship on Thursday at the Air Canada Centre in Toronto.

While Hart turned aside 23 of the 25 shots he faced, Barzal contributed two goals and Clague notched three assists.

Barzal, the Seattle Thunderbirds star and product of Coquitlam, B.C., opened the scoring with a short-handed effort for Canada midway through the first period after Hart, the Everett Silvertips guardian and product of Sherwood Park, Alta., weathered early pressure and power-play opportunities for the Latvians.

Stepping out of the penalty box, the 19-year-old Barzal picked up a loose puck in neutral ice before blazing in and executing a nifty move, going to the backhand to beat Mareks Mitens for a 1-0 Canada lead. Only 1:16 elapsed before Nicolas Roy extended the advantage for Canada, redirecting a Philippe Myers point shot to make it a 2-0 game.

In the dying moments of the opening period, Taylor Raddysh made it a 3-0 game by putting a power-play goal past Mitens with only 20 seconds remaining before the first intermission.

Hart, the defending CHL Goaltender of the Year, was busy early, turning aside 10 shots during the opening 20 minutes of play.

Midway through the second period, Raddysh registered his second goal of the evening, putting a ricocheted pass through the five-hole of Mitens to give Canada a 4-0 lead. Raddysh completed the hat trick later in the second period, skating free towards the top of the crease before redirecting a Kale Clague point shot past goaltender Gustavs Grigals, who had come on in relief of Mitens.

That play sparked rapid-fire scoring for Canada, as the hosts tickled twine four times in the course of 2:42.

Barzal netted his second of the night 40 seconds after Raddysh’s hat-trick tally and Canada claimed a 6-0 lead. From the left face-off circle, Barzal took a pass from Raddysh and wired a quick wrist shot off the post and past Grigals with 7:07 to go in the middle period.

Canada didn’t let up as Anthony Cirelli piled on to make it 7-0. Cirelli’s goal came 37 seconds after Barzal had made it a 6-0 game. Life didn’t get any easier for Grigals as Michael McLeod deposited a rebound past the Latvian goaltender to make it 8-0 with 5:04 to go in the second period.

With Canada enjoying another power-play opportunity, it was Latvia finally finding a way to solve Hart.

A partial 2-on-0 break for the Latvians saw Renars Krastenbergs burst down the left wing before snapping a quick wrist shot past the glove of Hart to get his club on the board with 2:02 to go in the second period.

It's all about W's for @HockeyCanada. #WorldJuniors pic.twitter.com/MTvr9QjRXA

Raddysh became the first Canadian since Brayden Schenn (December 2010) to score four goals in a goal, deflecting another shot past Grigals for a 9-1 lead in the early stages of the third period.

Despite the growing margin, the Latvians didn’t give up as Martins Dzierkals burst past Myers before shifting to the backhand and sliding the puck past Hart to make it a 9-2 game midway through the third period.

Canada hit double digits with 1:55 remaining in regulation as Julien Gauthier took a picture-perfect pass from Pierre-Luc Dubois and redirected it past a helpless Grigals to make it a 10-2 game.

Hart’s performance earned him his second victory of the tournament as Canada improved to 3-0-0 and advanced to the quarter-finals set for Jan. 2 in Montreal. Canada has yet to secure first place in Group A, with that decision on the line New Year’s Eve (1:30 p.m. MT) with a classic tilt against the archrival United States.

WATCH the highlights in @HC_Men's 10-2 win over Latvia (@lhf_lv) to take the lead in the Toronto group at the #WorldJuniors. pic.twitter.com/gULRMcV3rt

In other Thursday action at the 2017 IIHF World Junior Championship, Denmark upset the Czech Republic with a 3-2 overtime win, while the United States edged Russia by a 3-2 regulation final. Sweden knocked off Finland by a 3-1 margin to round out the day.