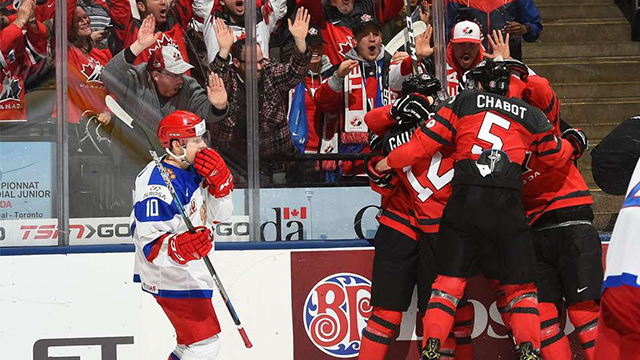 Mathew Barzal had a goal and two assists to lead Canada to a 5-3 victory over Russia to open the 2017 IIHF World Junior Championship at the Air Canada Centre in Toronto on Monday night.

The 19-year-old Barzal, a product of Coquitlam, B.C., was named Player of the Game for Canada as a result of his efforts.

A first round pick (16th) of the New York Islanders and star for the Western Hockey League’s Seattle Thunderbirds, Barzal did all his damage with the man advantage as Canada converted on 50 per cent of its power-play opportunities, going 3-for-6 in their tournament opener.

With the game knotted 1-1 in the second period, Barzal set up Canadian captain Dylan Strome as the hosts took a 2-1 lead with Russian defender Mikhail Sergechyov serving a hooking minor. Shortly thereafter, Nicolas Roy capitalized at even strength and Canada took a 3-1 lead into the second intermission.

The Russians got into penalty trouble once again early in the third period as Regina Pats defenceman Sergey Zborovskiy was tagged for tripping 2:47 in. Picking up a loose puck in the slot, Barzal chipped the rubber past Russian goaltender Ilya Samsonov only 16 seconds into the man advantage as Canada took a commanding 4-1 lead.

Matt Barzall is named Player of the Game for Canada; Yegor Rykov picks up the honour for Canada. #CANvsRUS #WorldJuniors pic.twitter.com/i3xvbr3QiD

The Russian tent didn’t fold though as captain Kirill Kaprizov returned the favour, scoring on the power play with Tyson Jost in the box for tripping only 2:09 after Barzal had given Canada a three-goal edge. But after getting his team back in the game, it was Kaprizov flagged for roughing and Canada was back to the man advantage.

Taking the puck from the left face-off circle, Barzal powered his way towards the Russian cage before firing a quick snap shot off the left shoulder of Samsonov. The rebound careened right to Strome who had nothing left to do but bury into the yawning cage and Canada once again enjoyed a three-goal advantage, making it 5-2 with 10:54 to go in regulation.

The Russians received another quick response from Yegor Rykov, who made it 5-3 only 90 seconds later, but from there Canada went into shutdown mode as Everett Silvertips goaltender Carter Hart turned aside a total of 14 pucks to earn the win in the tournament opener.

While Canada saw contributions from two WHL stars in Barzal and Hart, Kelowna Rockets’ forward Dillon Dube also chipped in with an assist in 12:12 of ice time. Barzal’s 18:30 time on ice led all Canadian forwards, while Calgary Hitmen defenceman Jake Bean logged 18:43 worth of ice time on the blueline.

On top of outscoring the Russians by a 5-3 margin, Canada outshot their rivals by a 37-17 spread.

With the win, Canada moves to 1-0-0-0 and sits second in Group B. After opening day at the 2017 IIHF World Junior Championship, the United States ranks first in Group B following a 6-1 win over Latvia, with a goals differential of plus-5.

Next up, Canada will take on Slovakia on Tuesday night (6 p.m. MT) at the Air Canada Centre in Toronto.

In other action on opening day of the annual international tournament for world junior hockey supremacy, Group A featured Sweden knocking off Denmark by a 6-1 final, while the Czech Republic snuck by Finland in a 2-1 decision.