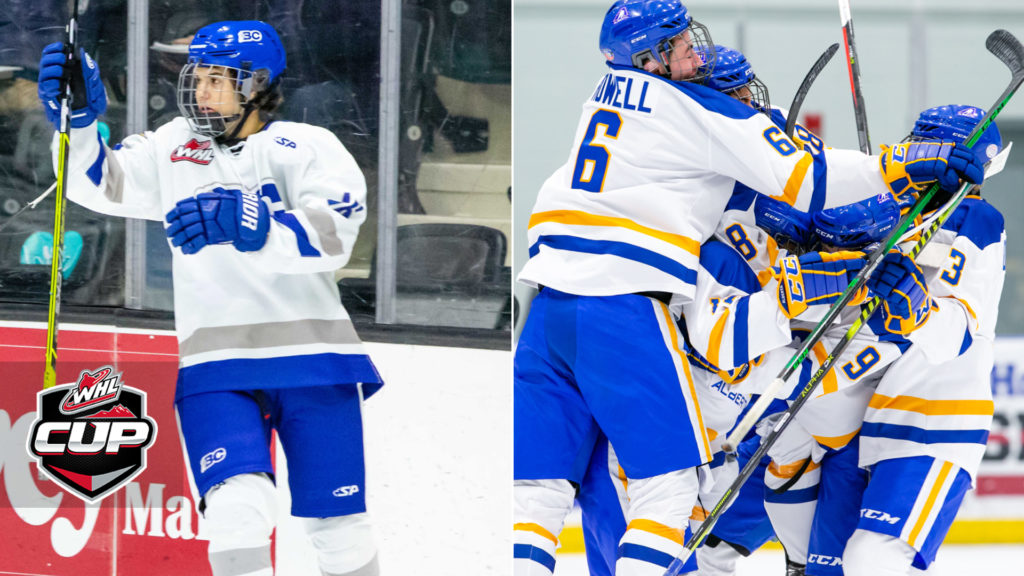 Red Deer, Alta. – The showdown for supremacy is set at the 2021 WHL Cup, with Team B.C. poised to take on Team Alberta in the gold medal game on Sunday at Peavey Mart Centrium. The bronze medal game will feature Team Saskatchewan and Team Manitoba battle it out for third place.

Semifinal Saturday saw Team B.C. romp past Team Saskatchewan by a 9-2 margin in the early game while Team Alberta blanked Team Manitoba by a 2-0 score later in the afternoon.

Tomas Mrsic was electric for Team B.C., finding the back of the net four times, including three during the first period of play, one of which served as the game’s insurance goal. The product of Surrey, B.C., opened the scoring 4:50 into the affair only to see Saskatchewan respond moments later with Prince Albert product Ashton Tait getting his third of the tournament. Mrsic broke the 1-1 tie and putting Team B.C. in front for good, notching his second of the afternoon at the 12:39 mark of the first period.

Mrsic completed the first-period hat trick with 3:26 to go, tallying a power-play marker to put B.C. ahead 4-1. Miguel Marques gave Team B.C. a commanding 5-1 advantage, notching his fifth goal of the tournament with 19 seconds remaining in the opening period. Marques finished the day with a four-point effort of his own, adding three assists.

The second period saw Mrsic, who regularly skates with the CSSHL’s Delta Hockey Academy, secure his fourth goal of the day.

Team Saskatchewan put one more on the scoresheet thanks to Cole Peardon of the Saskatoon Blazers, but the third period tally was too little too late for the lads from the Land of Living Skies, as B.C. two more third-period goals to put an exclamation point on the victory.

Goaltender Evan Gardner turned aside 23 of 25 shots to record the victory between the pipes.

A first-period strike from Delta Hockey Academy’s Gavin Garland gave Team Alberta a 1-0 lead 9:23 into the afternoon affair, and thanks to a 24-save clean slate from netminder Madden Mulawka, it held up as the game-winning goal as Alberta bested Manitoba by a 2-0 tally.

Nanton product Coy Pighin provided some insurance for Alberta midway through the second period, finding the back of the net for the first time at the 2021 WHL Cup.

From there, Alberta put things on lockdown, keeping Manitoba to a mere four shots during the third period, protecting the two-goal advantage and punching a ticket to Sunday’s gold medal game against British Columbia.

Team Manitoba and Team Saskatchewan will take to the Peavey Mart Centrium ice Sunday at 10 a.m. MT, facing off for the bronze medal.

These two squads met during round-robin play on Friday night, with Team Manitoba claiming a 3-2 win on the strength of a third-period game-winner from Clarke Caswell.

The gold medal game between Team Alberta and Team B.C. is set for a 1 p.m. MT puck drop at the Peavey Mart Centrium.

The two teams battled through a nail-biter on Friday, in which B.C. edged out its Alberta rival in overtime by a 5-4 tally to claim first place in the round robin. It was Oliver Josephson providing the game-deciding goal 3:36 into overtime for Team B.C.