Americans’ Rasmussen named WHL On the Run Player of the Week 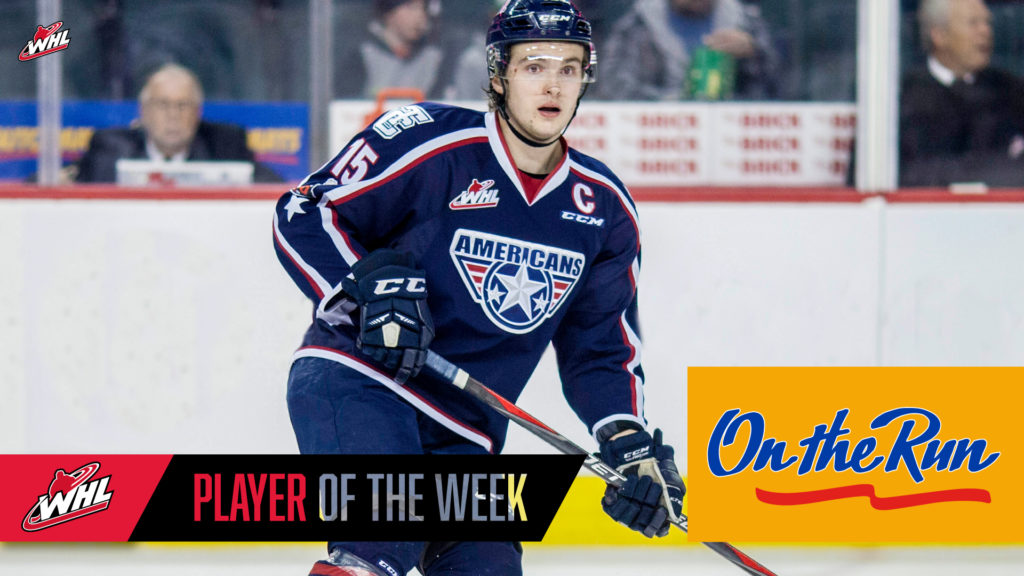 Calgary, Alta. – The Western Hockey League announced today that Tri-City Americans captain Michael Rasmussen has been named the WHL On the Run Player of the Week for the week ending April 8, 2018.

Rasmussen, who was selected by the Detroit Red Wings in the first round, ninth overall, of the 2017 NHL Draft, registered seven points (4G-3A) and a plus-five rating in two games as the Americans took a commanding 2-0 lead in their best-of-seven Round Two series against the Victoria Royals in the 2018 WHL Playoffs.

In the series-opening game Friday, Rasmussen had a goal and three points as his team won by a 7-0 result. The Surrey, B.C. product scored the opening goal of the game, having it stand up as the game-winner. He also picked up a primary assist on the insurance goal and a power play assist later in the game. He led a sweep of the three stars of the game and was also named the first star of the night across the WHL.

Overall, Rasmussen finished with five points (3G-2A) at even strength and two points (1G-1A) on the power play. The first two games have been a continuation of Rasmussen’s successful voyage into the 2018 WHL Playoffs. Through six games this post-season, the 6-foot-6, 221-pound forward has 19 points (9G-10A), featuring four power-play goals and a pair of game-winning goals.

Though he missed part of the season due to injury, Rasmussen still set career-highs this season with 59 points (31G-28A) in 47 games. He set personal highs for points and assists while finishing one goal shy of equalling his 32-goal performance from the 2016-17 WHL regular season.

Rasmussen is the first member of the Tri-City Americans to capture WHL On the Run Player of the Week honours.

Rasmussen and the Americans will look to remain perfect in the 2018 WHL Playoffs when they return home to the Toyota Centre to host the Victoria Royals in Game Three of their series on Tuesday, April 10 (7:05 p.m. PT).