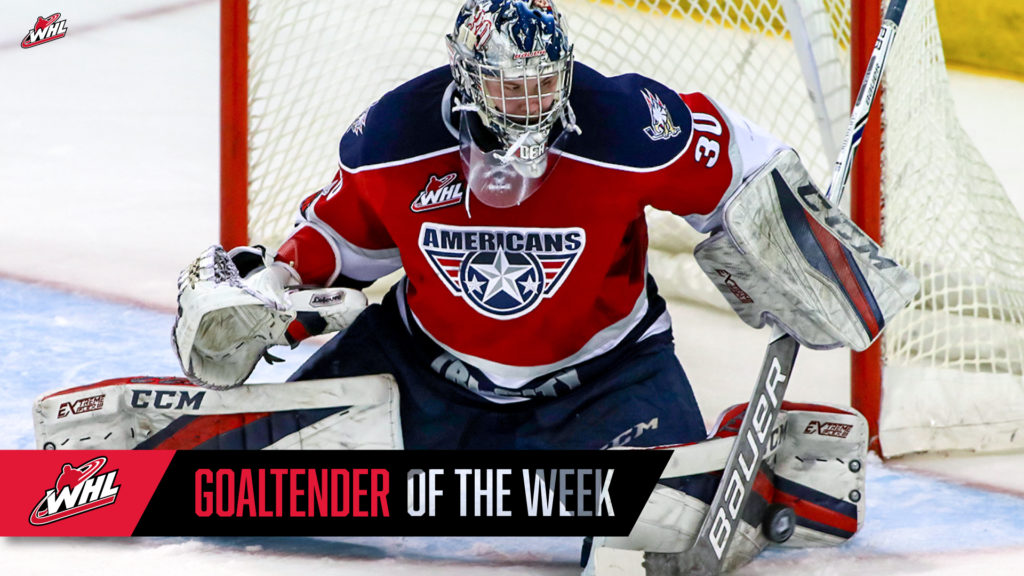 Dea, an overage goaltender from St. Albert, Alta., recorded a pair of wins, 0.50 goals-against-average, stopped 52 of 53 shots for a .981 save percentage and had one shutout  as the Tri-City Americans moved up 2-0 on the Victoria Royals in their best-of-seven Round Two series in the 2018 WHL Playoffs.

Friday, Dea recorded his second shutout of the 2018 WHL Playoffs, stopping all 27 shots sent his way in a 7-0 victory. Dea stopped eight shots in the first, eight shots in the second and 11 more in the third. The Royals also went 0/3 on the power play throughout the game as the Americans took the lead midway through the first and never trailed after.

Saturday, Dea put forth another strong performance, stopping 25 of 26 shots in a 4-1 win for the Americans, helping them stay a perfect 4-0 on the road in the 2018 WHL Playoffs. Dea stopped eight shots in the first, seven in the second, and 10 more in the third, earning third star honours in the contest.

Through six games in the 2018 WHL Playoffs, Dea’s record stands at 5-0-0-0, with a 2.33 GAA, .919 SV% and two shutouts. Among all WHL goaltenders in the post-season, Dea ranks second in GAA, third in SV%, tied for second in wins and tied for first in shutouts.

Dea and the Americans will look to remain perfect in the 2018 WHL Playoffs when they return home to the Toyota Centre to host the Victoria Royals in Game Three of their series on Tuesday, April 10 (7:05 p.m. PT).