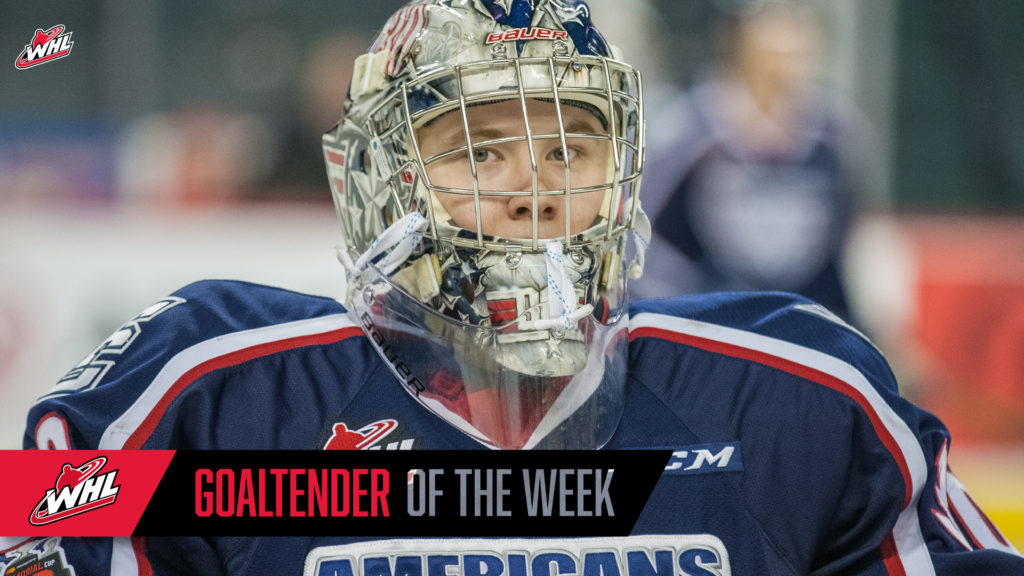 Dea stood tall in net for 151:26 of action this past week, going 2-0-0-0 with a 1.58 goals-against-average, and stopped 78 of 82 shots for a .951 save percentage as the Americans locked down the first of two wild card spots in the Western Conference.

Taking on the U.S. Division champion Everett Silvertips Tuesday, Dea stopped 33 of 35 shots to secure a 4-2 victory for the Americans. Friday, Dea stopped 36 of 37 shots to score a 2-1 victory over the Spokane Chiefs, earning first star honours in the game. In the Americans’ regular season finale Sunday, Dea split the duties between the pipes with teammate Beck Warm, stopping nine of 10 shots in 31:26 of action during a 5-2 win over the Seattle Thunderbirds, earning third star honours in the contest.

The victory by the 21-year-old Dea marks the 12th time this season the WHL Goaltender of the Week Award has been awarded to a goaltender in the U.S. Division. The East Division has won the award six times while the B.C. Division has captured four of the honours with the Central Division capturing the award three times.

Dea will look to continue his successful season into the 2018 WHL Playoffs when the Americans open up their first round playoff series against the Kelowna Rockets on Thursday, March 22 (7:05 p.m. PDT) at Prospera Place.