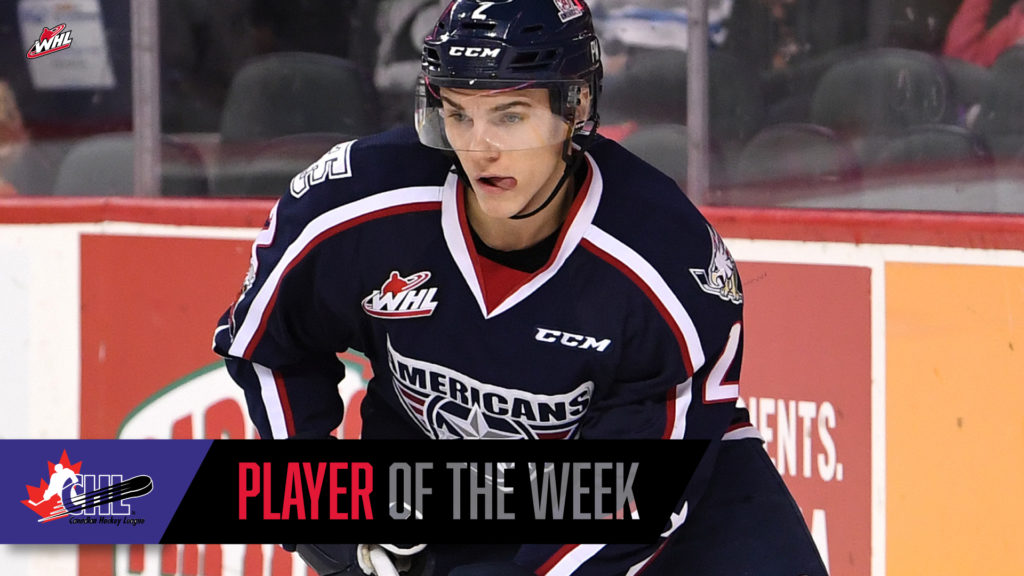 Toronto, ON – The Canadian Hockey League today announced that Carolina Hurricanes prospect Jake Bean of the Western Hockey League’s Tri-City Americans is the CHL Player of the Week for the playoff week ending April 15 after recording eight assists in two games with a plus-minus rating of plus-eight.

Bean, who was selected in the first round, 13th overall, by the Hurricanes in the 2016 NHL Draft, helped the Americans stay perfect through Rounds One and Two of the 2018 WHL Playoffs with a pair of multi-assist efforts to complete the four-game series sweep over the Victoria Royals. In Game Three on Tuesday, the defenceman produced a career-best five assists in a 6-5 win, then delivered three assists in Game Four on Wednesday, earning first star honours in the 5-3 series-clinching victory.

A 6-foot-1, 170-pound, 19-year-old from Calgary, Alta., Bean joined the Americans in January and played 32 regular season games collecting 21 points (7G-14A). He has since accumulated 14 points (1G-13A) in just eight playoff games, the third-highest scorer on his team. He’s also tied for the defensive scoring lead in the 2018 WHL Playoffs.

The Americans have advanced to the WHL’s Western Conference Championship Series for the first time since 2012 and will face the Everett Silvertips beginning Friday, April 20 (7:35 p.m. PT) at Angel of the Winds Arena in Everett, Wash.

Also considered for the award this week were a pair of Ottawa Senators prospects including Drake Batherson of the Blainville-Boisbriand Armada with three goals and five assists for eight points in their final three games of a five-game series win against the Moncton Wildcats, and Logan Brown of the Kitchener Rangers with one goal and five assists for six points in the final four games of a six-game series win over the Sarnia Sting.