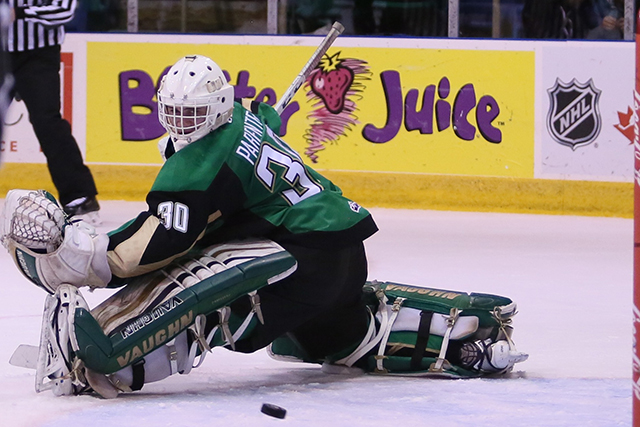 The torch has officially been passed in Prince Albert.

After two seasons as the starting goaltender for the Raiders, 19-year-old Rylan Parenteau has been traded, giving way to 17-year-old Ian Scott to take over as the full-time No. 1 netminder.

The Raiders sent the 6-foot-1, 187-pound Parenteau, who turns 20 on Nov. 16, to the Tri-City Americans Thursday morning, acquiring 18-year-old goaltender Nicholas Sanders and a third round pick in exchange.

“This was a very hard decision,” said Curtis Hunt, general manager of the Raiders, in a team release. “Rylan is a quality person, player and Raider. However, we felt it was necessary based on the players on the roster. We’re sending Rylan to an organization that we feel, with his addition, is in the mix to compete. We want to thank Rylan for everything he has done for the organization on the ice and in the community and we wish him the best with the Americans.”

The Raiders selected Parenteau, a native of Saskatoon, with the 53rd overall pick in the third round of the 2011 WHL Bantam Draft.

Parenteau brings with him five games of post-season experience, as the Raiders dropped their 2016 first-round series to Moose Jaw in five games.

He was also voted the 2016 WHL Royer Hardest Working Player, as voted upon by fans.

While Parenteau departs, the reigns are now handed over to Scott, the Raiders first round pick (ninth overall) from the 2014 WHL Bantam Draft.

Of the Raiders seven games to date in 2016-17, Scott has appeared in six. While his 1-4-0-0 record might not be sparkling, he carries a 2.99 GAA and .922 SP over that stretch. Parenteau has only appeared in two games for the Raiders this season, surely evidence of the changing guard.

In Tri-City, Parenteau will join 17-year-old Beck Warm in the Americans crease while 19-year-old Evan Sarthou remains on the shelf with a lower-body injury.

“We are excited to add Rylan to our team,” said Bob Tory, governor and general manager of the Americans, in a team release. “He is an experienced goaltender who immediately upgrades our team depth.”

In conjunction with the addition of Parenteau, the Americans placed 20-year-old defenceman Jeff Rayman on waivers. Rayman, a native of Fernie, B.C., has 147 regular season games of WHL experience under his belt.

The waiving of Rayman gets the Americans back to the overage limit of three, with Parenteau joining captain Tyler Sandhu and defenceman Dalton Yorke.

The Raiders engage with the Brandon Wheat Kings for a home-and-home tussle this weekend, beginning Friday in southern Manitoba. The two teams return to the Art Hauser Centre in Prince Albert for a  Saturday night puck drop. Through seven outings, the Raiders are 2-5-0-0 and sit sixth in the WHL’s East Division.

The Americans are at home for a pair of contests this weekend, welcoming the Kamloops Blazers on Friday before opening the doors to the Prince George Cougars on Saturday. Through seven games, the Americans are 4-3-0-0 and third in the WHL’s U.S. Division.