Alberta claims top spot in Pool B after third-period comeback 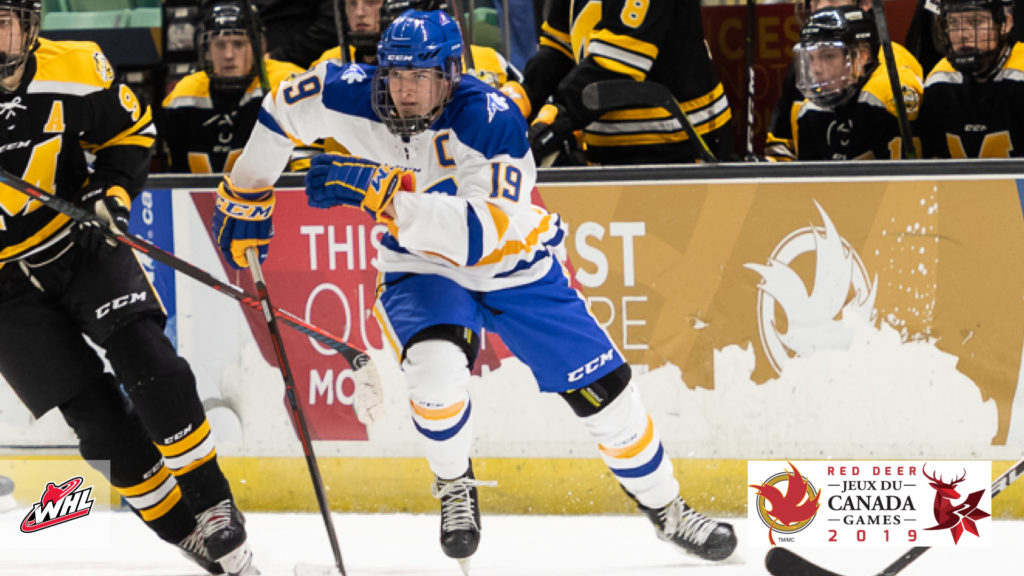 Round-robin action concluded at the 2019 Canada Winter Games in Red Deer, Alta. Monday, with first place in Pool B still on the line. Western Hockey League prospects once again factored into provincial and territorial success for their respective teams.

Saskatchewan wasted little time in getting on the board as Kevin Anderson (Regina, Sask./Kootenay ICE) put his province up 1-0 4:23 into the first. Linklater’s first goal would double Saskatchewan’s lead before the end of the period, making it a 2-0 game heading into the second.

Linklater’s second of the game, as well as goals from Blake Swetlikoff (Regina, Sask./Spokane Chiefs) and Klassen would make it a 5-0 score before Manitoba got on the board via Carson Lambos (Winnipeg, Man./Kootenay ICE).

That’d do little to stop Saskatchewan though, who added goals from Nolan Allan (Davidson, Sask./Prince Albert Raiders) and Logan Cox (Prince Albert, Sask./Spokane Chiefs) in the final 20 minutes to round out the score.

In a rematch of the 2017 WHL Cup gold medal game, Alberta earned a dramatic 5-4 victory after trailing 4-2 early in the final period of regulation.

B.C. took the lead early on with a pair of goals in the first period as Steel Quiring (Vernon, B.C./Kelowna Rockets) and Ty Gibson (Victoria, B.C./Everett Silvertips) each found the back of the net.

Graham Sward (Abbotsford, B.C./Spokane Chiefs) would make it a three-goal advantage early in the second, but Alberta came ready to play in the middle period. Goals from Craig Armstrong (Airdrie, Alta./Prince George Cougars) and Colton Dach (Fort Saskatchewan, Alta./Saskatoon Blades) cut the lead to one after 40 minutes, giving Alberta a glimmer of hope.

That hope appeared to take a hit 46 seconds into the third as Trevor Wong (Vancouver B.C./Kelowna Rockets) made it a 4-2 game, but the host province would have enough resolve for the comeback.

With 8:34 left in regulation, Marc Lajoie (St. Albert, Alta./Tri-City Americans) made it a one-goal game and Ostapchuk tied it up with 3:11 left in the contest.

That would set the stage for Tschigerl’s game-winning goal in the final minute, giving Alberta their first lead of the game.

Samuel Schofield (Yellowknife, NWT/Swift Current Broncos) scored twice and finished with four points while Jonah Bevington (Yellowknife, NWT/Portland Winterhawks) contributed a pair of goals and three points Monday afternoon to close out the Northwest Territory’s round robin with a 6-0 win over Nunavut.

N.W.T. scored three times in the first, once in the second, and twice more in the third for the victory.

Bevington opened the scoring, later adding the team’s fourth goal of the game. Schofield tallied the third and sixth goals of the contest for his home territory.