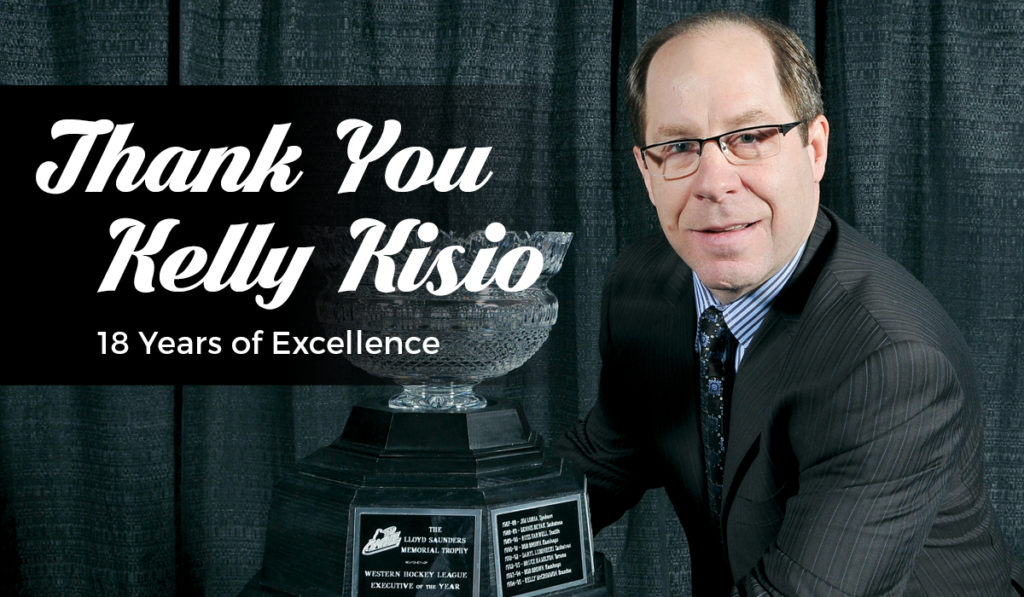 Calgary, AB – The Calgary Hitmen Hockey Club, along with the Calgary Sports and Entertainment Corporation (CSEC), would like to congratulate Kelly Kisio on being named a professional scout of the Las Vegas NHL Franchise.

“We have been fortunate to have had Kelly Kisio lead our Calgary Hitmen franchise for 18 seasons,” said CSEC president & CEO Ken King. “He has established a tradition of success and consistency during his tenure, advancing the Hitmen to the playoffs in 17 of 18 seasons; an amazing accomplishment in the Canadian Hockey League. With an average of 42 wins per season and two WHL championship titles, Kelly has set a strong precedent. We thank Kelly for his incredible commitment and leadership. He has been a great friend to the Hitmen organization and to all of us personally. While we will miss him, we are extremely proud to wish him luck in his career with the new Las Vegas NHL Franchise.”

Kisio joined the Hitmen as general manager ahead of the 1998-99 Western Hockey League season following an amateur scouting role with the Calgary Flames that began after his NHL playing career. Under his leadership, the Hitmen have earned 763 regular season wins and twice captured the Ed Chynoweth Cup as WHL Champions (1999 & 2010).  In addition to his general manager duties, Kisio spent four seasons in the dual role of general manager and head coach from 2004-08, guiding the Hitmen to 167 regular season victories over that span. In June 2013, the two-time Lloyd Saunders Memorial Trophy recipient as WHL Executive of the Year (2003-04 & 2008-09) was appointed president of hockey operations and alternate governor.

“It has been an amazing journey here in Calgary, first with the Calgary Flames and then for many seasons to follow with the Calgary Hitmen,” said Kisio.  “I was truly fortunate to be surrounded by a group of very great people for 23 years.  It is rare to be part of an organization for that length of time and I am honoured to have received the opportunity.  I would like to thank Ken King and Murray Edwards for their support over the seasons as well as the numerous Calgary Sports and Entertainment Corporation staff for all of the friendships. The memories I have had the pleasure of making here will be carried with me as I look forward to this new role with the Las Vegas team.”

A native of Wetaskiwin, Alberta, Kisio starred in the Alberta Junior League with the Red Deer Rustlers prior to joining the WHL’s Calgary Wranglers. He spent two seasons with the Wranglers (1978-80), posting back-to-back 60-goal campaigns while adding Rookie of the Year to his resume after his 1978-79 WHL debut.

During the 1982-83 season, he began an NHL playing career that spanned 13 campaigns with the Detroit Red Wings, New York Rangers, San Jose Sharks and Calgary Flames. Kisio served as captain of the Rangers for three and a half seasons and played in the 1993 NHL All-Star game.  He finished his NHL career with 229 goals and 658 points in 761 regular season games.