A LOOK AT THE 2014 WHL CHAMPIONSHIP SERIES 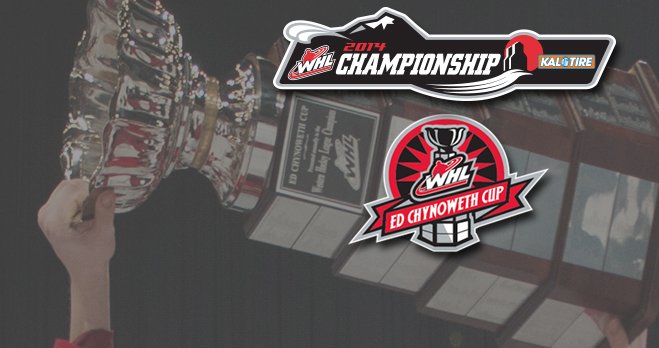 The Oil Kings and Winterhawks meet up for a third consecutive season in the WHL Championship series, marking just the second time in WHL history that two teams will meet for three straight finals.  The last time it happened was in the WHL’s early days when the Flin Flon Bombers met the original Edmonton Oil Kings in the 1969, 1970 and 1971 finals.

Here’s a look at the 2014 WHL Championship series match-up:

Reid Petryk scored the shootout winner as the Edmonton Oil Kings managed a 5-4 victory over the visiting Portland Winterhawks on December 6, 2013, in the only regular-season meeting between the Clubs.

Edgars Kulda and Cody Corbett each tallied a goal and an assist while Curtis Lazar and Dysin Mayo also scored in regulation play for the Oil Kings, who outshot the visitors 41-37 through 65 minutes.  Tristan Jarry made 33 saves in regulation play and stopped three of four shootout attempts in the win.

Taylor Leier scored twice while Derrick Pouliot and Nic Petan each picked up a goal and two assists for Portland, who rallied back from a 4-2 deficit in the third period, tying the game on a pair of goals by Leier at 17:13 and 19:04 of the third period.  Brendan Burke made 37 saves for the Hawks in regulation play.

The Portland Winterhawks become just the fourth team in WHL history to reach the League Championship in four consecutive seasons, and the first to do so since the New Westminster Bruins accomplished the feat from 1975 to 1978.  Having lost their first two trips to the WHL Championship series – falling to Kootenay in 2011 and Edmonton in 2012 – the Hawks finally won it all last year, defeating the Oil Kings in six games.  Now, in their fourth straight appearance, the Winterhawks look to pull off a repeat over a familiar foe.

This year’s edition of the Winterhawks has proven just as dominant as any of the three previous editions that won the Western Conference championship.  Even though they lost several big-time players from last year’s Championship roster, they’ve seen others take major steps forward to fill those gaps and have also managed to acquire key components over the course of the 2013-14 season.

With a talented and dangerous group of forwards including Nic Petan – the MVP of the Western Conference Championship Series – Oliver Bjorkstrand, Brendan Leipsic, Taylor Leier and Chase De Leo, the Winterhawks have once again been the most dangerous offensive Club in the Western Hockey League.  Having already broken through two of the WHL’s top three defensive sides in Victoria and Kelowna, it appears as though not much can slow this collection of scorers.  Now, they’ll face their biggest match-up against the League’s best defense in the Oil Kings.  They’ll have to battle through a tough, physical and well-coached defense corps to hoist the Ed Chynoweth Cup once again.  Finding a way to beat Edmonton’s penalty killing unit will be key for the Hawks to have offensive success.

Defensively, the Hawks have been solid, giving up just 33 goals in 14 games.  While top rearguards Derrick Pouliot and Matt Dumba have been able to bring significant offensive contributions to the table, combining for seven goals and 38 points through 14 games, they’ve also held together a defense corps that successfully shut down a very deep Kelowna offense.  For a third year in a row, Portland’s defense will have to find a

way to stop the always-dangerous Curtis Lazar, and the physical onslaught of power forwards Henrik Samuelsson and Mitch Moroz.  While Pouliot and Dumba will take on big minutes, others like Garrett Haar and Anton Cederholm must raise their compete level versus an Edmonton side that rarely gets outworked.

18-year-old Brendan Burke held down the starting job through most of the regular season and through the first two playoff rounds, performing admirably.  However, after Burke struggled through the first four periods of the Western Conference Championship series versus Kelowna, the Hawks went with 20-year-old veteran Corbin Boes, who proceeded to post a 4-0 record with a 1.84 goals-against average and a .941 save percentage versus the WHL’s top regular-season Club.  Whoever the Winterhawks decide to run with in the WHL Championship series, they’ll have to outduel one of the League’s best in the Oil Kings’ Tristan Jarry.

The Edmonton Oil Kings are making their third consecutive appearance in the WHL Championship series, having stormed their way through the Eastern Conference playoffs with a 12-2 record.  Now, for a third year in a row, they’ll face the Portland Winterhawks for the Ed Chynoweth Cup.  Having defeated the Hawks in 2012 and then losing to them in 2013, Edmonton looks to come out with another Cup win in the rubber match between the two WHL powerhouses.

The Oil Kings enjoyed yet another outstanding season, finishing first in the Central Division and Eastern Conference for a third straight year, and tying a WHL record with their third consecutive season with 50 or more wins.  They’ve carried their dominant form through the playoffs.  With high-end talent and plenty of depth up front, an air-tight defence corps, and one of the WHL’s top goaltenders manning the crease, the Oil Kings look to take back the Ed Chynoweth Cup.

Up front, the Oil Kings have gotten plenty of mileage out of 18-year-old Curtis Lazar, the MVP of the Eastern Conference Championship Series who has not only led the team offensively, but provided strong two-way play.  The Ottawa Senators’ first-round pick has officially become the Oil Kings’ all-time playoff scoring leader, and will look to add to his totals versus the Winterhawks.  Sophomore forward Brett Pollock has emerged as a top offensive threat for the Oil Kings, leading the team with 10 post-season goals.  Big, hulking forwards such Henrik Samuelsson and Mitch Moroz have chipped in, but will be expected to contribute more with the Cup on the line, while Edgars Kulda will need to continue his strong play.  The Oil Kings will also look to the likes of Reid Petryk and Riley Kieser to contribute up front.

Always a strong defensive Club, the Oil Kings allowed only 27 goals through their first 14 post-season contests, which is less than two goals per game.  Edmonton boasts a terrific penalty killing unit, having given up just seven power play goals through the first three rounds.  They’ll need to be

18-year-old Tristan Jarry watched from the bench in each of the last two WHL Championship series’ versus Portland as back-up to Laurent Brossoit.  Now, it’s Jarry’s turn to take the crease.  The Pittsburgh Penguins prospect put up outstanding numbers during the regular-season, being named the Eastern Conference finalist for WHL Goaltender of the Year, and has been equally good in the post-season.  Facing his toughest challenge yet, Jarry will need to raise his game even more to stop a Portland attack that has scored a whopping 406 goals through the regular season and playoffs, combined.