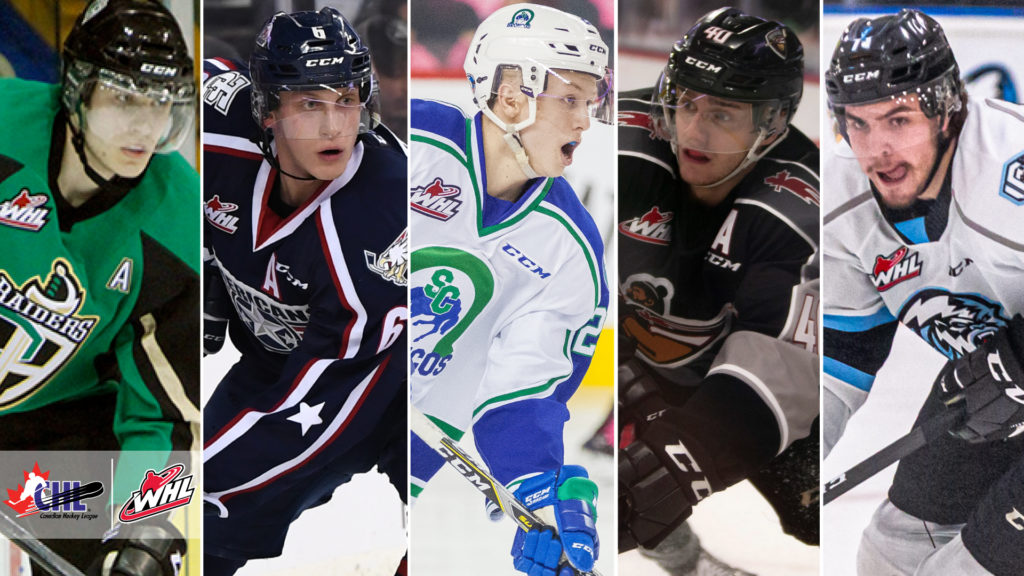 Every year Canadian Hockey League teams have the opportunity to enhance their rosters through the Import Draft process selecting up to two players from outside North America.

While the transition period can vary as Import players adapt to the CHL style of play and a new community, many of these selections can turn into stars and true difference makers for clubs across the Western Hockey League, Ontario Hockey League, and Quebec Major Junior Hockey League.

Here’s a look back at a collection of the most notable WHL selections from 2010-2019.

Baertschi developed into a first-round NHL Draft pick in 2011 following an 85 point (34G-51A) WHL rookie campaign over 66 contests then returned to record 94 points (33G-61A) in 19 fewer games for the Winterhawks. The Bern, Swiss native played parts of four seasons with the Calgary Flames organization before joining the Vancouver Canucks for the last six.

Rask, selected third overall by the Hitmen, in the 2011 CHL Import Draft, tallied 63 points (33G-30A) over 64 games during his rookie campaign with Calgary before becoming a Carolina Hurricanes prospect. In total, Rask collected 104 points (47G-57A) in the WHL before making the jump to the professional ranks in Carolina and most recently with the Minnesota Wild.

Before winning the Art Ross Trophy as the NHL’s top scorer, Draisaitl was piling up the points for the Raiders. The Koln, Germany native was selected second overall in the 2012 CHL Import draft and immediately made an impact upon joining the Raiders. The 6-foot-2, 207-pound forward went from 58 points (21G-37A) in 64 regular-season games as a rookie to an explosive 105 point (38G-67A) campaign in 2013-14 that led to his third overall selection by the Edmonton Oilers. He returned midway through the 2014-15 season to lead the Kelowna Rockets to a WHL championship and was one goal shy of a Memorial Cup title despite earning tournament MVP honours.

The Latvian born Bukarts had a productive three seasons in the WHL, playing primarily for Brandon but finishing in Portland with a total of 190 points (92G-98A) in 192 career games. In his 2013-14 campaign with Brandon, he recorded 28 goals, earning the honour of WHL most goals by a rookie for that season.

Playing the entirety of his WHL career with the Wheat Kings, Provorov made a great contribution to the team. Recording 134 points (36G-98A) in 122 regular-season games as a defenceman, the Yaroslavl, Russia product also helped the team capture their 2016 WHL Championship and tallied the most points (73) by a defenceman that season. Provorov’s success continued as he joined the Philadelphia Flyers after his WHL Championship.

Valimaki patrolled the Americans’ blue line for three seasons where he totalled 138 points (40G-98A) in 159 regular-season games. The Flames chose the Finnish defender in the first round of the 2017 NHL Draft and introduced him to 24 games one season ago, however an ACL injury kept him off the ice in 2019-20.

Heponiemi scored 204 points (56G-148A) in 129 career games for the Broncos helping them hoist the Ed Chynoweth Cup in 2018 while earning CHL Sportsman of the Year honours. The Finnish forward was a second-round selection of the Florida Panthers in 2017 and played this season for the AHL’s Springfield Thunderbirds.

The Kysucke Nove Mesto, SVK forward was selected by the Giants sixth overall in the 2017 CHL Import Draft and has totalled 139 points (61G-78A) in 160 regular-season career games. In 2018, Roman was selected in the fourth round, 122 overall by the Calgary Flames and looks to join their affiliate team, the Stockton Heat, next season.

In 61 games during the 2018-19 regular season, the product of Vitebsk, Belarus posted 40 points (11G-29A), in 61 regular-season games. Protas’ impact shone through in the 2019 WHL Playoffs as he posted 22 points (12G-10A) in 23 games including three power-play goals and two game-winning goals, helping the Raiders capture their second WHL Championship in team history. Later that year, Protas was selected in the third round, 91st overall by the Washington Capitals at the 2019 NHL Draft.

One year ago, a fourth-round NHL Draft pick turned into the fourth overall CHL Import Draft pick. The Czech Republic born Chicago Blackhawks prospect joined the ICE for their first season in Winnipeg and led all WHL rookies in scoring with 63 points (29G-34A) 53 regular-season games.

In January, the Havlickuv Brod, Czech Republic product recorded points in eight of his nine games during the calendar month, positing five multi-point games. He registered one three-point game and four two-point games with one multi-goal game in those performances. For his efforts, the 6-foot-3, 192-pound forward was recognized as the WHL’s Rookie of the Month.