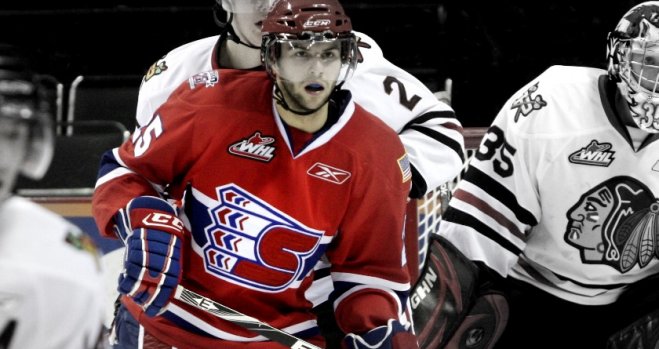 A total of nine Canadian Hockey League players, including eight from the Western Hockey League, will be donning the Evergreen and Gold of the University of Alberta for the 2011-12 season.

Acting head coach Stan Marple has brought in six forwards and three defencemen, in one of the deepest and most talented recruiting classes in recent memory.  The list includes one 30-goal and 80-point forward; three more forwards who scored 20-plus goals and 60 points or better in the WHL; eight players who stand 6’0” or taller; and two NHL 2009 draft picks.

“The additions of Koper, Ferguson, and Hickmott, combined with Reddick, Dobrowolski, and Toomey up front gives us four very strong lines and excellent depth through our entire roster,” said Marple, who has nine returning forwards from last season, as well as five returning defencemen and three goalies.

“On defense,” continued Marple, “I know Thomas Carr and Jordan Rowley will make an immediate impact, and I am very interested to see Barron Smith play, as he obviously has wonderful hockey genes, and will no doubt push his teammates for ice time week in and week out.”

Koper, a 6’0” left-wing player from Edmonton, spent five seasons with the Spokane Chiefs, and is a 2009 seventh-round draft pick of the Atlanta Thrashers (187th overall).  His best season in the WHL came in 2010-11 when he notched 32 goals and 82 points in 72 games as well as nine goals and 16 points in 17 playoff games.

Reddick, who hails from Manor, SK, will look to lock down a top-two center position on the Bears’ depth chart after recording three 20+ goal seasons with Tri-City and one season (2008) where he produced 74 points.

Misson, BC center Jordan Hickmott is a two-time 20-goal scorer in the WHL, who reached a career best last season with the Edmonton Oil Kings by scoring 28 goals and 66 points.

Dobrowolski, who stands 6’3” and had 52 points playing wing last season for the Prince George Cougars where he was coached by former Golden Bear Dean Clarke (1986-87), and Toomey, a 6’4” center from Leduc who banked 22 goals, 39 points, and 137 PIMs last season for Seattle, significantly upgrade the size quotient for the Bears, a program traditionally small up front.

The blue-line addition of Rowley brings significant skill to an already well-balanced defence corps.  The Edmontonian spent time with both the Kamloops Blazers and Prince Albert Raiders, highlighted by his nine-goal and 41-assist campaign in 2010.

Fellow Edmontonian Thomas Carr was in the WHL for three seasons, recording 62 points, including 54 assists, and 209 PIMs in 187 games with the Medicine Hat Tigers.  He blossomed last season, picking up 40 points under the tutelage of another former Golden Bear player, Shaun Clouston (1985-86).

Smith, a 6’5” and 210lbs portrayal of excellent size and NHL potential, joins the Bears from the Ontario Hockey League where he played for the London Knights and the Peterborough Petes.  He was drafted one spot after Koper in the 2009 NHL draft, or 188th overall, by the Toronto Maple Leafs.

Golden Bears training camp opens September 1st, and the regular season gets underway on October 7th at Clare Drake Arena against the Regina Cougars.  Alberta, winners of a record 13 CIS titles, are looking to not only defend their Canada West championship this season, but to attend their fifth straight, and 36th overall, CIS championship tournament.