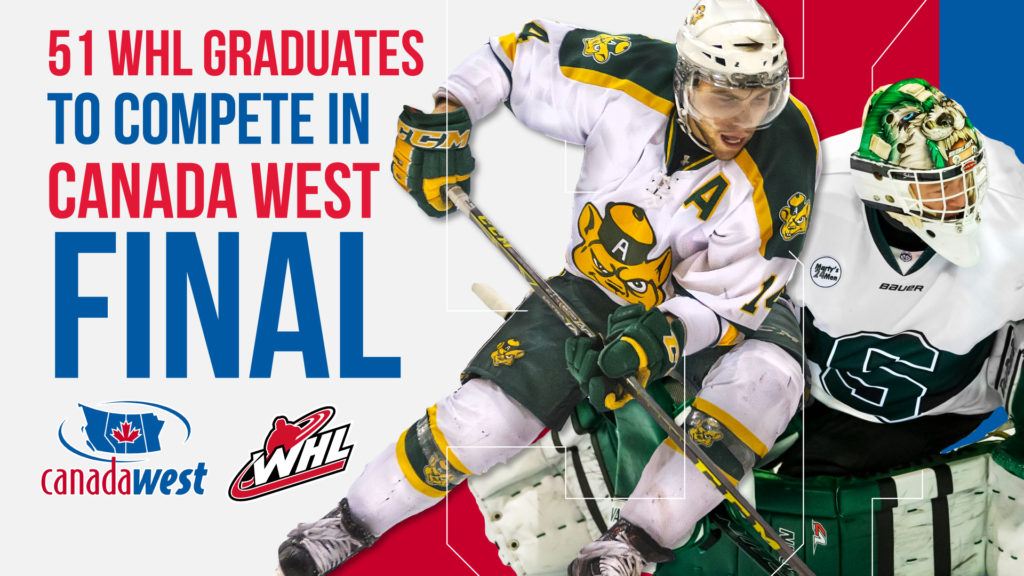 Calgary, AB – The Western Hockey League is proud to announce that 51 WHL graduate players will compete in the 2017 Canada West Final beginning today at Rutherford Rink in Saskatoon, SK.

The University of Alberta Golden Bears and University of Saskatchewan Huskies are set to challenge in a best-of-three series for the Canada West Universities Athletic Association men’s hockey conference championship before then travelling to Fredericton, NB, for the U Sports University Cup, hosted by the University of New Brunswick from March 16 to 19.

The 51 WHL graduates competing in the 2017 Canada West Final are representative of over 365 WHL Scholarship recipients furthering their education.

“The WHL and our member Clubs are very proud to continue offering our players the most comprehensive hockey scholarship program of its kind in North America today,” stated WHL Commissioner Ron Robison. “WHL Clubs are fully committed to providing a world class experience for our players which includes the opportunity to pursue both their academic and hockey goals while playing at the top level of the Canadian amateur hockey system.”

Every player who plays in the WHL is eligible to receive the WHL Scholarship.  For every season a player plays in the WHL, they receive a guaranteed, full-year WHL Scholarship including tuition, textbooks and compulsory fees to a post-secondary institution of their choice. The WHL Scholarship is a fully-guaranteed academic scholarship with no requirement to play university hockey to qualify, and the student-athlete can apply the funding to any post-secondary or career-enhancing program of his choice, including trade schools and professional career training programs.

In addition, current WHL players also receive financial assistance for enrolling in post-secondary classes while playing in the WHL, many of whom are taking online courses through Athabasca University. The WHL and Athabasca University have partnered to offer, through online and other distance education platforms, fully-accredited university courses to any WHL player interested in further pursuing post-secondary studies while playing in the WHL.

Fully funded by WHL member Clubs, all players currently playing in the WHL are encouraged to enroll in post-secondary courses. The financial assistance received for post-secondary studies while playing does not impact on the WHL Scholarship benefits a WHL player is entitled to upon graduating from the League.

Canada West is the premier athletic conference in the country and is home to champion student-athletes that excel on the field, in the classroom and in their communities. Canada West and its 17 member institutions commit to a student-athlete experience where competitive excellence, scholarship and sportsmanship contribute equally towards moulding outstanding graduates and community leaders.