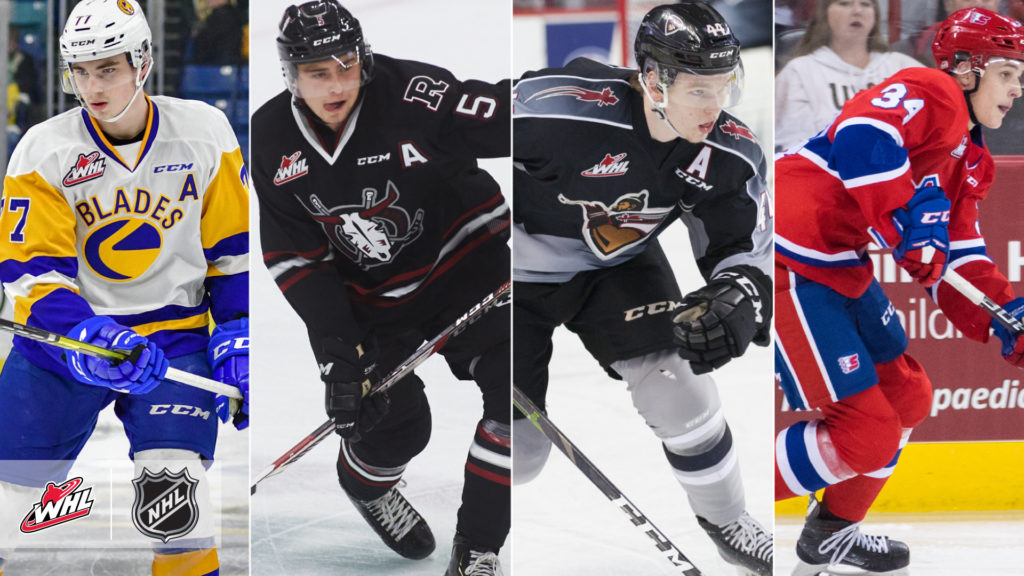 A total of 32 current and former WHL players have sharpened their skills as NHL Central Division teams held their annual development camps.

A break-down by team shows the WHL players listed alphabetically on each team by position and associated with their most current WHL team.

Six WHL players past and present will suit up with the Blackhawks at their development camp. Led by the third-overall selection in the 2019 NHL Draft, Dach will guide this year’s group of attendees while defenceman Cole Moberg, a seventh-round pick of the Blackhawks last month, represents the lone WHL rear guard at the camp. Michal Telpy, an import-draft selection of the Winnipeg ICE will also be in attendance after he was selected in the fourth round of this year’s draft.

A pair of free-agent signings in Hagel and Johnson were at the camp as well after concluding their seasons with the Rebels and the Blackhawks’ AHL affiliate. Americans’ forward Kyle Olson was an invite to the camp.

Practices will be conducted Monday-Thursday and the group will hold one scrimmage on Friday beginning at approximately 9:30 a.m. #Blackhawks https://t.co/zDnE6DofAP

The Avalanche boasted 10 current and former WHL players at their development camp, fuelled by the four WHL players selected at the 2019 NHL Draft. That grouping was led by Giants’ defenceman Bowen Byram, the fourth-overall selection in this year’s draft. Following from the draft class is Sasha Mutala of the Americans, Luka Burzan of the Wheat Kings, and Miner of the Giants.

Formerly selections and now signed prospects of the organization, forward Nick Henry and defenceman Josh Anderson returned to the camp. A WHL Champion with the Broncos in 2018, Anderson recently completed his first season in the professional ranks while Henry split the season between the Regina Pats and Hurricanes.

On top of the drafted or signed prospects, four other players earned invitations as Nolan Kneen from the Blades, Wyatt McLeod of the Edmonton Oil Kings, Logan Barlage of the Hurricanes, and Bryce Kindopp of the Silvertips attended the camp.

The ropes course and team-building was so much fun!

Thanks to CSU Mountain Campus for hosting us. #GoAvsGo pic.twitter.com/vHYE88N1GC

Josh Anderson made gathering all the lilypads (the circles) his mission.#GoAvsGo pic.twitter.com/FNeevQpf6l

A quintet of WHL talent took to the ice with the Stars. Formerly of the Blazers and Silvertips, Vala recently completed his first season of professional hockey in the Stars’ organization. Selected at the 2018 NHL Draft, Barteaux continued to forge his path from the Rebels’ blue line to the Stars’ organization. The link between the Blazers and Stars was strengthened by a pair of camp invites in Stuart and Zazula. Also earning a camp invite was Tyszka, who recently completed his fourth season with the Thunderbirds on the blue line.

These guys sure look good in Victory Green 😎 pic.twitter.com/g8TSmrXisU

⚠️WARNING⚠️ There is a really, really bad drawing of our great state in this video 😬

Our prospects competed against each other off the ice as well at Development Camp in a fun game of Pictionary. pic.twitter.com/NPkRHemFaN

Two talented WHL players from the US Division wound up at the Wild’s development camp in late June. Having completed his fourth season with the Silvertips, Dewar was present at the Wild’s camp after being selected in the third round of the 2018 NHL Draft by the Wild. Selected in the third round of the 2019 draft, Adam Beckman is coming off a strong rookie season that saw him finish second in WHL rookie scoring.

Thanks @mnwild for an awesome week at development camp! pic.twitter.com/Pjqt9tLKNe

Come see #mnwild prospects tonight at 6:30 p.m. for a 3-on-3 tourney & autographs at TRIA Rink. pic.twitter.com/tOHjqom1C5

At the Predators’ camp, the WHL was represented at each position by a single player to give them a trio in attendance. Acquired from the Tampa Bay Lightning in mid-June, Ingram recently completed his second season in the professional hockey ranks with the camp in late June giving him a first experience with his new organization. Up front, Jeannot recently completed the first season in the Predators’ organization, spending it with the AHL’s Milwaukee Admirals. On defence, Yeryomenko attended camp after being selected by the team at the 2018 NHL Draft. Yeryomenko was recently acquired by the Warriors, Jeannot’s former team.

The Stanley Cup Champion Blues had a pair of WHL talents at their camp. Leading the way was Winterhawks goaltender Joel Hofer, the team’s fourth-round pick at the 2018 NHL Draft. Joining him at camp was Czech forward Krystof Hrabik, who recently completed his first season in the WHL by tallying 51 points (21G-30A) in 63 games.

A stick salute for the great fans that came out to support the prospects all week! #stlblues pic.twitter.com/ajD9VxAEsl

The Jets invited a quartet of WHL talents to their camp, with all originating from the Western Conference. Leading the way was drafted and signed prospect Skyler McKenzie, who recently completed his first season in the professional ranks with the Manitoba Moose. Also joining him on the forward core were camp invites Noah Philp and Luke Toporowski of the Thunderbirds and Chiefs, respectively. Rounding out the group was Royals’ defenceman Scott Walford.

A full look at the 2019 #NHLJets Development Camp class! pic.twitter.com/NRk3Iy0iJs

#NHLJets prospects wrap up Development Camp on a positive note.