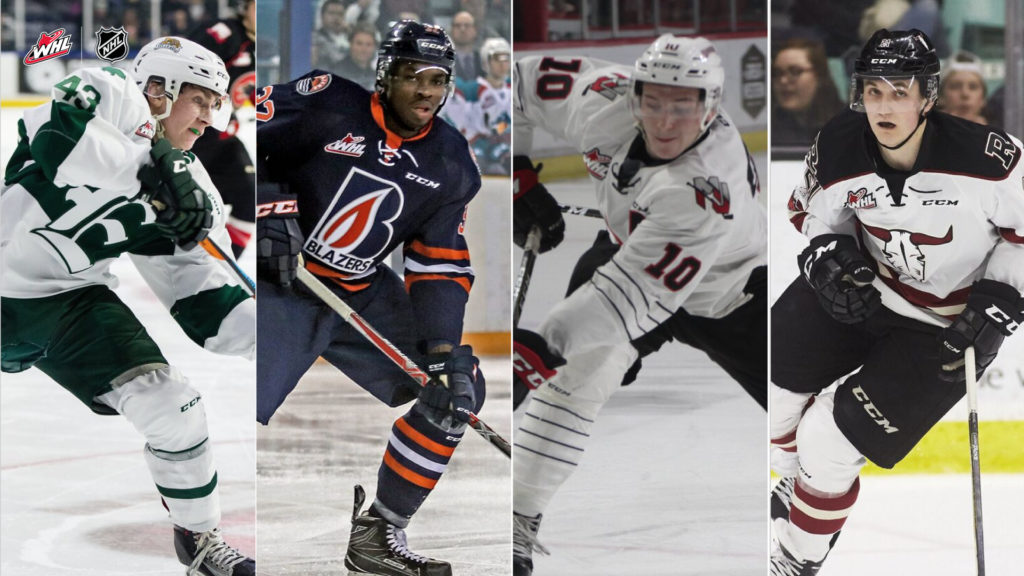 More than 25 current and former WHL players made their way West this past week as NHL Central Division teams held their annual development camps.

The Blackhawks have been dynamic, winning three Stanley Cups in the span of six years. Recently they have been looking for ways to get back into competition after missing the playoffs for the first time in 10 years. They started their shake up by signing their 2017 first round pick, Henri Jokiharju. Jokiharju posted 71 points (12G-59A) with the Portland Winterhawks last season. Playing in the IIHF World Junior Championship he totaled two goals and two assists for four points in five games. Bondra, a 2015 draft pick also attended the Blackhawks camp. In two seasons in the WHL he scored 93 points(47G-46A) in 120 games.

With the ink dry on his first @NHL contract, @henrijokiharju is ready for his next challenge: making the opening night roster. #Blackhawks https://t.co/wzi0kp2y7b

A total of 41 players are scheduled to report to this year's camp.

The Colorado Avalanche bounced back last season under former WHL player and now Head Coach Jared Bednar. Free Agent signing Ty Lewis looks to be part of a young Avalanche core moving forward after posting 100 points (44G-56A)in 70 games last season with the Wheat Kings. He has 191 points (84G-107A) in 190 WHL games. Lewis also brings a winning pedigree, having won the Ed Chynoweth Cup in 2015-16. Another camp attendee has also won the Ed Chynoweth Cup. Josh Anderson was part of the Swift Current Broncos who won the title in 2017-18. The Avalanche have also invited Kevin Davis, who’s offensive abilities have been shown over the past few years. Over the past two seasons, he has recorded 124 points (19G-105A) in 143 games.

Nothing like a little firefighter training to cap off Development Camp!#GoAvsGo https://t.co/O9DtnDTk08

The Dallas Stars are building a team around former WHL player Jamie Benn, and are hoping they found more late round “diamonds” in the previous few drafts. Jermaine Loewen has one of the more interesting stories coming into the WHL and NHL Draft. Originally from Jamaica, Loewen was adopted by a family in Canada and fell in love with the game of hockey as most Canadians do. Fast forward 12 years and he has become the first Jamaican born player to be drafted by an NHL team. Last season, Loewen posted 64 points (36G-28A) in 66 games. Additionally, Barteaux increased his scoring exponentially this season scoring 32 points (3G-29A) after recording a total of four points over the previous two seasons.

We're hitting the ground running as Development Camp begins tomorrow. Camp is free and open to the public, and will run from Monday to Friday at DPSC Frisco. https://t.co/QSELLleuMx

"The effort you put in here is going to decide how quick you make it to the NHL." Jim Nill speaks to Dallas Stars prospects on the first day of Development Camp. pic.twitter.com/bLLXy4uKCR

The Wild drafted both Shaw and Dewar in the third round of their respective draft years. Shaw was excellent in the 2016-17 season with the Medicine Hat Tigers, posting 94 points (27G-67A) in 71 games. Dewar recorded his first point-per-game season last year, recording 68 points (38G-30A) in 68 games. He added 26 points (12G-14A) in 22 playoff games. Brennan Menell signed with the Wild as a Free Agent. The former Lethbridge Hurricane was known for his offence, posting 71 points (12G-59A) in 70 games in his last WHL season. His 59 assists were enough to pace the WHL among defenceman.

#mnwild hosting Development Camp July 10-15 with free and open to the public scrimmages on July 12 & 15.

The Nashville Predators have become an extremely competitive team over the past few years, loading up on talent like WHL Alumni Ryan Johansen. They look to add more WHL talent with their most recent fifth-round selection. Yeryomenko, a native of Belarus, played his previous two seasons in the WHL. This past season he posted 41 points (13G-28A) in 63 games. The puck-moving defenceman also competed for his country, posting four points in six games and being named a top three player on his team. In Free Agency, the predators signed Tanner Jeannot. Jeannot recorded 80 points last season (40G-40A) in 72 games.

The guys out here helping Nashville teachers get supplies and prepare for the new school year 👌 #PredsDevCamp pic.twitter.com/e8zl16l4UN

All three WHL players attending the Blues Development Camp were selected by the Blues in the fourth-round of the NHL Entry Draft over the past four years. Kaspick was selected in the 2016 draft. Last season he scored 64 points (25G-39A) in 60 games with the Brandon Wheat Kings and Victoria Royals. He also won the Ed Chynoweth Cup with Brandon in 2015-16 and was the Scholastic Player of the Year in that same season. The Blues most recent fourth round pick was Joel Hofer. Hofer backed up Stuart Skinner while winning the Ed Chynoweth Cup this past season while recording a 2.61 GAA and .914 SVS% in 19 games.

When you trade in hockey sticks for paintball guns, things get competitive. And a little crazy. https://t.co/OvKECssMYD #stlblues

The Winnipeg Jets have built a solid team that includes WHL alumni Adam Lowry, Josh Morrisey, and Dustin Byfuglien among others. They’ve used their draft picks to accumulate a couple more in Jansen Harkins (second round in 2015) and Skyler McKenzie (seventh round in 2017). Harkins finished his WHL career with 242 points (75G-167A) in 275 games. McKenzie recorded 171 points (89G-82A) in 144 games over the past two seasons with Portland. Reichel, a free agent invite, played only one season in the WHL, posting 57 points (34G-23A) in 63 games.

Extremely honoured and proud to have signed my first NHL contract with the @nhljets I wouldn’t be where I am today without the love and support from my family, friends, agent, teammates, coaches and the entire @pdxwinterhawks Very excited for this new chapter in my life pic.twitter.com/TTGNWnvENd

A look into this morning’s dev camp session! 👀 pic.twitter.com/tLFIPc9VbM