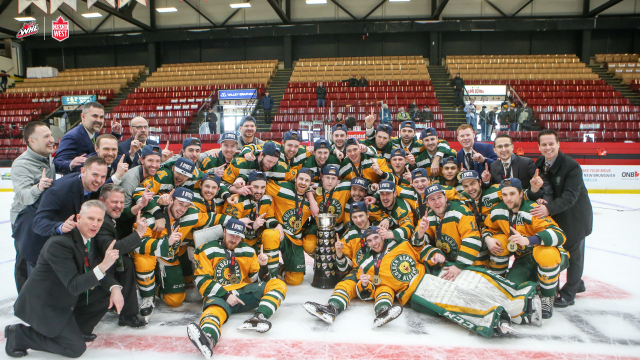 This is the third University Cup title for Alberta in five years, after winning back-to-back titles in 2014 and 2015. Their 16 overall national championships are the most in Canadian University history, six more than the University of Toronto Varsity Blues.

“I’ve raised this trophy once as a player and it’s now three times as a coach and my first time as a head coach,” said an emotional Serge Lajoie, head coach of the Golden Bears. “I told the guys between the second and third period that Clare Drake would be very proud of us.”

After trailing by two goals early in the first, the Golden Bears battled back to level the game at two, with Tomchuk scoring the eventual game-winner early in the second period.

“The coaches gave me an opportunity, and I was the lucky one to score,” said Tomchuk on the winner. “There’s 26 other guys that got us here. Without them, I wouldn’t have scored that goal. It was just hard work. I kind of blacked out. I just remember being out in front and hammering it home, and the boys pulled through for the rest of the game.”

Just as they did against Saskatchewan in the semifinal, Alberta was able to erase the early 2-0 deficit. Legault opened the scoring for the Bears, hammering in rebound off a Clayton Kirichenko point shot. Philp, who also scored a key goal in the semifinal win, levelled the game at two just 43 seconds later, beating St. FX starter Chase Marchand with a quick wrist shot from the slot.

Alberta opened the second period with serious momentum, with Tomchuk’s goal giving them the first lead of the game. Off a Marchand save and a scramble in front, Tomchuk tapped in a cross-ice feed from Taylor Cooper for his first goal of the season.

Arguably the best chance for St. FX to even the game came in the third, when they had over four continuous minutes of powerplay time, including an extended five-on-three. However, the Golden Bears penalty kill managed to escape the threat, holding onto a 3-2 lead after 40.

The X-Men continued to pressure for the equalizer in the third, but Sawchenko stopped all nine shots he faced in the period, including a pair of pads saves from in tight. Crooks sealed the Alberta win with an empty netter in the final minute.

“They were pressing hard. They’re a really good team and they showed why they’re number two in the country,” said Sawchenko. “I had to take a few deep breathes and just tried to get through the last five minutes. Nobody wanted this game to go to overtime, and we had guys doing everything they could to hold on tight.”

“Guys really fight for each other and I got to see another side to this team. When push come to shove and they were required to play a different style they did it and took pride in it.” finished Lajoie. “They blocked shots, they made simple plays and for such a highly-skilled team, that speaks to their character. We are very fortunate as a coaching staff to work with these young men.”

About Canada West:
Canada West (CW) is the leading university athletic conference in the country and is home to champion student-athletes that excel in the classroom and their communities. Canada West and our 17 members from across British Columbia, Alberta, Saskatchewan and Manitoba collectively carry on a legacy of competitive excellence, as our champions proudly go on to represent the conference at U SPORTS national championships.