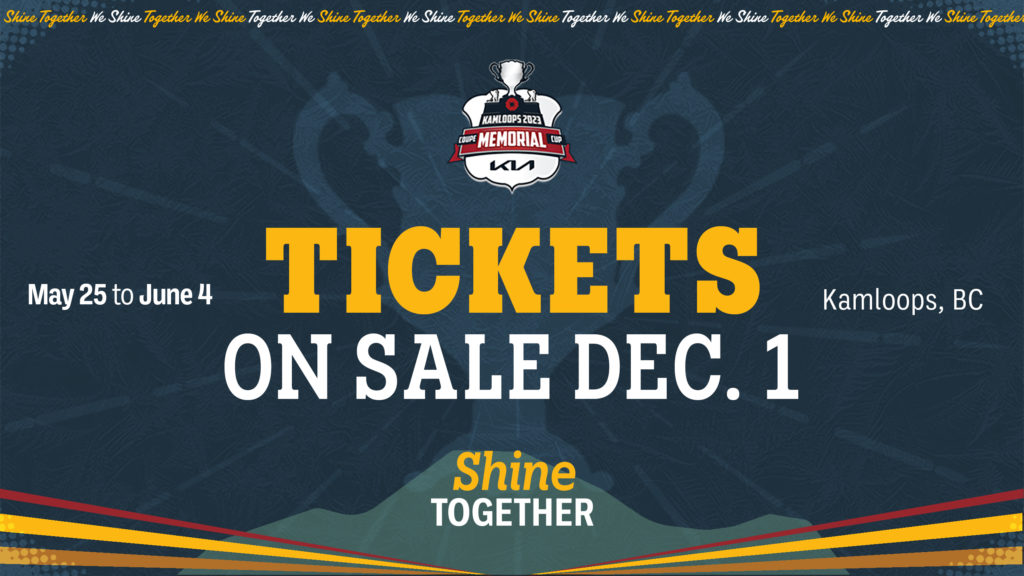 The Canadian Hockey League announced Monday that ticket packages to the 2023 Memorial Cup presented by Kia in Kamloops, B.C., will be available beginning Thursday, December 1.

Full tournament packages to the 2023 Memorial Cup presented by Kia counting all eight games plus an if necessary tie-breaker will be available priced at $600 plus GST and applicable fees. With limited tickets available, fans are encouraged to act quickly to secure their seat to the 2023 Memorial Cup presented by Kia by visiting Ticketmaster.ca. Fans who purchase prior to December 15 will receive a printed Commemorative Souvenir Ticket Package.

“As our host committee gets down to work, exciting details are coming together making this event come to life,” said Host Organizing Committee chair Yves Lacasse. “‘Shine Together – Together We Shine’ is a great representation of what we are striving to achieve both inside the arena and out.”

Added Blazers president Norm Daley, “Our goal is to give all the teams the opportunity to play before a packed arena each night. We want you to feel the excitement throughout the stands and streets of Kamloops. Whether you are a local, or from anywhere in our great country, get your tickets quickly to join us in the excitement.”

The 2023 Memorial Cup presented by Kia promises to be an engaging and inclusive event where hockey fans of all backgrounds are invited to shine together to showcase the Kamloops community. Hosted by the Kamloops Blazers from May 26 to June 4, the 2023 Memorial Cup presented by Kia returns to the Tk’emlúps te Secwépemc territory for the first time since 1995.

This season, the Blazers have recorded 26 points in 20 games to sit second in the Western Hockey League’s B.C. Division and earn national recognition four times in the Kia CHL Top-10 Rankings. The Blazers are three-time Memorial Cup champions, having captured CHL supremacy in 1992, 1993, and 1995.

More details regarding the 2023 Memorial Cup presented by Kia including volunteer sign-up information will be announced at a later date.

About Kia Canada
Kia Canada Inc., founded in 1999, is a subsidiary of Kia Corporation based in Seoul, South Korea. The company employs 170 people at its headquarters in Mississauga, Ontario, as well as in locations across Canada and at its regional office in Montréal, Québec. Kia offers products and services that are innovative, dynamic, thoughtful and award-winning, through a network of 197 dealers across the country. The company’s brand slogan – ‘Movement that inspires’ reflects Kia’s commitment to inspiring consumers through its products and services. To learn more, visit kia.ca or Facebook, LinkedIn, Twitter and Instagram.