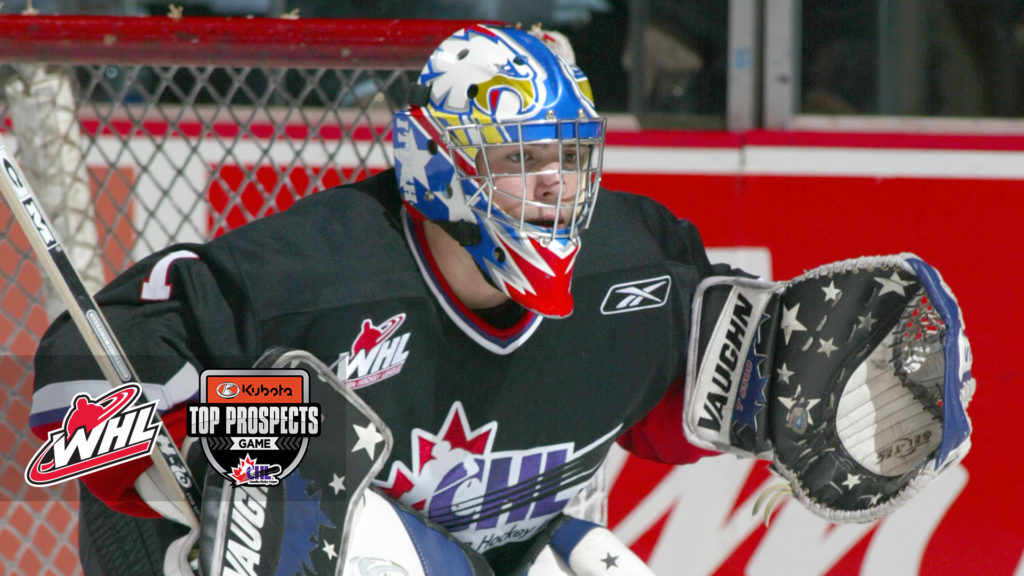 The 2023 Kubota CHL / NHL Top Prospects Game descends on the Langley Events Centre this week, marking the third occasion in which the Lower Mainland of B.C. has played host to the event.

In advance of a Wednesday night showdown featuring some of the top talent available for the 2023 NHL Draft, let’s look back at some of the CHL events that have taken place in Vancouver in years past.

1977 – Memorial Cup
The Pacific Coliseum in Vancouver, then the home of the NHL’s Vancouver Canucks, played host to its first Memorial Cup tournament in May of 1977, with the hometown New Westminster Bruins representing the WHL. Forward Stan Smyl, who will serve as a celebrity guest coach at the 2023 Kubota CHL / NHL Top Prospects Game, helped the Bruins become third time lucky at the event. After losses in 1975 and 1976, New Westminster defeated the Ottawa 67’s 6-5 in the final to capture the championship. Bruins defenceman Barry Beck earned MVP honours before being selected second-overall by the Colorado Rockies in the 1977 NHL Draft.

2005 – CHL Top Prospects Game
Team Cherry doubled up Team Davidson 8-4 in front of an event-record 16,331 fans at the Pacific Coliseum at the 2005 Top Prospects Game January 19, 2005, and a pair of WHL players earned Player of the Game nods. Vancouver Giants forward Gilbert Brule was Player of the Game for Team Cherry, while Lower Mainland product and Moose Jaw Warriors forward Kenndal McArdle earned Player of the Game honours for Team Davidson, matching Brule’s output with two goals. Both players were first-round picks in the 2005 NHL Draft before facing each other in the 2006 WHL Championship series, a best-of-seven won by Vancouver in four games. Following a trade to the Giants, McArdle closed out his WHL career with a Memorial Cup title in his hometown.

2007 – Memorial Cup
After a thrilling seven-game WHL Championship series, the Vancouver Giants and Medicine Hat Tigers both qualified for the 2007 Memorial Cup in Vancouver, again held at the Pacific Coliseum. There, they were joined by a pair of American teams: the Plymouth Whalers represented the OHL, while the QMJHL was represented by the Lewiston MAINEiacs. Vancouver and Medicine Hat seemed destined to meet in the final and as luck would have it, meet in the final they did, with Vancouver avenging its WHL Championship series loss with a 3-1 victory in front of a packed house on Renfrew Street.

2016 – CHL / NHL Top Prospects Game
The Top Prospects Game returned to the Pacific Coliseum for a second time in 2016, with over 10,000 fans attending a 3-2 Team Orr victory over Team Cherry January 28, 2016. Everett Silvertips netminder Carter Hart turned aside 15 of 16 shots after securing the start in goal for the victors, while Vancouver Giants forward Ty Ronning scored one of Team Cherry’s two goals.

2019 – WHL Championship Series
The WHL Championship Series landed at the Langley Events Centre in the spring of 2019 and as was the case twelve years earlier, fans were treated to a seven-game thriller. Games 3, 4 and 5 between the Vancouver Giants and Prince Albert Raiders were staged in Langley, with the visitors jumping out to a 3-1 series lead after 8-2 and 1-0 victories in Games 3 and 4. The Giants faithful sent their Club back to Saskatchewan with some momentum after Game 5, however. Defenceman Dylan Plouffe’s goal midway through the second period stood up as the decided in a 4-3 Vancouver victory in front of a sold-out crowd of 5,033. The Raiders would go on to win the series in seven games, with Lower Mainland product Dante Hannoun scoring the Championship-winning goal in overtime.

2019 – NHL Draft
A trio of WHL players were heard their names called early on at the 2019 NHL Draft in Vancouver. Saskatoon Blades forward Kirby Dach went third-overall to the Chicago Blackhawks, Vancouver Giants defenceman Bowen Byram was the fourth-overall selection by the Colorado Avalanche, and Lethbridge Hurricanes forward Dylan Cozens was picked at number seven in an NHL Draft that featured a total of seven first-round selections from the WHL. In all, 28 WHL players were drafted at the event, and in the three-and-a-half years since, 11 of those players have skated in at least one NHL game.

With the 3rd pick in the 2019 #NHLDraft, the Chicago Blackhawks select C Kirby Dach! pic.twitter.com/XgV9yJmon2