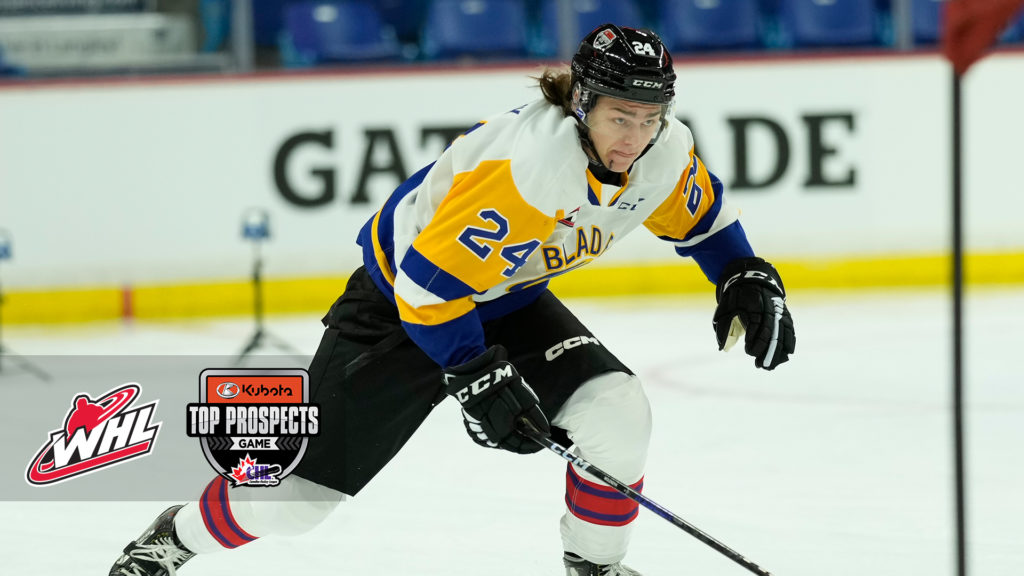 A total of 18 WHL players will compete Wednesday in the 2023 Kubota CHL / NHL Top Prospects Game in Langley, B.C., as Team Red looks to collect victories in back-to-back years versus Team White.

Watch the game live on TSN in Canada and NHL Network in the United States, with puck drop from the Langley Events Centre set for 7:00 p.m. PT.

Here are the WHL players that will skate with Team White Wednesday!

Nate Danielson, F, Brandon Wheat Kings
Wheat Kings centre Nate Danielson leads his Club in scoring with 56 points ahead of Wednesday’s Top Prospects Game, scoring three or more points in a contest on three occasions this season, most recently against Portland January 6. Danielson, from Red Deer, Alta., is the 13th-ranked North American Skater on NHL Central Scouting’s list and is one of three Team White forwards from the WHL to be in their first year of NHL Draft eligibilty in 2023 despite being born in 2004.

Lukas Dragicevic, D, Tri-City Americans
Dragicevic set an Americans franchise record with a 27-game point streak earlier this season and leads all WHL blueliners in scoring with 51 points. From Richmond, B.C., the right-shot rearguard sits #12 among North American skaters according to NHL Central Scouting and has one WHL Player of the Week honour to his name so far this season.

Kalan Lind, F, Red Deer Rebels
In addition to his 41 points on the season, Lind leads the Red Deer Rebels with 72 penalty minutes during the 2022-23 campaign and joins older brother Kole (2017) in competing in the CHL / NHL Top Prospects Game. From Shaunavon, Sask., Lind helped Canada win gold at the 2022 Hlinka Gretzky Cup in his home arena, the Peavey Mart Centrium, last August. He is the #23 North American Skater on the NHL Central Scouting list.

Jaden Lipinski, F, Vancouver Giants
Lipinski has enjoyed a breakout season with Vancouver, scoring 14 times and totalling 33 points through 43 games this season. The 6-foot-4 forward is the lone Giant competing in this year’s game and first since Justin Sourdif in 2020. The product of Scottsdale, Ariz. is ranked #38 among North American Skaters in the most recent NHL Central Scouting rankings.

Tanner Molendyk, D, Saskatoon Blades
McBride, B.C.’s Tanner Molendyk joins Dragicevic and Price in representing the WHL on the Team White blueline. With the high-flying Blades, Molendyk has already doubled his goals total from a season ago, and is one of three Saskatoon defenders with 24 or more points on the season. His plus/minus is best on the team by 10 points at +28. Molendyk is the #36 North American Skater on the NHL Central Scouting Mid-Term Rankings.

Caden Price, D, Kelowna Rockets
Price mans the Rockets blueline and leads the Club with 23 points from the back end so far this season, and only three Rockets have more shots on goal than the 97 credited to Price in 2022-23. From Saskatoon, Sask., Price is the 30th-ranked North American skater in the NHL Central Scouting rankings.

Scott Ratzlaff, G, Seattle Thunderbirds
Goaltender Scott Ratzlaff becomes the second player in as many years to represent Irma, Alta. in the Kubota CHL / NHL Top Prospects Game. The reigning WHL Goaltender of the Month holds a 16-5-0-1 record to this point in the season and leads the League with four shutouts in 2022-23. Ratzlaff is the sixth-ranked North American Goaltender in the most recent NHL Central Scouting Rankings.

Jackson Unger, G, Moose Jaw Warriors
Jackson Unger earned his first career WHL Playoffs victory this past spring, helping the Warriors reach the Second Round. The product of Calgary, Alta. has five wins to his name this season in a tandem with 20-year-old Connor Ungar, including a triumph November 30, 2022 at the Langley Events Centre. Unger is ranked #17 among North American Goaltenders in the NHL Central Scouting Mid-Term Rankings.

Brayden Yager, F, Moose Jaw Warriors
Yager, the reigning WHL and CHL Rookie of the Year, has again helped pace a potent Moose Jaw offence this season, collecting 54 points in 46 games to sit second in team scoring. The product of Saskatoon, Sask. has 14 multi-point games to his credit, and will serve as one of Team White’s alternate captains at this year’s event. Yager is the fifth-ranked North American Skater in the NHL Central Scouting rankings, second highest among WHL skaters.

Koehn Ziemmer, F, Prince George Cougars
Ziemmer sits tied for third in WHL scoring with 62 points this season and is coming off a 30-goal campaign for the Prince George Cougars in 2021-22. The product of Mayerthorpe, Alta. is the reigning WHL Player of the Week after recording a trio of multi-goal games last week in Calgary, Red Deer and Edmonton. Tonight, he will oppose Cougars teammate Riley Heidt, who will skate for Team Red. Ziemmer sits #20 among North American Skaters in the NHL Central Scouting Mid-Term Rankings.