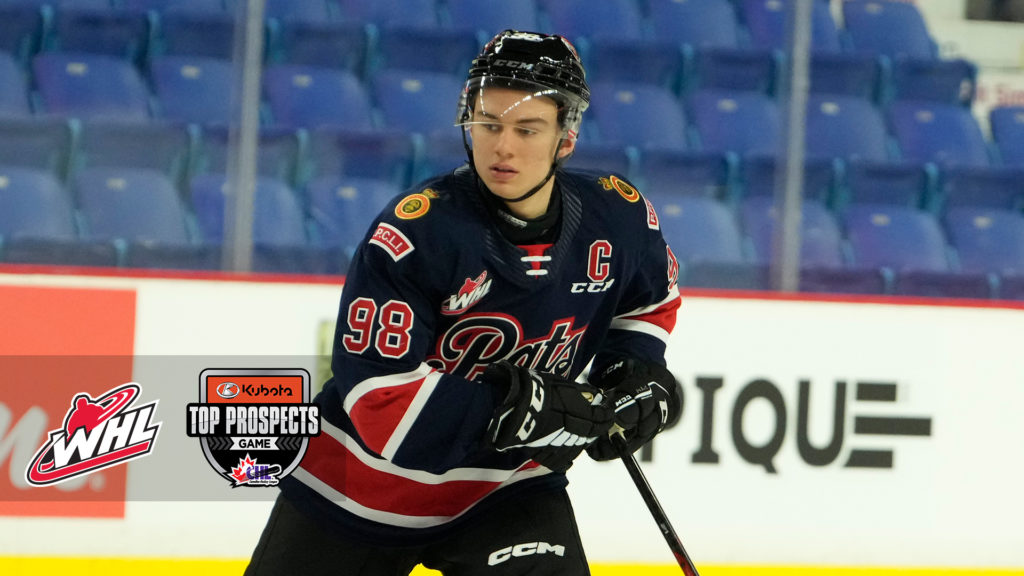 A total of 18 WHL players will compete Wednesday in the 2023 Kubota CHL / NHL Top Prospects Game in Langley, B.C., as Team Red looks to collect victories in back-to-back years versus Team White.

Watch the game live on TSN in Canada and NHL Network in the United States, with puck drop from the Langley Events Centre set for 7:00 p.m. PT.

Here are the WHL players that will skate with Team Red Wednesday!

Carson Bjarnason, G, Brandon Wheat Kings
Bjarnason, the top-ranked North American Goaltender in NHL Central Scouting’s Mid-Term Rankings, heads to the 2023 Kubota CHL / NHL Top Prospects Game as the reigning WHL Goaltender of the Week after a pair of victories this past weekend. This season, Bjarnason has collected 17 victories in his first campaign as the number-one netminder with the Brandon Wheat Kings, boasting a .913 save percentage along the way.

Connor Bedard, F, Regina Pats
The Pats captain has been the pre-eminent player in the WHL this season, leading the League with 39 goals and 81 points. Bedard, from North Vancouver, B.C., has recorded at least a point in his last 32 contests with Regina, scoring 12 times in five games with the Pats since returning from a gold-medal performance with Canada at the 2023 IIHF World Junior Championship. Bedard is the top-ranked North American Skater in NHL Central Scouting’s Mid-Term Rankings.

Zach Benson, F, Winnipeg ICE
Hailing from Chilliwack, B.C., forward Zach Benson returns close to home this week to represent the Winnipeg ICE at the 2023 Kubota CHL / NHL Top Prospects Game. Benson leads the top-ranked ICE with 65 points this season, second only to Bedard in League scoring, to go along with a whopping +38 rating. He is one of three WHL forwards in the top 10 among North American Skaters in the most recent NHL Central Scouting Rankings, sitting at #7.

Luca Cagnoni, D, Portland Winterhawks
Undrafted in the WHL Prospects Draft, Luca Cagnoni has carved a starring role on the Portland Winterhawks blueline since joining the Club during the shortened 2020-21 WHL season. The product of Burnaby, B.C. has put up 40 points (9G-31A) in 41 games with the Winterhawks, who are neck-and-neck with first-place Seattle in the U.S. Division standings as we approach the month of February. Cagnoni, the #34 North American Skater in the NHL Central Scouting Rankings, has collected a dozen multi-point games in Portland this season.

Riley Heidt, F, Prince George Cougars
Saskatoon, Saskatchewan’s Riley Heidt is one of seven WHL players with 60 or more points on the season, and his 41 assists are tied for second in the League. Heidt, who holds the role of top-line centre with the Prince George Cougars, has already surpassed his points total from the 2021-22 campaign, while his 19 goals are two shy of last year’s total. Heidt is one of two Cougars to take part in this year’s Kubota CHL / NHL Top Prospects Game; his linemate in Prince George, Koehn Ziemmer, will skate with Team White. Heid is ranked #26 among North American Skaters by NHL Central Scouting.

Connor Levis, F, Kamloops Blazers
Levis, the reigning WHL Scholastic Player of the Year, sits at #60 on the NHL Central Scouting North American Skater rankings ahead of Wednesday’s contest. From Vancouver, B.C., the 6-foot-2 Levis has collected 35 points with the Kamloops Blazers this season ahead of a spring that will see the Club host the 2023 Memorial Cup.

Gracyn Sawchyn, F, Seattle Thunderbirds
Sawchyn has impressed in his first WHL season after joining the Thunderbirds from the U.S. National Team Development Program. His 31 assists and 44 points both rank second among WHL rookies this season; he enjoyed a run of four consecutive multi-point efforts from December 16-27, capped off by a two-goal, two-assist performance versus Spokane. Sawchyn, who hails from Grande Prairie, Alta. by way of Minnesota, is ranked #42 among North American Skaters by NHL Central Scouting.